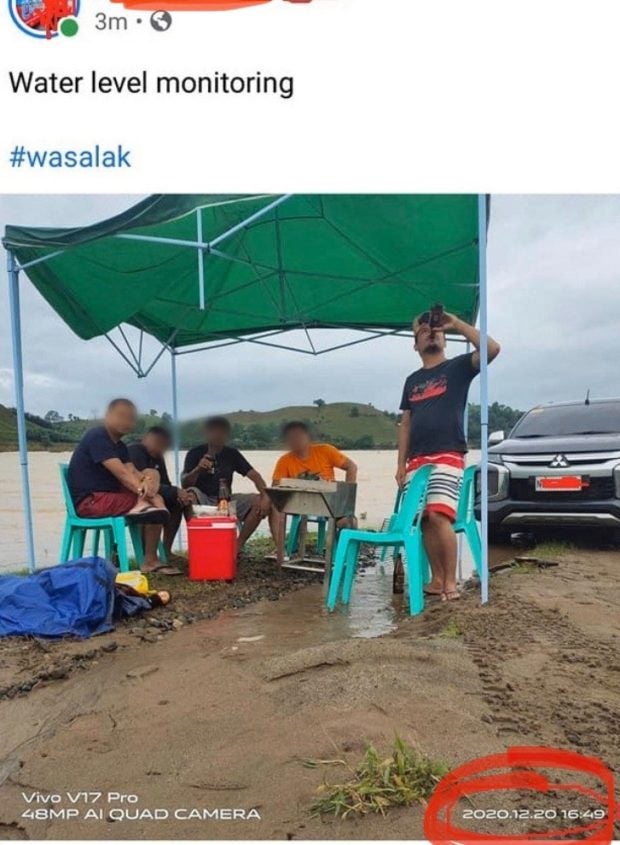 SAN MARIANO, Isabela—An employee of the municipal disaster risk-reduction and management office (MDRRMO) has been suspended from work after he posted on Facebook a photo of him and four others having a drinking session while monitoring rising floods here on Sunday (Dec. 20).

Mayor Edgar Go said he has ordered the six-month suspension of Yugi Boy Guzman, a rescuer and driver of the MDRRMO, for the alleged misdemeanor and violation of the liquor ban.

“I will not tolerate such a misdemeanor. As a member of the MDRRMO, he should know,” Go told the Inquirer on Wednesday (Dec. 23).

Isabela is still on general community quarantine and a liquor ban is in effect from Dec. 16 to 30.

A liquor ban came into effect during the widespread flooding in the province during the weekend.

Guzman, who has yet to issue an official statement, has reportedly told Go that he was off-duty at that time.

But Go said rescuers were supposed to be on 24-hour duty during disasters “and there is no reason to drink while monitoring the water level of the river.”

Go noted that the posted photo was a “clear evidence of the violation.”