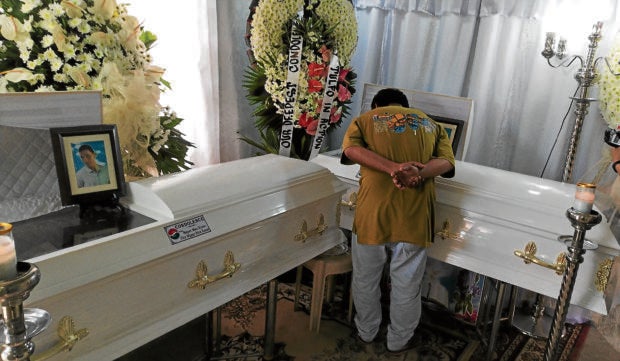 MOURNING AT CHRISTMAS Florentino Gregorio, 53, on Tuesday mourns the deaths of his wife and son during what is supposed to be the happiest time of the year. On Sunday, just six days before Christmas, an off-duty policeman shot them dead over a right-of-way problem in their neighborhood in Paniqui, Tarlac province. The authorities have brought double-murder charges against the officer. —MARIA ADELAIDA CALAYAG

Lawmakers on Tuesday urged reforms in and a thorough evaluation of the 120,000-strong Philippine National Police (PNP) amid public outrage sparked by the killing of a 52-year-old woman and her 25-year-old son in Paniqui, Tarlac province, by an off-duty policeman on Sunday.

Nuezca, a crime scene investigator with the Parañaque police, shot dead his neighbors Sonya Gregorio and her son Frank Anthony Gregorio with his 9mm M-92 service pistol at Barangay Cabayaoasan, Paniqui, as people from the area watched.

Videos of a confrontation between Nuezca and the Gregorios and its bloody aftermath were shared on Facebook and Twitter, generating widespread public anger at the PNP at a time when the organization of supposedly civilian but military-clad and ranked law enforcers was under fire for increasing officer abuses and impunity.

Video images showed Nuezca shooting the mother point-blank in the head, then the son twice before shooting the mother again as she lay on the ground. Then Nuezca got his jacket and helmet, and drove away on a motorcycle with his young daughter as if nothing had happened.

“This policeman is a different kind. He has a mental problem. Crazy. And I’m just wondering why he was able to pass the neuro,” Duterte said, referring to the neuropsychiatric test that police recruits must pass.

Double-murder charges (or two counts of murder) have been brought against Nuezca in a Paniqui court. The prosecutor has recommended no bail.

Duterte told the PNP to make sure Nuezca remained behind bars.

On Tuesday, congressmen proposed solutions to problems hounding the PNP.

“Any instance where the loss of an innocent life occurs by the hands of those who swore to protect is one life too many,” Tambunting said.

She said law enforcement authorities should ensure government-issued firearms were not used for crime.

Tambunting also called for a thorough investigation of the “absolute tragedy” in Paniqui involving Nuezca.

Davao del Norte Rep. Pantaleon Alvarez reiterated his call for Police Gen. Debold Sinas, the PNP chief, to resign if he could not reform the force. Failure of leadership is not acceptable, Alvarez said.

“Reorganize is not the right term. We need to overhaul and fix the ranks of our police force,” Alvarez said.

“I think that is already a psychological disorder,” he said, referring to Nuezca’s actions and those of other officers involved in crime. “As if they feel that just because they wield that gun they can do anything they want. As if it’s so easy to end a person’s life,” he said.

Marikina City Rep. Stella Luz Quimbo agreed, stressing that the “horrible incident points to a systemic problem in how we prepare and evaluate those who police our citizens.”

“The presence of the police should give a sense of calm, not fear. We cannot afford to lose more lives because of impunity in the system, or the policies which lend to unpreparedness or abuse of law enforcement officials, including the use of firearms while off-duty. One death is one too many,” she said in a statement.

Quimbo also filed a resolution urging the House of Representatives to investigate the Paniqui killings and to look into “the implementation of current policies, protocols, and rules of the PNP in ensuring that all its personnel possess the necessary technical knowledge and psychological fitness and preparedness in the performance of their duties, including policies on circumstances which warrant the use of firearms.”

Muntinlupa Rep. Ruffy Biazon said the dismissal of two cases for misconduct against Nuezca in 2019 for lack of evidence and witnesses showed the need for reform in the PNP’s operational procedures on evidence gathering and preservation.

In a statement, Biazon said the House may conduct an inquiry to evaluate and identify reforms or specific solutions to flaws in police procedures that may require legislation.

On Monday, the Makabayan bloc in the House filed a resolution condemning the killing of the Gregorios and seeking an inquiry into the “continuing police brutality in the country.”

The PNP rejected any “knee-jerk reaction” to the killings that demanded reforms in the police force.

Police Brig. Gen. Ildebrandi Usana, spokesperson for the PNP, said the police would “welcome any suggestion” but insisted that Nuezca was not representative of the whole police force.

“Nuezca is just a fallen leaf. One fallen leaf does not make the entire forest,” Usana said.

The PNP, he said, would resist any calls to change despite the clamor from its critics.

“[S]ome critics of the government are already taking advantage of this isolated incident to make [themselves] look good and the government look bad. They will not prevail,” Usana said.

The PNP, however, will respect comments and suggestions from “well-meaning” people, he said.

“Perhaps, we just have to look into improving our anger management intervention and use of force continuum principles,” he added.

In a post on Facebook after the Paniqui shootings, Buraga said even senior citizens should respect police officers.

A report from Bato Mayor Juan Rodulfo addressed to Police Col. Brian Castillo, the Catanduanes police chief, led to the sacking of Buraga.

Usana confirmed that Buraga had been sacked. He said Buraga’s remarks were “disrespectful and uncalled for,” and that Buraga did not speak for the PNP. —REPORTS FROM JULIE M. AURELIO, LEILA B. SALAVERRIA, PATRICIA DENISE M. CHIU AND SUZENE CAJEGAS INQ