Sinas says video of Tarlac murders strong evidence but girl, 16, who took it has to testify 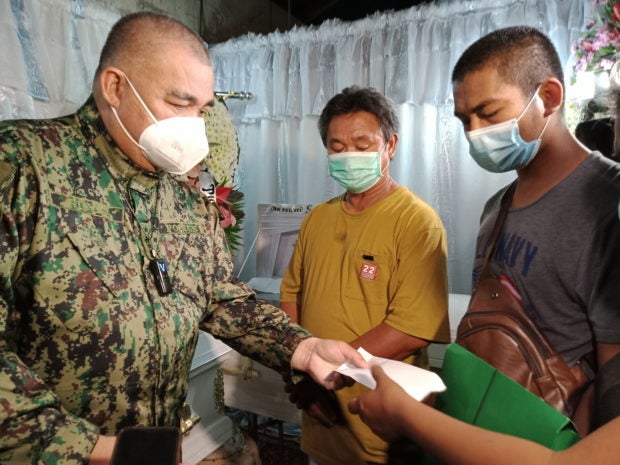 PNP chief Gen. Debold Sinas hands an envelope to the family of Sonya Gregorio and her son Frank Anthony who were shot at close range by policeman Jonel Nuezca. MARIA ADELAIDA CALAYAG

PANIQUI, TARLAC–Philippine National Police chief Gen. Debold Sinas on Tuesday (Dec. 22) said police would ask a 16-year-old girl who took a video of the fatal shooting of a woman and her son here by a policeman to testify.

“The video is strong evidence,” Sinas told the victims’ family during his visit to the wake of Sonya Gregorio and her son, Frank Anthony.

“I hope that the other witnesses will help us with the case. We will continue to talk to them,” Sinas said.

Sinas said investigators were already talking to the teenager’s grandmother for her consent on her granddaughter giving testimony.

Sinas handed his calling card to Florentino Gregorio, the husband and father of the victims, and gave assurance that the family was safe.

The policeman, Senior MSgt. Jonel Nuezca, is detained at the Paniqui town police station. He had been indicted for two counts of murder.

“If you have any problem, text me,” Sinas told Florentino.

“This is our help and not payment,” Sinas told Florentino. “The case is already strong, there’s evidence.”

“What we are trying to convince is the one who took the video we will talk to her to make our case stronger,” Sinas said.

“What we really want is justice,” Florentino said in reply to Sinas.

Read Next
Zarate replies to Duterte rant: My son’s education in Poland funded by legit money
EDITORS' PICK
Geek out at TOYCON 2022 powered by Smart Signature
Unemployment rate up to 6% in May
Bye bye Boris: UK PM Johnson bows out with regrets but no apologies
House energy committee chair Arroyo bats for cheap electricity
High inflation: Your P1 is now worth only 87 centavos
High-risk pregnancy: Reducing your risk is in your hands
MOST READ
Suspect in grisly killing of missing woman in Bulacan arrested
Kim Atienza’s daughter flaunts bikini body in response to critics of her ‘revealing photos’
Bongbong Marcos’ first order: Abolish PACC, Office of Cabinet Secretary
Ex-Defense chief Lorenzana is the new BCDA chair
Don't miss out on the latest news and information.