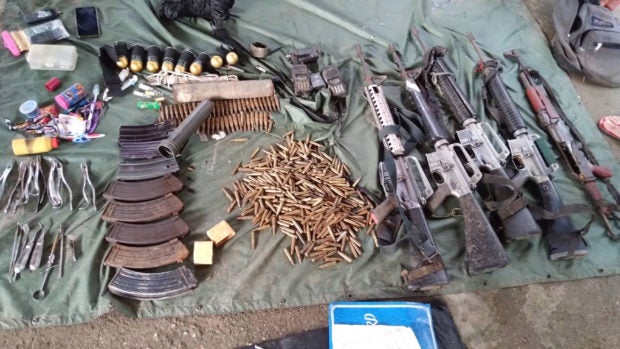 ILIGAN CITY—The northeastern Mindanao command of the Philippine Army has heightened preparedness for attacks by communist guerrillas during the Christmas holidays.

NPA, armed wing of Communist Party of the Philippines (CPP), said it was not observing a truce for the holidays after President Rodrigo Duterte declared there wouldn’t be any more ceasefire with communist guerrillas during his term.

Centino said, however, that the doors are open for the surrender of NPA fighters who would want to return to the folds of the law and live peaceful lives.

In Surigao del Sur, Brig. Gen. Allan Hambala, commander of the Army’s 401st Infantry Brigade, said there will be no letup in military operations in the absence of a Christmas truce.

“We spend our Christmas holiday differently  in the hinterlands, fighting and running after the NPA,” said Hambala.

On Dec. 18, an NPA guerrilla was  slain in an hour-long clash with soldiers at the village Magsaysay, Prosperidad town, Agusan del Sur province. The Army said soldiers captured a rebel camp during the clash.

Hambala said soldiers found four AK-47 rifles and an M-16 rifle after the clash between some 30 guerrillas and the 3rd Special Forces Battalion.

He said bloodstains left on the clash site and escape routes indicated the guerrillas suffered casualties.

Hambala said the NPA unit occupying the camp was responsible for the raid on a Coast Guard station in Barobo, Surigao del Sur in previous months.

Read Next
On AFP anniversary, Duterte honors soldiers for role in pandemic fight, calamity response
EDITORS' PICK
House energy committee chair Arroyo bats for cheap electricity
Guarding Sara: Why next VP is getting own security team
A massive highway complex makes living in the South highly attractive
Beyond the Chocolate Hills: A farm-to-table, heritage culinary adventure of Bohol
Metro Manila logged most number of new COVID-19 cases — OCTA Research
WHO says monkeypox is not yet a health emergency
MOST READ
2 foreigners die in Batangas
Guarding Sara: Why next VP is getting own security team
Bea Alonzo, under lie detector test, says she wants prenup agreement with future husband
Bongbong Marcos to designate Zagala as next PSG commander, senior military assistant
Don't miss out on the latest news and information.