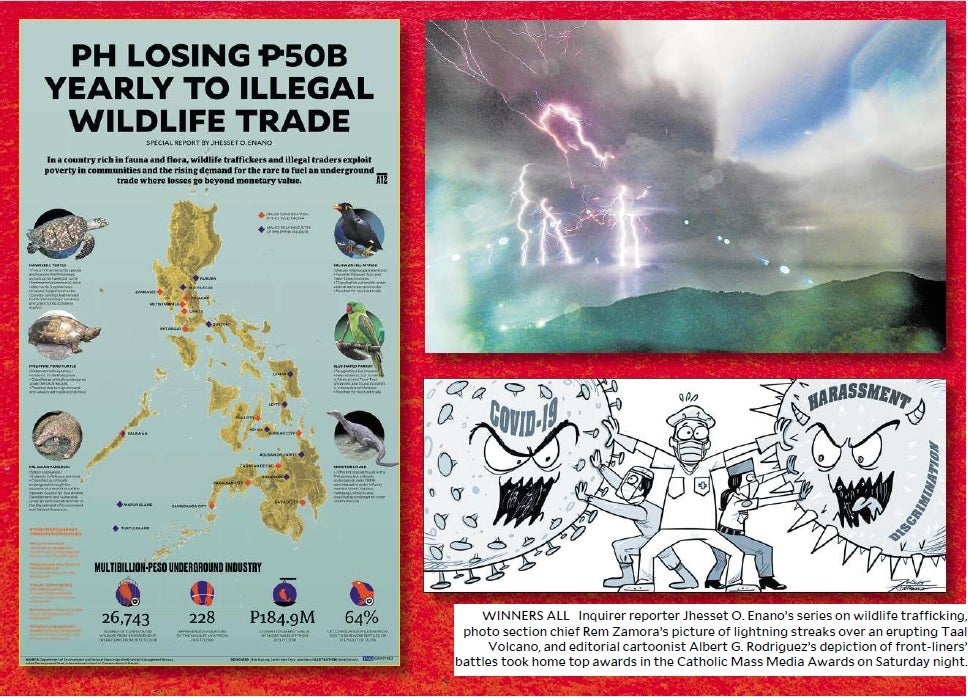 The Inquirer’s environment reporter Jhesset O. Enano took the best special feature award with her three-part series on wildlife trafficking and illegal trade in the Philippines, which was published in the newspaper in August 2019.

Also among the finalists in this category were Inquirer correspondent Karlston Lapniten and the Inquirer bureaus for their story on how the pandemic birthed Filipino heroes who were helping others cope with the crisis in the provinces, and Inquirer Visayas assistant bureau chief Ador Vincent Mayol, for his feature on the rising number of seniors abandoned by their children.

Among the seven finalists were entries from two other Inquirer photographers: “Must Make Room” and “Face Value” by Lyn Rillon, and “Life Lessons” by Richard A. Reyes.

The Inquirer’s resident cartoonist Albert G. Rodriguez bested three other finalists in the best editorial cartoon award with his “Double Danger” cartoon, which depicts how medical front-liners fight not only COVID-19 but also harassment and discrimination.

Also nominated in the category was former Inquirer cartoonist Stephanie Bravo-Semilla for her work “Intimidation.”

The pandemic forced the CMMA to adapt new ways to hold the awarding ceremonies on Saturday, such as the organizers having to digitally edit the winners’ photographs for the prerecorded telecast, to make it look like they personally received the awards from CMMA chair Edgard Cabangon and honorary chair Bishop Broderick Pabillo, apostolic vicar of the Manila Archdiocese.

Pabillo said the awards this year were aimed at honoring the “difficult but necessary work of media in our day-to-day life,” given the “many threats to their work” in the advent of fake news and cyberbullying.

“That’s why we consider them (the media), as front-liners,” he said. “There are creeping efforts to suppress press freedom and the freedom of expression. We need to encourage them in their work … this awarding is a sign of encouragement and appreciation for the difficult job that they’re doing.”

Since its inception in 1978, the CMMA has been honoring the best media works in radio, print, advertising, television, and film “that exemplify both technical excellence and the transmittal of human values.”