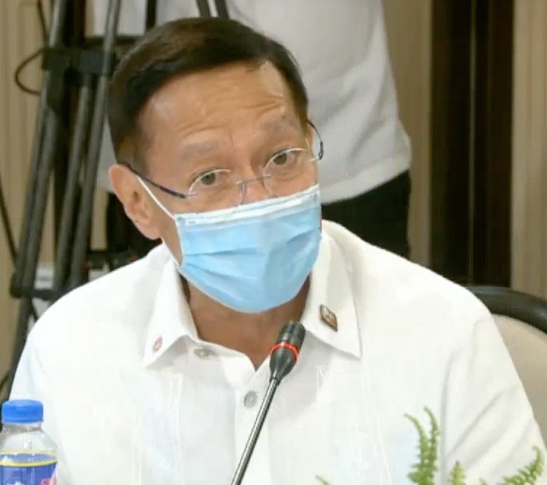 MANILA, Philippines — Health Secretary Francisco Duque III denied on Thursday that he did not act quick enough in signing the Confidentiality Disclosure Agreement (CDA) between the Department of Health and US drugmaker Pfizer as alleged by Senator Panfilo Lacson.

“I have the chronology of events so that this is all documented and there is no such a thing that I did not act quick enough,” he said in an interview over ABS-CBN News Channel.

Duque was reacting to the earlier statement of Lacson, who said that Duque’s indifference was to blame for failing to work on the necessary documentation for the deal with Pfizer.

“They could have secured the delivery of 10 million Pfizer vaccines as early as January next year, way ahead of Singapore but for the indifference of Sec. Duque failed to work on the necessary documentary requirement namely, the Confidentiality Disclosure Agreement (CDA) as he should have done,” Lacson earlier said.

Duque, however, explained that it was only on September 24 that the DOH was informed that instead of the Department of Science of Technology, the DOH would be the agency to sign the deal with Pfizer. He said the order came from the Office of the Executive Secretary.

“As a medical professional, my overriding principle in my practice of medicine is always to err on the side of caution, so I really needed to make sure that the concerned offices would clear the CDA document that was by the way only submitted [by Pfizer] on August 11,” said Duque.

“And up to that, that CDA was in fact intended to be signed per Pfizer request by the Office of the President, the Executive Secretary being the representative,” he added.

“That would have spared Pfizer from signing a confidentiality agreement with many other government agencies so isa na lang dapat (there should have been only one signatory),” he further explained.

However, Duque said there were “alterations” made and the legal departments of the DOST, Office of the Executive Secretary, and the DOH had to “clear the provisions of the non-disclosure agreement and we had to make sure that the provisions were not onerous or disadvantageous to the DOH and government.”