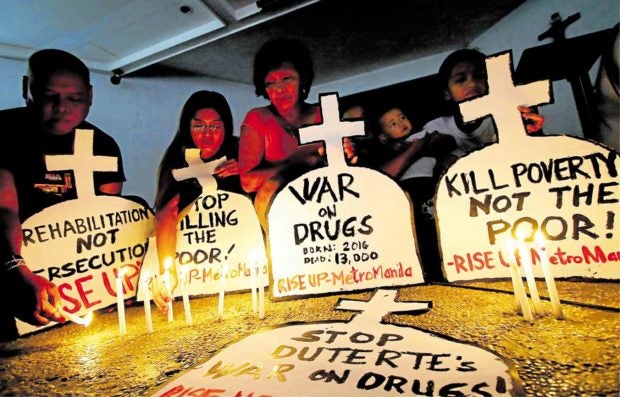 In this October 2019 photo, relatives of victims of so-called extrajudicial killings in the Duterte administration’s war on drugs light candles to call for justice for their slain loved ones. INQUIRER/RICHARD A. REYES

“The report of the International Criminal Court (ICC) that there is ‘reasonable basis’ to believe that crimes against humanity of murder, torture and the infliction of serious physical injury and mental harm as other inhumane acts were committed during the PH war on drugs campaign, was grossly unfair, unjustifiable and one-sided,” PDEA said in a statement.

“The [PDEA] remains skeptical on how the ICC came up with their findings solely on the basis of open-source information. Like all other well-founded reports, the ICC report should show proof and undergo the standard validation and vetting process before arriving at any firm conclusions,” it added.

The anti-drug agency also noted that the ICC should have allowed the Department of Justice (DOJ) to finish its probe on drug-related killings first.

“The ICC should have waited for the release of the report of an inter-agency panel created by the [DOJ] to investigate the apparent drug-related killings, rather than issuing general statements that are yet to be proven without the aid of a formal and local investigation,” said PDEA.

PDEA was referring to the DOJ panel that was created in June to look into the deaths in anti-illegal drug operations.

In a report released on Monday, ICC Prosecutor Fatou Bensouda found “reasonable basis to believe” that crimes against humanity of murder, torture, and the infliction of serious physical injury and mental harm were committed in the Duterte administration’s anti-drug drive.

Bensouda said her office will decide on whether to push through with an open investigation into the rights situation in the Philippines in the first half of 2021.

From July 2016 until October 31 this year, 5,942 people were already killed in anti-drug operations of law enforcers, PDEA said.