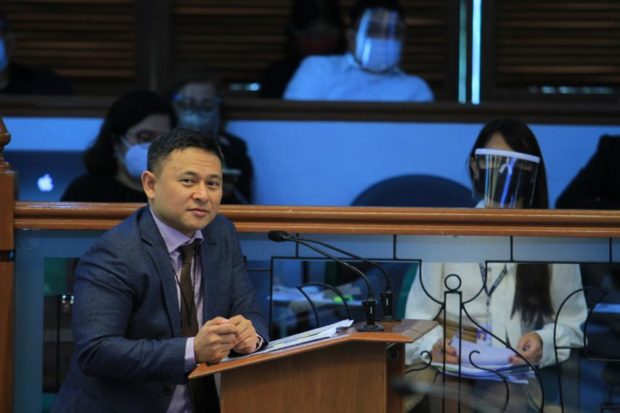 Senator Sonny Angara, chair of the Senate finance committee, sponsors in plenary two separate measures seeking to extend the availability of funds under the 2020 national budget and the Bayanihan to Recover as One Act. Photo courtesy of Sen. Angara’s office.

MANILA, Philippines — The Senate on Tuesday approved on third and final reading two separate measures that would extend the validity of the 2020 national budget and the Bayanihan to Recover as One Act or Bayanihan 2.

This comes as a total of P148 billion in appropriations under the said laws are still unreleased.

It was Senator Sonny Angara, chair of the Senate finance panel, who endorsed for plenary approval the two committee reports containing House Bills No. 6656 and 8063, which were approved on final reading by the lower chamber on Monday.

“Ultimately, it is the main goal that in extending the validity of appropriations in the 2020 General Appropriations Act or budget and in the Bayanihan 2 law, we are opening a wider window for the country to return to its original path of growth and development,” Angara said in sponsoring the bills.

The said House bills seek to extend the availability of appropriations under the 2020 General Appropriations Act until December 31, 2021, and the Bayanihan 2 until the end of June next year.

Citing data from the Department of Budget and Management (DBM), around four percent of the 2020 budget or P110 billion has yet to be released as of November 20 this year.

“With the adoption of the cash-budgeting system, that means this P110 billion would need to be obligated before the year ends or else these are returned to the national treasury,” Angara pointed out.

“With just a few weeks left in the year, it would be extremely difficult for agencies with pending releases to submit the required documents and secure the necessary approval,” he added.

Meanwhile, some P38 billion of the P140 billion funding under the Bayanihan 2 has yet to be released as of December 11, 2020.

“These unreleased balances add up to around P148 billion, which is no small amount. Allowing these appropriations to lapse amid a pandemic and a recession would have no small impact,” Angara said.

The proposed extension of the validity of both laws would allow the government to disburse the unspent funds beyond its initial expiration.

The Senate was able to immediately act on the passage of both measures because President Rodrigo Duterte certified their approval as urgent on Monday.