Tourists to S. Korea forecast to drop to 32-year low this year 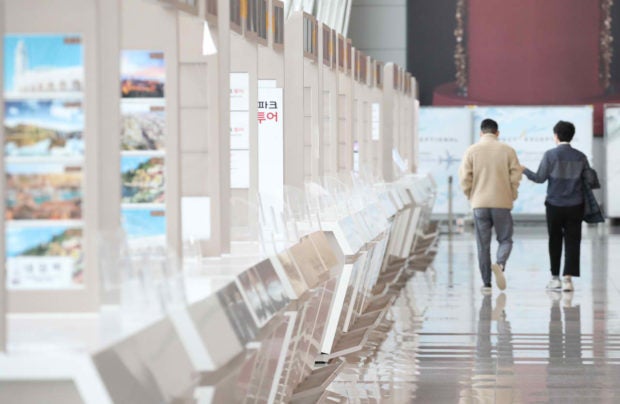 SEOUL — The number of overseas tourists visiting South Korea is expected to slump to the lowest level in 32 years amid the new coronavirus pandemic that has practically paralyzed the global tourism sector, data showed Tuesday.

The number of foreigners who visited the country in the January-October period reached 2.39 million, down 83.6 percent from the same period last year, according to the culture ministry and the state tourism office.

Roughly half of the figure — 1.27 million — was tallied in January. But after the country reported its first virus case in January, the number began to slide to 685,000 in February and 83,000 in March. The monthly average stayed at the 60,000 level throughout July to October.

If the decline continues, the number of incoming tourists is expected to total 2.5 million at the end of year, which would be the lowest since 2.34 million in 1988. The forecast is also a far cry from the government’s 20 million projection made earlier this year.

“The number of incoming tourists reached a record high last year and reported an on-year increase in January, which stoked expectations. But the target drifted away due to the new coronavirus,” an official at the Korea Tourism Organization said.

The number of Koreans traveling abroad was also expected to fall to the lowest level in 22 years.

The number of outgoing tourists came in at 4.12 million in the first 10 months of the year, slumping 83 percent from the previous year.

At this rate, the total number of Koreans who traveled abroad is forecast to reach 4.2 million this year, which is the lowest since 3.06 million in 1998, when the country was undergoing the Asian financial crisis.

Seoul has been tackling a resurgence in COVID-19 cases, with the number of daily cases spiking to a record high Sunday. The country added 880 more cases Tuesday, raising the total caseload to 44,363, according to the Korea Disease Control and Prevention Agency. Yonhap