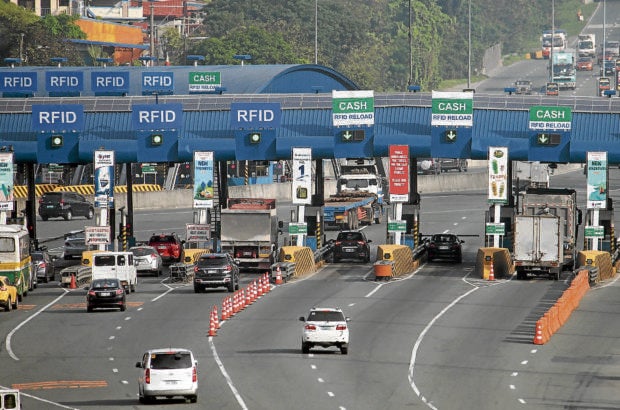 MANILA, Philippines — Interior Secretary Eduardo Año on Sunday urged local officials of Valenzuela City and executives of the tollway operator on the North Luzon Expressway (NLEx) to talk and find a fix to the monstrous vehicular congestion on the turnpike caused by the introduction of electronic toll collection.

In a radio interview, Año said the local government and NLEx Corp. should have planned together the shift from cash payment at the toll booths to avoid inconvenience to the public.

“Our local chief executives and local government[s] have a mandate to protect public interest, welfare and safety. So they exercise that if their constituents are affected,” Año said, indicating support for Valenzuela Mayor Rex Gatchalian’s decision to suspend NLEx Corp.’s business permit on Dec. 7, which threw the toll gates open, allowing free flow of vehicular traffic.

For years, the Department of Transportation (DOTr) had been trying to modernize toll collection on the expressways, but the system had never been perfected. But when toll collectors caught the new coronavirus that causes COVID-19, the DOTr made the shift to electronic toll collection mandatory starting Dec. 1 even though the tollway operators did not have failproof systems.

The result had been kilometerslong tailbacks on the expressways as radio frequency identification (RFID) tags and sensors failed to work. In Valenzuela, Año said “Earth stopped” as the tie-ups halted commerce on the toll road that runs through the city center.

“They (the local government and NLEx Corp.) should sit down, talk, and find a common solution instead of just imposing what they want when it would really affect ordinary citizens,” he said.

Gatchalian and NLEx Corp. executives were supposed to meet on Dec. 9, but the mayor canceled the meeting after an official of the tollway operator, speaking in a radio interview, suggested challenging the local government’s decision in court.

Another meeting between the two sides was set for Monday.

“Let’s understand the ordinary motorists’ plight. We cannot just impose a deadline on this,” the home affairs chief said, suggesting agreement with calls to push back implementation of electronic toll collection to next year while the tollways operators fix the problems with their systems.

Gatchalian on Sunday said he planned to propose solutions that he hoped NLEx Corp. would be able to apply to end congestion on the expressway.

He said he would point out conditions on the turnpike before and during the toll holiday and present motorists’ complaints to NLEx Corp.

“We could have stopped with pointing out the deficiencies with NLEx’s sytem, but we want to be constructive and proactively lay on the table solutions,” Gatchalian said.

The mayor said he also would ask the company to come up with measurable performance indicators that would guide both sides “if and when the suspension is lifted.”

Gatchalian stressed that “the burden is on [NLEx Corp.]” to fix the problems fast “or the toll holiday will persist.”

“The suspension [should be] enough motivation for them to act fast,” he added.

The DOTr has suggested that NLEx Corp. move RFID sticker installation and reloading elsewhere during rush hours to ease congestion on the turnpike.

In a briefing last week, Toll Regulatory Board (TRB) Executive Director Abraham Sales said Transportation Secretary Arthur Tugade had suggested that the stickering and reloading be done at gas stations, shopping malls, grocery stores, and other places frequented by motorists.

Sales said stickering lanes at small toll gates with two to three lanes would be removed and a cash lane maintained there to loosen tie-ups.

He said some toll plazas, including those at Balintawak in Quezon City and Karuhatan in Valenzuela, should be relocated as they were among the causes of congestion on the expressway.

“That is the immediate solution that we are directing the toll operator to implement. They need to relocate these toll plazas,” Sales said.

He said there were also emergency lanes on the expressway that were rarely used and which could be used for cash payments during peak hours to ease congestion on the tollway.

In a statement on Sunday, the DOTr said NLEx Corp. had been instructed to consider increasing the wattage of its RFID sensors from 3 watts to 10 watts within 15 days from Dec. 9.

“Further, the Karuhatan toll plaza configuration in Valenzuela for NLEx should be reassessed and a recommendation be submitted at the soonest possible time,” the DOTr said. —WITH REPORTS FROM KRIXIA SUBINGSUBING AND MEG ADONIS INQ