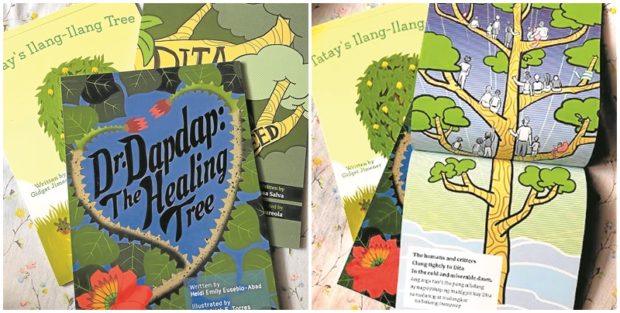 MANILA, Philippines — Standing at the corner of the backyard, “Dr. Dapdap” bloomed with its fiery red-orange flowers, but no children had come to play with it that summer.

Its trunk prickly and flowers odorless, it was not as popular as its neighbors, like the fruit-bearing santol and “lanzones” trees. But at nighttime, when Lolo Nitoy plucked several of its leaves, the blossoming tree at the far end of the yard would soon realize its true purpose.

Dr. Dapdap is one of the endearing characters in a new series of children’s books that were published in a bid to introduce the country’s native trees and promote environmental protection and literacy among young readers.

Written in simple English and Filipino languages, and featuring colorful illustrations, the books are primarily created for children. But even the young once are sure to learn a thing or two about the country’s endemic trees that are often overlooked or were simply forgotten.

The five books are part of the Tata Oskie’s Collection of Children’s Books on Philippine Native Trees, published by the Green Convergence for Safe Food, Healthy Environment and Sustainable Economy, and First Philippine Holdings Corp.

Akin to a modern Lola Basyang, Tata Oskie invites children to discover the love for nature—only that he is Oscar M. Lopez, the chair emeritus and patriarch of the Lopez business group and a known advocate for the environment.

The series features five books whose stories are inspired by the essays submitted by botanists and tree lovers alike about their favorite trees and were published in the three-volume Philippine Native Trees: Up Close and Personal series, also by Green Convergence.

“But in these times, when most people are living in cities, nature is not that accessible. Of course, this pandemic has worsened the situation,” she said.

Therefore, books can become the gateway to bringing children to nature and nature to children, Galang said, with these stories forming part of their foundation in becoming environmentalists at an early age.

The Philippines has 3,600 species of native trees, of which 67 percent are endemic. This represents more than 5 percent of the world’s flora. Despite this, the Plant Resources of Southeast Asia journal noted that the country’s flora is perhaps the least known in the Southeast Asian region.

These new books attempt to fill in the gaps in the knowledge about our very own trees.

Dr. Dapdap is the unlikely hero in Heidi Emily Eusebio-Abad’s “Dr. Dapdap: The Healing Tree,” where the prickly but beautiful “dapdap” tree realizes its medicinal properties.

Another book, “Dita Sows A Good Deed” written by Melissa Salva, draws inspiration from the true-to-life experience of Raymund B. Villanueva of how 36 people, including a baby boy, survived the fatal floods brought by Tropical Storm “Ondoy” (international name: Ketsana) in Quezon City by perching on a “dita” tree.

Other native Philippine trees, such as the “bignay,” “patalsik-pula” and “ilang-ilang,” are the central characters in their own colorful worlds, captured in charming illustrations by different artists.

“It’s important [to have these kinds of books] because we don’t even know we have native trees,” Imelda Sarmiento of Green Convergence, who was part of the books’ editorial team, told the Inquirer. “We grew up knowing only the mahogany, the gmelina, the acacia.”

These foreign species, brought alongside the country’s colonial past, can change existing habitats and affect local wildlife, ultimately altering the landscape and the ecosystems that thrive in them.

Sarmiento, who is also a member of the conservation group Hortica Filipina Foundation, said she herself only began to discover the country’s native trees in her adult life, in the absence of learning materials that focused on them.

Green Convergence, which advocates for the cultivation of native tree species, has previously led tree planting at the University of the Philippines at Diliman, Quezon City, and in College of Holy Spirit in Manila. These pocket gardens now host various species of young native trees from all over the country.

These environmental advocates hope that these books would inspire the next generations of native tree lovers to have their very own stories about their favorite native trees.

“It is important to learn about these trees because they are part of the biodiversity and the ecology of our country,” she added. INQ