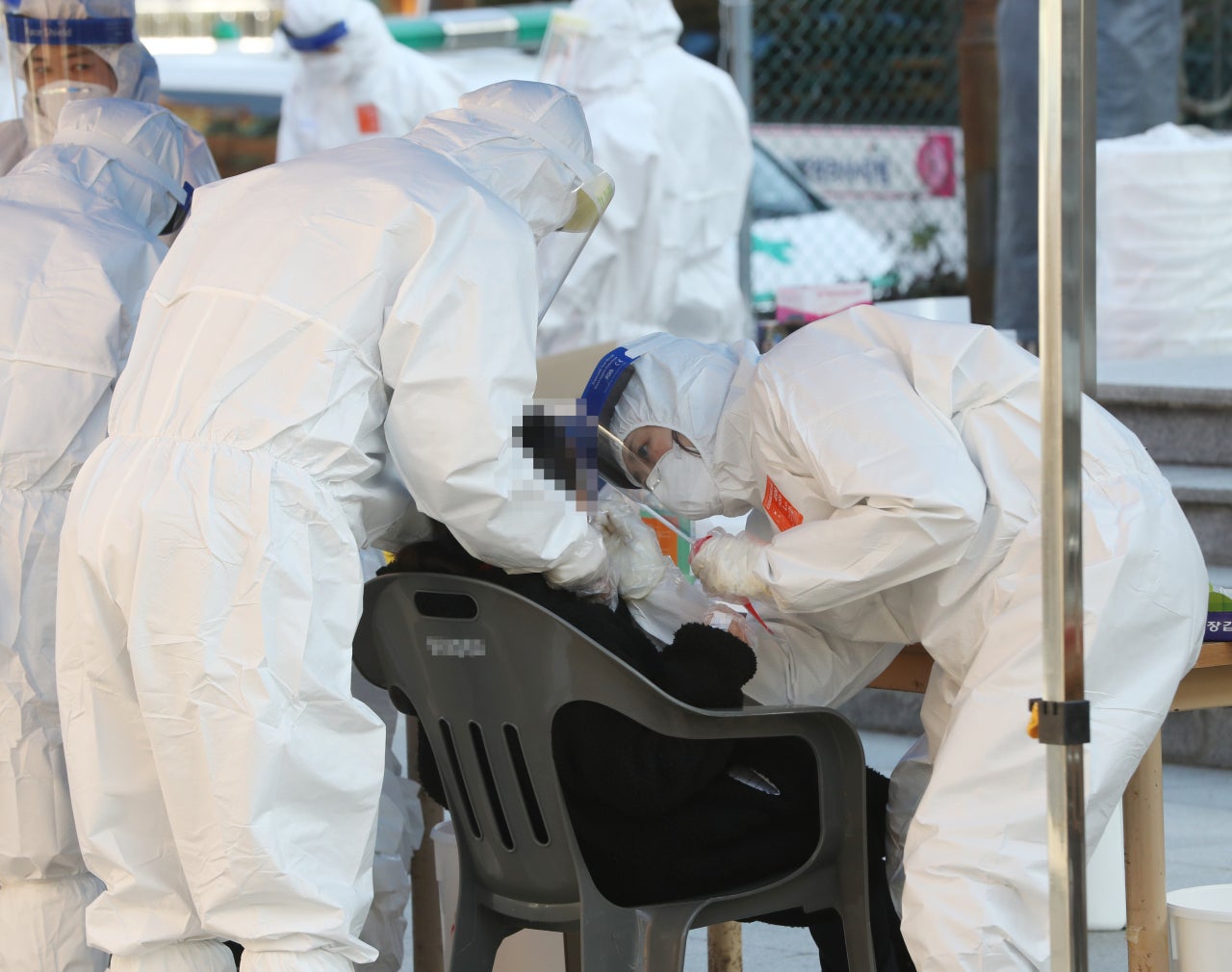 A medical worker collects a specimen from a student at a screening station in Ulsan, 414 kilometers southeast of Seoul, for COVID-19 testing on Saturday. (Yonhap)

SEOUL — South Korea’ daily tally of new COVID-19 cases broke the 1,000 mark on Sunday. It was the highest total since the coronavirus outbreak began here in January, with the government’s antivirus restrictions appearing to have borne little fruit.

Korea added 1,030 coronavirus cases — 1,002 locally transmitted and 28 originating from overseas — in the 24 hours ending Saturday at midnight, according to the Korea Disease Control and Prevention Agency.

Sunday’s case count marked the highest since the country reported its first coronavirus case Jan. 20. The daily number of new cases had stayed within the 400 to 600 range earlier this month but soared to 950 on Saturday. It took one month for the daily total to rise from below 200 to more than 1,000 on Sunday.

Korea managed to bring the virus under control with rigorous contact-tracing and testing efforts during the first wave in February and March, which started with a minor religious sect called the Shincheonji Church of Jesus, and during the second wave in August and September, which was sparked by a Seoul-based church and a massive Aug. 15 rally.

This time, however, the government is struggling to flatten the virus curve because outbreaks are taking place everywhere from restaurants to workplaces and because the cold weather, coupled with increased indoor activities, creates a favorable environment for the virus to stay alive and spread.

The series of antivirus measures that the government has in place have failed to draw the same effect as before, pushing the country’s health system to the brink.

In the past week, the government tightened its social distancing rules to Level 2.5, the second-most-restrictive in the country’s five-tier system, in Greater Seoul and made COVID-19 testing available anonymously for anyone regardless of symptoms.

Starting Monday, temporary COVID-19 testing clinics will begin to operate at 150 locations in the Seoul metropolitan area, including Seoul Station, for the next three weeks. This will allow anyone who wishes to be tested for the virus to take a test anonymously.

In Gyeonggi Province, where a record number of 328 cases were registered, Gov. Lee Jae-myung said in a tweet that he is considering raising the level of social distancing there to Level 3, the highest possible. He also said he plans to mobilize a private university dormitory building as a treatment facility to handle a growing number of coronavirus patients.

Of Sunday’s locally transmitted cases, about 78 percent were in Greater Seoul — 396 in Seoul, 328 in Gyeonggi Province, which surrounds the capital, and 62 in Incheon. Outside the Seoul metropolitan area, 56 cases were posted in Busan, 28 in Daegu and 22 in South Jeolla Province.

The seven-day average number of daily COVID-19 cases was 722.4 for the past week.

Transmission routes for 22.3 percent of the cases were unknown for the past two weeks as of Thursday, according to the KDCA.

Of the 28 imported cases reported for the day, 14 were detected at the border, while the other 14 were identified in individuals under mandatory self-quarantine in Korea. Thirteen cases came from elsewhere in Asia, while six cases were from the United States, five came from Europe, three were from Africa and one was from China.

The number of COVID-19 patients in serious or critical condition here increased to 179, more than double the 76 who were seriously ill as of Nov. 30.

Two more people died from the virus, bringing the death toll to 580, with the overall fatality rate at 1.36 percent.

So far, of the 42,766 people confirmed to have contracted the new coronavirus here, 31,814 have been released from quarantine upon making full recoveries, up 321 from a day earlier. Some 10,372 people are receiving medical treatment while under quarantine.