newsinfo / Headlines
Headlines
MAY BE USED FOR PROSTITUTION, BLACKMAIL

MANILA, Philippines — Think twice before responding to the overtures of an online “sugar daddy,” who offers financial assistance ostensibly in exchange for companionship or romance, the Philippine Commission on Women (PCW) warned.

The PCW noted media reports of netizens signing up on so-called sugar daddy websites or social media accounts as the pandemic took away jobs, crippled businesses and left many desperate for cash.

The commission, an agency under the Office of the President, said it would coordinate with the Inter-Agency Council Against Trafficking on measures that can be taken against unlawful acts being committed using these platforms.

“(E)very woman has freedom to decide and choose for herself what she wants for her career and relationships,’’ the commission said in a statement on Thursday.

“However, her freedom of choice is affected by various factors, such as the presence of individuals and groups that exploit her vulnerabilities,” it added. “This is especially true during postdisaster situations and the COVID-19 pandemic, when many were forced out of work, students need gadgets for online classes, entrepreneurs suffer economic losses, and many are struggling to barely survive.”

“On the surface, it may seem that both parties have the power to dictate terms of the arrangement, but this may not be the real case. Sugar daddies may assert dominance and the sugar babies, in an attempt to earn money, may just succumb to the former’s wishes,” it said.

Worse, “platforms like this can attract or can be used by pedophiles, with potential signups from minors should they be able to fake credentials and join, and this opens opportunities for abuse and exploitation of children,” the commission said. 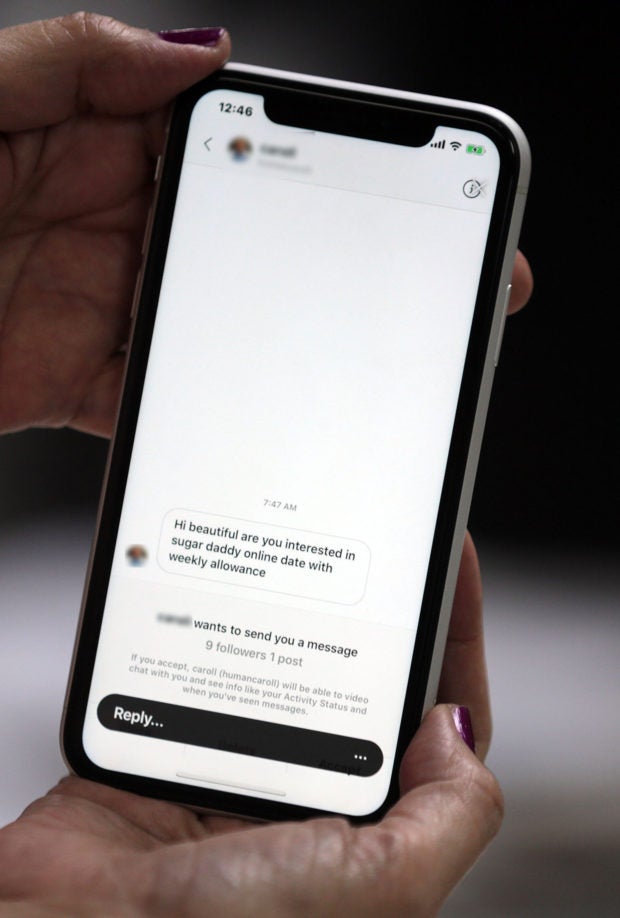 “Katy” believed that she had been targeted by a kind of person that the PCW warned about.

The sender’s profile photo was that of a smiling, middle-aged Caucasian man. In his profile, he described himself as a “businessowner” who believes (quoting Victor Hugo’s “Les Misérables”) that “to love another person is to see the face of God.”

The only other photo posted on the account was that of a beagle roaming around a farm.

She ignored the message, but in the next few days she received similar invitations from two other unfamiliar accounts.

The “businessowner” account, the first sender, was already deleted when Katy checked on Saturday.

The PCW explained that arrangements with sugar daddies could be considered a form of prostitution since money—or “a commercial transaction”—is involved in exchange for romantic relations.

“[Prostitution] is an exploitative system that commodifies, objectifies and dehumanizes women, men and children who are being sold within it,” the agency said.

Read Next
Quarantine also locked down abuse complaints
EDITORS' PICK
Harnessing technology for quality education
Connect to PH’s fastest network with new Signature Plan Lite at only P599 per month
Duterte warns of possible lockdown if ‘more aggressive’ Delta variant spreads
Duterte: When I said I will fight drugs in 6 months, I thought it was like in Davao
Hidilyn Diaz wins weightlifting gold in Tokyo Olympics
Tips for a cheerful life
MOST READ
Hidilyn Diaz wins weightlifting gold in Tokyo Olympics
Go to war with China over West PH Sea? It will be a ‘massacre’, says Duterte
Hidilyn shoots not only for gold but also for permanent place in PH sports history
Duterte acclaims Sotto: ‘He can become a good vice president’
Don't miss out on the latest news and information.