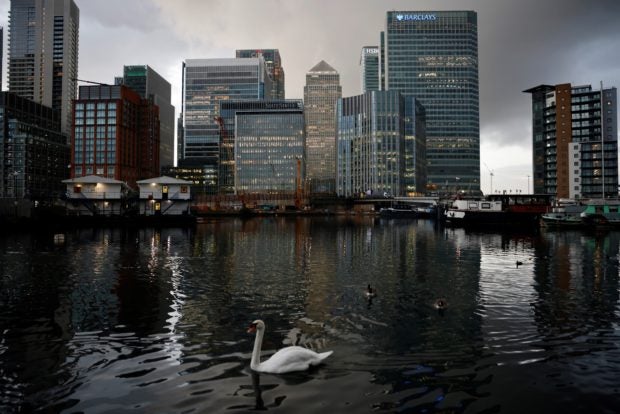 A swan is over-shadowed by tall buildings, including the offices of banking giants, at the secondary central business district of Canary Wharf on the Isle of Dogs, east London on December 11, 2020. – A Brexit trade deal between Britain and the European Union looked to be hanging in the balance on Friday, December 11, 2020, after leaders on both sides of the Channel gave a gloomy assessment of progress in last-gasp talks. The Bank of England said Friday that UK banks remained “resilient” to the risks of Brexit and coronavirus, but warned financial services could face “disruption” when the transition period ends. (Photo by Tolga Akmen / AFP)

London, United Kingdom — A Brexit trade deal between Britain and the European Union looked to be hanging in the balance on Friday after leaders on both sides of the Channel gave a gloomy assessment of progress in last-gasp talks.

Prime Minister Boris Johnson and European Commission chief Ursula von der Leyen have given their negotiators until Sunday before a decision is made on whether to keep talking or give up.

The mood worsened after von der Leyen told EU leaders at a marathon Brussels summit there were “low expectations” and the “probability of a no-deal is higher than of a deal”.

Ireland and Germany tried to raise spirits, agreeing that a pact was “difficult but still possible”.

But Johnson said it was looking “very, very likely” that Britain would end up dealing with its biggest single trading partner on World Trade Organization (WTO) terms from the New Year.

“If there’s a big offer, a big change in what they (the EU) are saying then I must say that I’ve yet to see it,” he told reporters in Blyth, northeast England.

The comments did nothing to inspire confidence in the British pound, which extended its losses on currency markets, dropping more than one percent against the dollar.

“Traders are turning their back on the pound as the language being used now is more serious and fears of a no-deal have increased considerably,” CMC Markets analyst David Madden told AFP.

UK chief negotiator David Frost and his EU counterpart Michel Barnier are trying to carve out a deal by Sunday, with just three weeks left until the end of a transition period following Britain’s departure from the bloc in January.

Whatever happens, Britain will leave the EU single market and customs union, leading to the reintroduction of border checks for the first time in decades.

That has already raised the prospect of heavy traffic clogging roads leading to seaports in southern and southeast England, as bureaucracy lengthens waiting times for imports and exports.

Logjams at the Felixstowe container port in eastern England and elsewhere have already raised fears of more to come, and delays to deliveries to shops, businesses, and industry.

But Johnson’s spokesman said they were mainly caused by a “global spike” in demand for consumer goods and the effect of the coronavirus outbreak on shipping patterns and container capacity.

Brexit trade talks have been deadlocked over the extent of EU access to British fishing grounds and rules governing fair competition.

An EU official refused to rule out a last-minute “turnaround” for a deal, even after the bloc published “no-deal” contingency planning in what was seen as a warning shot to Britain.

Johnson again said fishing and the so-called level playing field were key issues, in particular a “ratchet clause” that would bind Britain to match any future EU legislation.

Von der Leyen told a post-summit news conference the proposed “equivalence” rules would not be compulsory and Britain could act as it sees fit.

“We would simply adapt the conditions for access to our market accordingly,” she added. Johnson’s spokesman said that would still leave Britain tied to decisions made in Brussels.

In the event of no-deal Brexit, the Royal Navy is ready to deploy four-armed patrol ships as a “last resort” to protect Britain’s fishing waters, The Times reported.

Johnson won a snap election a year ago on Saturday with the promise of an “oven-ready” Brexit deal that would break years of political deadlock since Britain voted in 2016 to exit the EU.

But he has been under pressure to make good on his promise, including from working-class towns like Blyth, which were won over to his ruling Conservatives after voting for Brexit.

Johnson’s assessment that Britain would “prosper mightily” on WTO rules with the EU — what he calls “Australia terms” — has not been universally welcomed.

Tariffs and quotas would drive up the cost of business that would be passed on to consumers in the form of higher prices in an economy already reeling from the impact of the coronavirus pandemic.

The country’s former prime minister, Malcolm Turnbull, warned Johnson on Thursday: “Be careful what you wish for.

“Australia’s relationship with the EU is not one from a trade point of view that I think Britain would want, frankly,” he said.