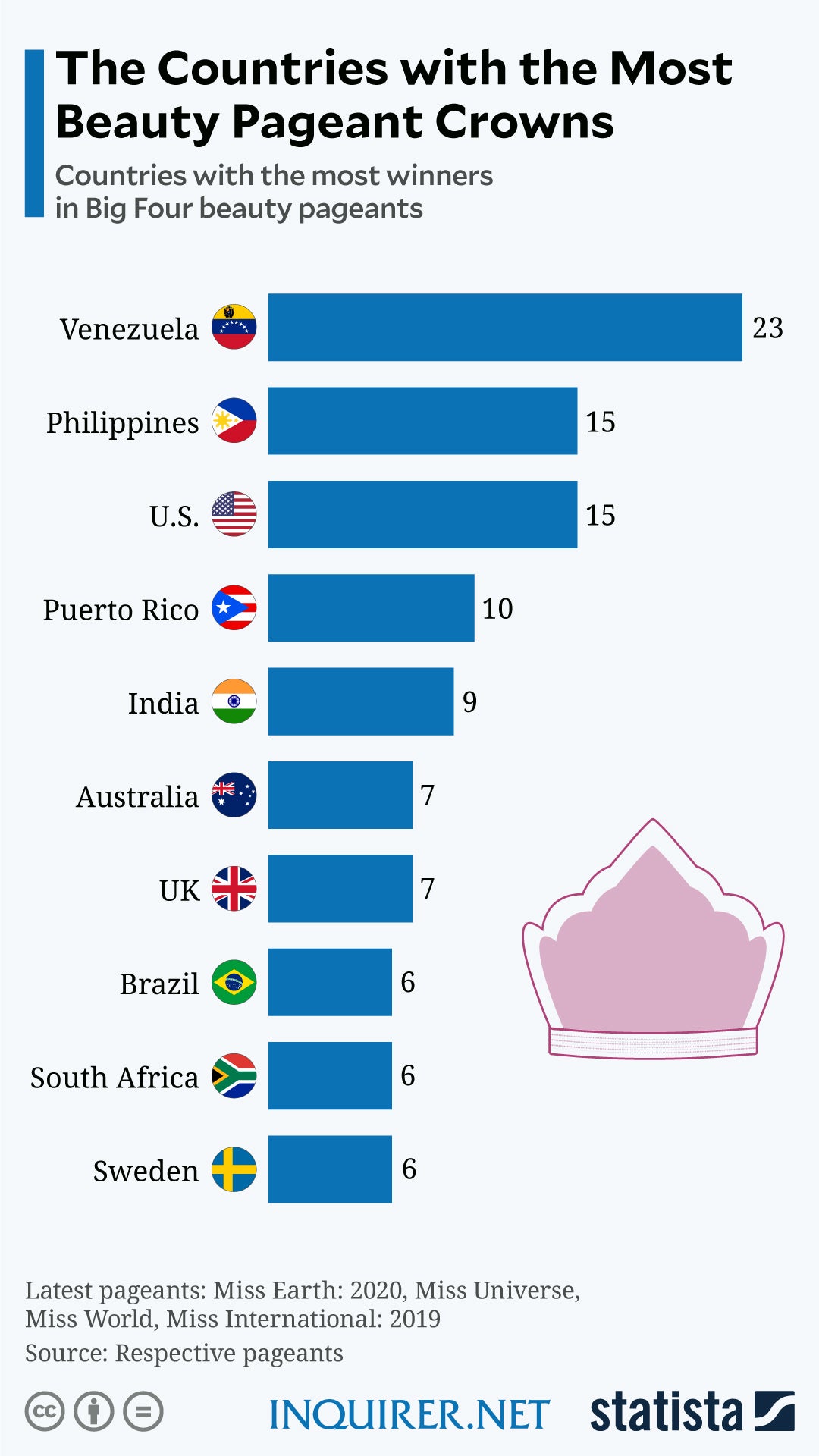 MANILA, Philippines — For years, the Philippines has proved to the world, or the universe rather, why it is known as a beauty pageant powerhouse. In terms of being the country with the most crowned beauty queens, the Philippines finished second on the list, a German market and consumer data company reported.

In a chart shared by Statista, the Philippines trailed behind Venezuela in the list of countries with the most crowns and titles from the Big Four international pageants – Miss Universe, Miss World, Miss International, and Miss Earth.

Venezuela, home of 23 crowned beauty queens, ranked first. The Philippines, along with the United States, meanwhile reigned in second place with a total of 15 crowns each.

Since 1952, four Filipinas have successfully won the crown and title of Miss Universe.

In 1969, Gloria Diaz made history after being the first Filipina to bring home the Miss Universe crown. The then 18-year-old morena beauty charmed the crowd with her graceful presence and witty answers.

Four years after Diaz’s momentous win, the country cinched the title once again when Margarita Moran entered the pageant. During the question and answer portion, Moran impressed the judges with her honest answer.

When asked what she would first buy with a million dollars, Moran responded by saying: “A house and lot because it’s the most expensive thing and I can’t afford it. If I had a million bucks, I’ll buy a house and lot and live by myself and other people of course.”

Pia Wurtzbach meanwhile broke the 42-year drought when she was crowned Miss Universe 2015 after a dramatic mix-up. Initially announced by host Steve Harvey as first runner-up, Wurtzbach was able to show the world and the universe, that she is “confidently beautiful with a heart.”

Three years later, Catriona Gray won the most coveted title. Gray wowed the pageant spectators with her strong stage presence. Donning a flaming red gown by Mak Tumang, she made the audience go gaga over her now-famous “lava walk.”

Megan Young in 2013 won the elusive Miss World title for the country. Young’s coronation also made the country the first to win in five major international beauty pageants.

Meanwhile, since 1960, six Filipinas have been named Miss International. Perhaps the most memorable queen in the list is Melanie Marquez, who became popular because of her quirky Q and A response in 1979: “I like everything about me, I am contented with my long-legged.”

As for Miss Earth, which was established in the Philippines in 2001, four Filipina beauty queens were successfully crowned. Karla Henry reigned in 2008, Jamie Herrell in 2014, Angelia Ong in 2015, and Karen Ibasco held the title in 2017.

“Out of 15 Filipina winners of major contests, only four won a Miss Earth title. The first Big Four winners from the Philippines were in fact chosen much earlier. Gemma Teresa Guerrero Cruz won Miss International in 1964 and Gloria Diaz has crowned Miss Universe in 1969, highlighting the long history of pageant success in the country,” Statista said.

In the data released by Statista, it has noted that since 1952 and 1951, U.S.-based Miss Universe and UK-based Miss World “have favored their homegrown beauty queens to some extent.”

Based on the running tally of Miss Universe winners, the U.S. topped the list with a total of eight crowns. However, despite not having the homecourt advantage, both Venezuela and the Philippines successfully caught up.

“Nations in close association with organizing countries have in the past been more likely to receive the respective title, as the examples of India (six Miss World titles), Jamaica (four Miss World titles), Gibraltar, Bermuda, and Grenada (one Miss World title each) show,” Statista further reported.
“For the U.S.-based Miss Universe contest, Puerto Rico has received the most titles behind the United States and Venezuela,” the company added.

Compared to Miss Universe and Miss World, Miss International which is organized by Japan has only crowned one Japanese beauty queen since its establishment in 1960.

Miss Earth, on the other hand, contributed only four crowns for the country.

Statista remarked that in 2020, the Philippines-based committee gave out the title to the U.S., ” but might have regretted the decision [since it has] caused the country to tie with the Philippines for second-most Big Four titles.”