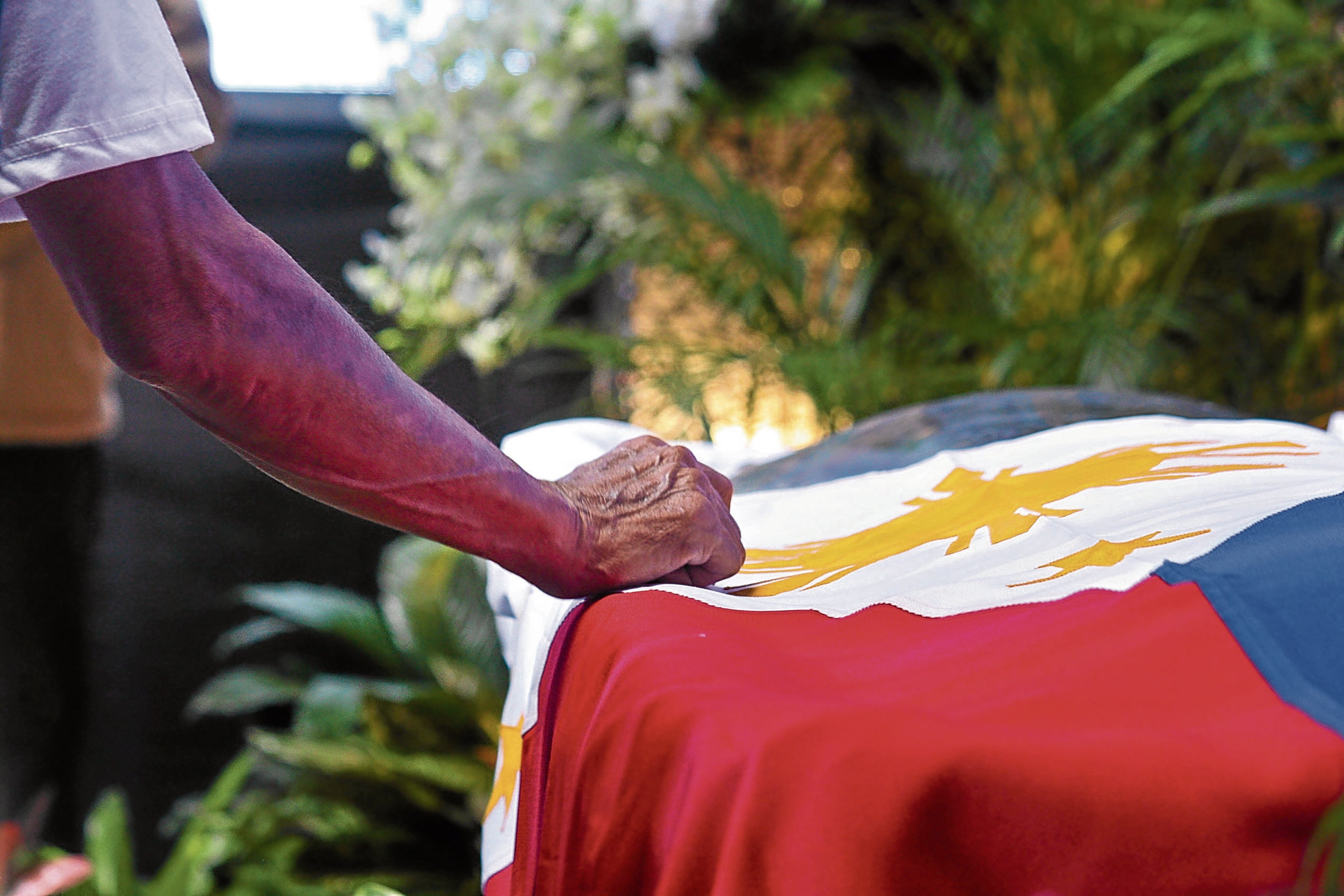 IN MOURNING An elderly relative of Los Baños Mayor Caesar Perez places his hand on the flag-draped coffin of the slain official during the public viewing held at the municipal hall on Tuesday. —PHOTO BY KIMMY BARAOIDAN

LOS BAÑOS, LAGUNA — Mayor Caesar Perez was still being cleared of involvement in the narcotics trade at the time he was gunned down at the municipal hall compound last week, according to the Philippine Drug Enforcement Agency (PDEA).

But in light of his murder, Perez was automatically marked “inactive” just like the thousands of alleged drug users, financiers, and protectors named in the government’s “narcolist” who were arrested or had died, said Jigger Montallana, PDEA director for Calabarzon (Cavite, Laguna, Batangas, Rizal, and Quezon) region.

This did not mean that the mayor was no longer in the roster of so-called “narcopoliticians” exposed by President Rodrigo Duterte in 2017, he said.

The PDEA’s Regional Adjudication Committee was convened on Wednesday “to review, evaluate, and manage persons of interest/narcopoliticians and monitor the interagency database on illegal drugs,” the agency said on Thursday.

It was holding its regular monthly meeting on the day the mayor was killed on Dec. 3, Montallana said in a phone interview. He said it was only this year that the task of adjudicating or reviewing the narcolist, was “downloaded” or devolved to the regional level.

At the start of Duterte’s campaign against drugs, local officials publicly named in the narcolist sought out national agencies, if not the President himself, to have their names stricken off the list. 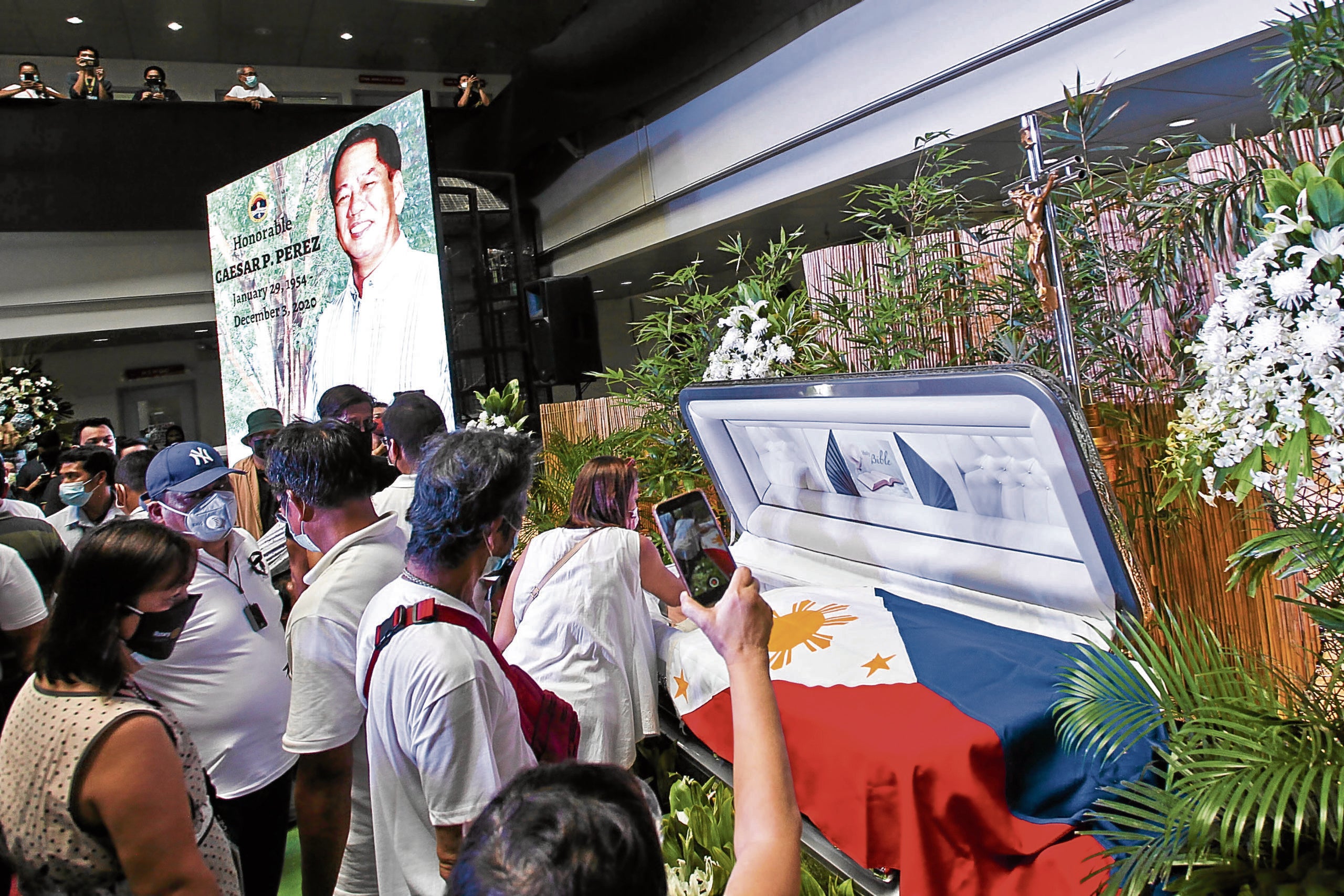 The mayor’s remains arrive at the municipal hall for public viewing after a motorcade around the Laguna town on Tuesday. —PHOTO BY KIMMY BARAOIDAN

“Since it was downloaded, what the regional committee can now do is to submit its recommendation [of names for possible delisting],” Montallana said.

In Perez’s case, he confirmed that the mayor, who ran as an independent in 2019, went to the PDEA-Laguna in October and submitted himself to a drug test. “But a drug test is only one part of the process. A person may test negative to drug use, but [that does not mean he is not] a protector or financier which is a different case,” he said. Montallana said the national narcolist contained more than 6,000 names of government officials and private individuals, about half of them considered “active.” In Calabarzon, around 20 on the list are local politicians, he said.

The PDEA regional official declined to disclose what role exactly in the narcotics trade Perez was being accused of. The mayor’s son, Aldous, believed his father was killed over “politics.”

“I still trust the President and [PNP Director General Debold] Sinas. Where did this list really come from?” Aldous said in an interview on Wednesday.

An upcoming US study, “Deadly Populism: How Local Political Outsiders Drive Duterte’s War on Drugs in the Philippines,” attempts to establish a connection between local politics and Duterte’s populist policy on drugs.

“On our part in the PDEA, I can assure we are being professionals here. It’s not like a person gets tagged in the list because another person just said so. There’s validation and it’s a process, and we make sure it’s not being used to advance personal vendetta,” Montallana said. INQ