Protest held in Germany vs rights abuses in PH 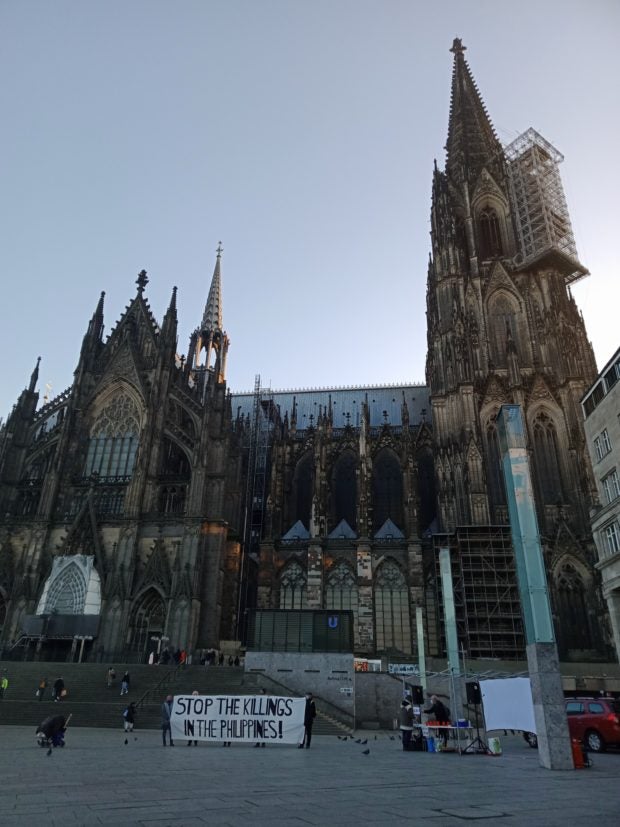 The front yard of the Cologne Cathedral in Germany, the site of protest mounted by members of the civil rights NGO philippinenbüro. Photo courtesy of philippinenbüro

MANILA, Philippines — Civil rights activists and human rights defenders gathered in front of the Cologne Cathedral in Germany on Thursday to remember the victims of human rights violations in the Philippines.

In celebration of Human Rights Day, philippinenbüro, a German-based nongovernment organization, conducted a protest denouncing what they described as “the terrifying human rights situation in the Philippines under the administration of President Rodrigo Duterte.”

The group slammed the extrajudicial killings of political activists, lawyers, journalists, environmentalists, drug users and others who are suspected to be involved in the drug trade.
The protesters also showed their dismay against the recently passed Anti-Terrorism Act of 2020.

Under the anti-terror law, incitement of terrorism “by means of speeches, proclamations, writings, emblems, banners, or other representations” will be criminalized.

Several petitions have been filed by several groups and individuals before the Supreme Court since the law was signed. This makes the law the most contested since the Cybercrime Prevention Act.

“We are very much concerned about what is happening over there,” said Bernhard who was among the protesters.

“Unlike our friends and relatives in the Philippines, we can afford to express ourselves freely, without being afraid of becoming victims of state-incited and state-sponsored repression or worse,” he said, adding that he worked in the Philippines as a development expert for about ten years.

According to the group, some individuals who were present in the protest personally knew Negros-based paralegal and activist Zara Alvarez who was slain in August by unidentified gunmen.
“When I learned of Zara’s murder, my first reaction was denial,” said Kathrin, one of the activists who asked not to reveal her full name.

“I could not accept the terrible truth that this kind and caring woman who had devoted her whole life to working for poor and oppressed people had been mercilessly ambushed and killed. What a cowardly act!”

“After more than four years into the Duterte administration, most participants agree that any new appeal to the Philippine government to immediately halt vast human rights abuses will once again prove futile,” philippinenbüro said in a statement.

“They would rather pin their hopes on more effective responses, like the one launched by the German government and the EU just a few days ago,” the group added.

The group was pertaining to a global rights sanction regime adopted by the EU on Monday.

The framework strictly imposes a travel ban on individuals who are responsible for or involved in serious human rights violations or abuses. Authorities will also freeze any funds of suspected individuals.

The sanctions will apply to those who have committed acts such as genocide, crimes against humanity, and other serious human rights violations or abuses (e.g. torture, slavery, extrajudicial killings).

Aside from the protest conducted by philippinenbüro, members of the Philippine Diaspora in Berlin also held a vigil. An online memorial service was also organized for the Filipinos living in Hamburg.