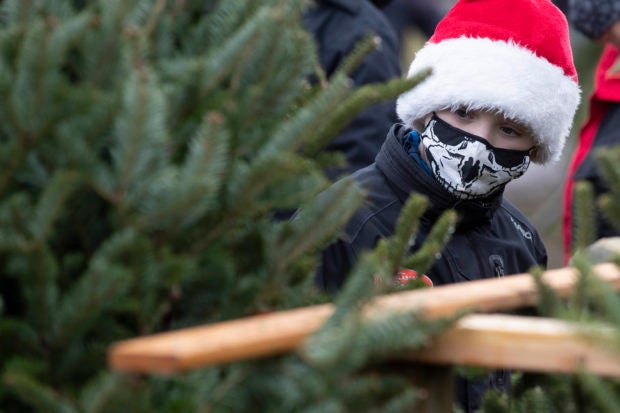 (FILES) In this file photo taken on December 05, 2020 a boy wears a Santa hat and mask while looking for a Christmas tree at a farm in Harrowsmith, Ontario, Canada. – Canada on December 9, 2020 approved the Pfizer-BioNTech Covid-19 vaccine, days after Britain became the first country to greenlight and roll it out. (Photo by Lars Hagberg / AFP)

OTTAWA, Canada – Canada on Wednesday approved the Pfizer-BioNTech COVID-19 vaccine, days after Britain became the first country to greenlight and roll it out.

“At last we have a reason to feel optimistic and excited about returning to the lives we led pre-COVID,” Canadian deputy chief public health officer Howard Njoo told a news conference, adding that Ottawa was “bringing vaccines to Canadians earlier than hoped.”

Prime Minister Justin Trudeau in a tweet called the announcement good news, but warned: “It doesn’t mean we can let our guards down” against the spread of the COVI-19 illness as a second wave forced several regions to reintroduce restrictions.

The government’s chief medical advisor Supriya Sharma said the authorization of the Pfizer-BioNTech shot “marks a critical milestone in our efforts to bring COVID-19 under control.”

She said additional vaccines would become available and be rolled out throughout 2021, with three other vaccine candidates — including one developed by US-based Moderna, which could be delivered later this month — currently being evaluated by health authorities.

These, she said, will provide “every Canadian with the opportunity to be immunized.”

The Pfizer-BioNTech vaccine had undergone a fast-tracked review while it was still in clinical trials, which concluded that it met “stringent safety, efficacy and quality requirements for use in Canada,” said the country’s health department, Health Canada.

The Gulf kingdom of Bahrain has also approved the vaccine.

Marc Berthiaume, director of Health Canada’s bureau of medical science, said its evaluation found “strong evidence that the benefits of the vaccine outweigh the risks.”

The regulator advised, however, that it should be used only in people 16 years of age and up, for now.

Canada had pre-ordered 20 million doses of the Pfizer-BioNTech vaccine when it was still in development, with an option for 56 million additional doses.

Trudeau said on Monday that as many as 249,000 doses would be received in December.

The first shipments to 14 sites across Canada are scheduled to arrive Monday with people receiving shots a day or two later, according to Major-General Dany Fortin, a war-hardened commander put in charge of coordinating distribution.

Health care workers and vulnerable populations including the elderly are to be the first to receive it.

The federal government concluded pre-orders with several other pharmaceutical companies — including AstraZeneca, Sanofi and GSK, Novavax, Johnson & Johnson, Medicago and Moderna — for a total of 400 million doses, to ensure it eventually gets what it needs for its population of 38 million.

By September 2021, Trudeau said, most Canadians should be inoculated.

Thousands of Britons became the first in the Western world to receive the Pfizer-BioNTech vaccine on Tuesday at the start of the biggest global vaccination drive in more than half a century.

The vaccine — which proved to be 95 percent effective in late-stage clinical trials — is administered in two doses, 21 days apart.

Canadian authorities also advised people with allergies to the vaccine ingredients specifically to also hold off as they investigate.

US giant Pfizer and its German partner BioNTech called Canada’s interim order for its emergency use “a historic moment in our collective fight against the COVID-19 pandemic” and “a major step towards returning to normalcy in Canada.”

They will continue providing data on its use for ongoing evaluation, said Health Canada.

Fortin said the distribution of the vaccine — which must be stored in extreme sub-zero temperatures — will be a “mobilization effort of massive proportion.”

He and his team have been doing a “dry run” to test the ultra-cold storage delivery chain, flying boxes from Belgium and handing them off to health care workers.

On Friday, a full dress rehearsal is planned to firm up the responsibilities of each person in the chain.

“Never in modern memory have we seen such an unprecedented level of collaboration or cooperation,” Fortin said.