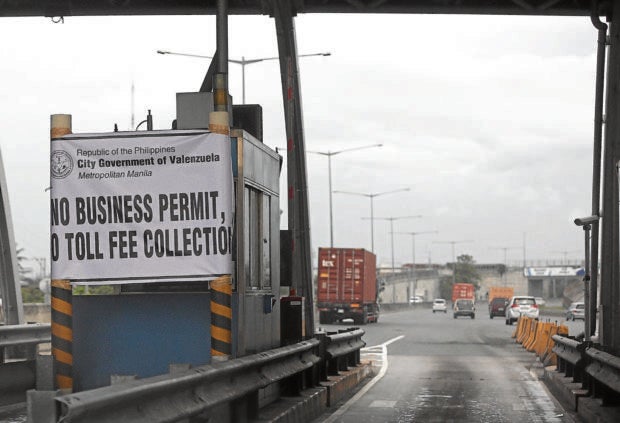 ‘TOLL HOLIDAY’ Motorists drive freely through the Karuhatan toll plaza in Valenzuela City on Wednesday after the local government has suspended the business permit of the toll collector and declared a “toll holiday,” temporarily eliminating congestion on the stretch of the North Luzon Expressway in the city. —NIÑO JESUS ORBETA

MANILA, Philippines – Samar Rep. Edgar Sarmiento, the head of the House of Representatives committee on transportation, warned the Toll Regulatory Board (TRB) on Wednesday that he would ask President Rodrigo Duterte to veto the agency’s 2021 budget if it would not fix the problems with the implementation of electronic toll collection that had been causing monstrous vehicular congestion on the expressways.

“We can still do something about the budget of [the] DOTr (Department of Transportation). That is the last call,” Sarmiento told reporters.

The TRB, which regulates toll road operation, is an agency overseen by the DOTr.

“That is our last card,” Sarmiento said, threatening to defund the TRB, which has been accused of neglect that had led to daily tie-ups on the toll roads following the Dec. 1 shift to electronic toll collection.

“I will do that if needed. I will appeal,” Sarmiento said.

He reiterated his call for the shift to be pushed back to next year.

“Push it back because the people will suffer. The system is not ready. Let us not insist on it,” he said.

Sarmiento said that of the 6.1 million motor vehicles in Metro Manila, Central Luzon and Calabarzon, only 3 million had been fitted with radio frequency identification (RFID) tags needed for electronic toll collection.

He said his committee had never failed to remind the TRB to fix the problems related to the shift before implementation, but the board did not listen.

The TRB, he said, “can always revoke” the concession agreements with the tollway operators if they could not serve the public well.

“It is in the concession agreement, the government can take over,” he said.

On Monday, the local government of Valenzuela City suspended the business permit of NLEx Corp., the toll operator for the Northern Luzon Expressway, after the company failed to clear the tollway of kilometerslong tailbacks caused by malfunctioning sensors.

Sen. Sherwin Gatchalian, chair of the Senate economic affairs committee, is seeking a review of the TRB’s powers and functions and of the contracts of the tollway operators. He has also demanded the resignation of TRB Executive Director Abraham Sales.

TRB spokesperson Julius Corpuz on Monday said the board was dealing with the problems caused by the modernization of toll collection, but this was unknown to the lawmakers.

On Tuesday, the board ordered the tollway operators to take measures to prevent congestion on the expressways. In a statement, it said it would penalize the operators or suspend their authority to collect if they continued to violate the implementation rules of electronic toll collection.

The TRB also said it had ordered the tollway operators to replace worn-out and defective sensors, RFID tags and equipment, and relocate RFID installation and reloading lanes to prevent congestion on the turnpikes.

It said it also required them to upgrade their systems software and improve customer service assistance and traffic management.

The TRB, however, did not set a deadline for operator compliance. But Corpuz said the tollway operators were told to solve the problems “immediately.”

“We have to [consider that] one deadline [could not be set] for all the requirements. We would have to look into it, with the concessionaires and toll operators, an opportunity to explain themselves. But … what we require is to arrive at applicable and practicable solutions to these issues,” Corpuz said.

He also said the TRB would attend the hearing the Senate would call and that Senator Gatchalian could “expect our full cooperation.”

But the TRB distanced itself from a potential legal brawl between NLEx Corp. and the Valenzuela city government.

“[T]his is a matter between the City of Valenzuela and the NLEx operator. We have been assured that this is being given the appropriate attention and hoped to be resolved very soon,” the board said in its statement.

After the local government suspended the business permit of NLEx Corp. on Monday, it declared a “toll holiday” for motorists passing through the toll plazas in the city, enabling vehicles to breeze through the toll booths and clearing the turnpike of congestion.

Valenzuela Mayor Rex Gatchalian, a brother of Senator Gatchalian, was supposed to meet with officials of Metro Pacific Tollways, parent company of NLEx Corp., on Wednesday, but he postponed the meeting.

“We will welcome them filing a case in court. We know we stand on strong legal ground so we are ready to defend our actions,” Gatchalian said in a post on Twitter, responding to Metro Pacific Tollways senior vice president Romulo Quimbo’s statement in a radio interview that the company did not want the controversy to reach the courts.