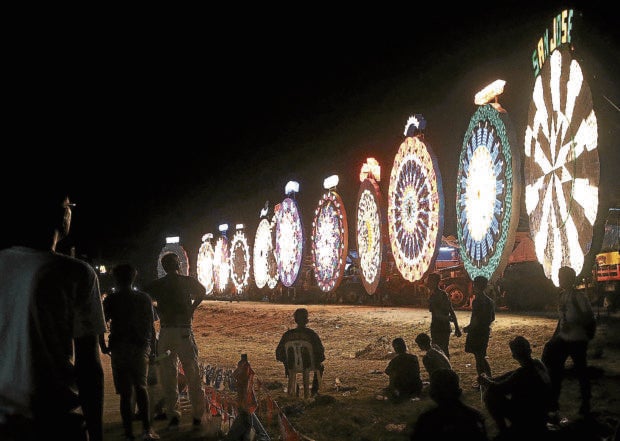 SHINING BRIGHT Spectators get a front-rowview of the display of colors and patterns by Pampanga’s giant “parul” (Christmas lanterns) during the Ligligan Parul (Giant Lantern Festival) in the City of San Fernando last year. —RICHARD A. REYES

CITY OF SAN FERNANDO, Pampanga, Philippines — The coronavirus pandemic has forced craftsmen, local officials and civic leaders in this Pampanga provincial capital to cancel the competition in this year’s giant lantern festival.

Instead, they have opted to “perform” the mammoth creations to an online audience on Dec. 16 to continue the tradition that began 112 years ago.

“We won’t allow the absence of lanterns,” Ernesto Quiwa, great grandson of the pioneer, Francisco Estanislao, said to explain the adjustments for the annual event, which used to gather 50,000 spectators from here and abroad.

A Mass at 6 p.m. will precede the exhibition at Robinsons Starmills here and will be aired live on social media and local television stations.

“The lantern festival is our way of thanksgiving for surviving the hardships during this pandemic. It is our way also of spreading the messages of hope and trusting in God,” Mayor Edwin Santiago said.

The participating villages went down to seven this year from 12 in 2019, according to Ching Pangilinan, city tourism officer. Only Sto. Niño, San Juan, San Nicolas, Sta. Lucia, Bulaon, Telasbatagan and Calulut will perform their giant lanterns by mostly reusing pieces they used in the 2019 tilt.

Quiwa said several participating villages had almost run out of budget, having spent more funds in controlling the spread of the virus and helping those affected by the pandemic.

Giant Lantern Festival Inc., Robinsons Starmills and other companies pooled funds to give a subsidy of P150,000 to cover the expenses of transporting and repairing the lanterns. Villagers also donated money and food.

Bondoc got the judges’ nod last year when the “tambor” (center of the lantern) showed the greatest story in humankind, the birth of Jesus more than 2,000 years ago in a humble manger.

“We do not intend to create crowds. The audience has to watch from the safety of their homes,” Santiago said.

Quiwa, 74, said he was happy at the grit of “magpaparul” (lantern makers).

“In normal times and in disasters, we spread joy. Six months after Mt. Pinatubo erupted [on June 15, 1991], all lanterns competed in the festival. We always find ways to make the lanterns alive during Christmas,” he said.

In 1908, Estanislao, a salt vendor, made a 2.43-meter (8-foot) bamboo lantern in honor of Sta. Lucia, his village’s patron, for the nine-day Christmas dawn Masses and processions, demonstrating the religious underpinning of the tradition.

Pampanga’s giant lanterns are one-of-their-kind in the world. Measuring 6.09 m (20 ft) in diameter and fitted with 15,000 light bulbs, the lanterns appear like dancing in three rounds.

Several rotor or aluminum barrels that connect the bulbs and wires to the source of electricity through hairpins or bicycle rods enable craftsmen to let out numerous patterns of colors and designs that turn on-and-off in sync with a medley of songs.