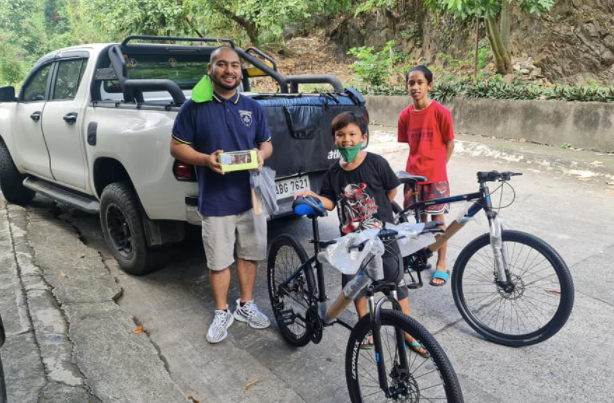 Two working students from Rizal, with a simple wish of buying a bike to use for commuting to work, got their wish granted by some generous netizens, and they needn’t touch their savings anymore.

Cousins Dexter and Onyok, aged 16 and 10 years old, both work part-time at a construction site. They have already saved P1,000 and were just looking for a bike that’s worth the amount they have, according to their post on Padyakers Market Facebook page, cited by one Manjit Reandi on his own post on Dec. 5

The cousins will be using the bike to travel from home to their workplace in Pasig City.

Reandi, after learning about their predicament, immediately asked the help of his own cousin Andrew Generao to buy two bikes for the kids.

“I was amazed. At an early age, napakasipag nila (they are so hardworking) and both of them are studying,” Reandi stated. “I like the way [Dexter] posted. Hindi siya humihingi (He is not asking for a handout), he wanted to buy a bike from his savings.”

Reandi also learned that Dexter, whose father is a construction worker too, also does part-time dishwashing job in a bakery. The bakery is owned by a family that is also helping out Dexter and Onyok.

The bikes have been handed to Dexter and Onyok. Taking note of their reaction upon receiving their bikes, Reandi shared, “Speechless din sila which [is] nakakatuwa kasi even the owner of the bakery was crying when they saw the [two] new bikes for this kids.”

(They were also speechless because even the owner of the bakery was crying when they saw the two new bikes for the kids.)

Private citizens in the country have been doing initiatives to help commuters severely affected by the limited options in public transportation under the pandemic and its lockdowns. For example, host Gretchen Ho has been leading a bike donation campaign through her “Woman In Action” initiative, in cooperation with fellow celebrities such as Angel Locsin and Karen Davila. JB

Angel Locsin, Gretchen Ho give away bikes to displaced stuntmen