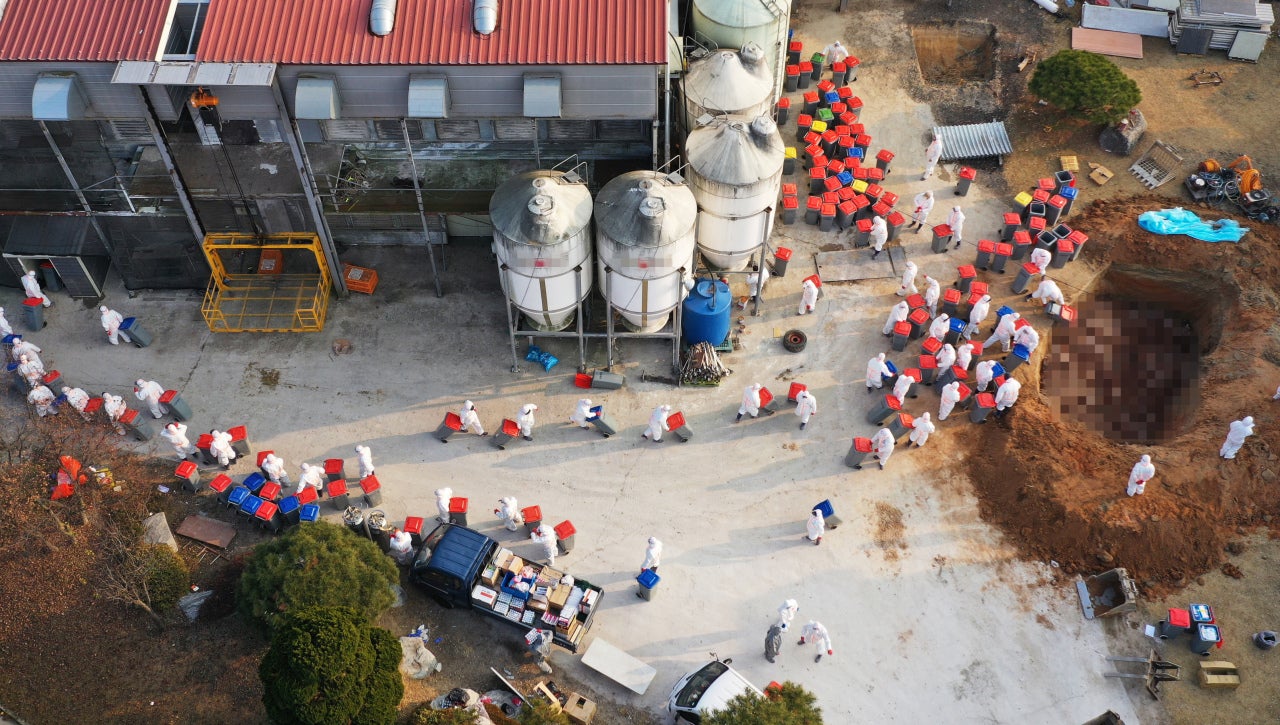 The Ministry of Agriculture, Food and Rural Affairs said Tuesday that a H5N8 strain of highly pathogenic bird flu was found at a chicken egg farm in Yeoju, Gyeonggi Province, late Monday.

Officials began culling 193,000 chickens at the farm and 7,000 ducks at a nearby farm as a preventative measure.

Gyeonggi Province imposed a standstill order for all poultry farms in the region, prohibiting movement of all birds, related people and vehicles through early Wednesday.

On the same day, Korea also located another bird flu case at a quail farm in Eumseong, North Chungcheong Province, where 726,000 quails are located.

The strain of the virus has not been verified, but if confirmed as highly pathogenic, about 1 million quails and ducks would have to be culled immediately.

Another possible highly pathogenic case was reported Tuesday at a duck farm in Naju, South Jeolla Province. Close to 10,000 ducks at the farm were ordered to be culled as a precautionary measure while awaiting analysis results.

Continued discovery of the highly pathogenic bird flu among domestic poultry has put authorities on alert, as previous nightmares from the virus are slowly resurging to haunt the local poultry industry and consumers.

The last outbreak, which spanned from November 2017 to February 2018, resulted in 6.54 million chickens, ducks and quails being culled.

The mass culling and public fears then seriously disrupted demand for and supplies of poultry products like chicken and eggs during the outbreak. Korea had to import eggs from nearby countries to meet demand for “safer” eggs and to stabilize egg prices.

The deadliest outbreak, which spanned between 2016 and 2017, had more than 38 million chickens, ducks and quails culled, and the government spent 336.4 billion won ($310.2 million) to support poultry farms.

Intertwined with the ongoing bird migration season, officials fear a recurring nightmare that could serve as another major setback to the local poultry farming sector.

“The danger of highly pathogenic avian influenza at poultry farms will grow with more migrant birds flying in until the coming January,” said Park Byung-hong, head of the food industry policy office at the Agriculture Ministry in a press briefing Tuesday.

“Migrant bird territories and wild bird habitats are spread out all across the country, so it is a highly serious situation where chances are high for poultry farms across the whole country to be infected with AI.”

As of Tuesday afternoon, Korea has confirmed four highly pathogenic bird flu cases from poultry farms this year since reporting the first case at a duck farm in Jeongeup, North Jeolla Province, on Nov. 28. It was the first outbreak of the virulent strain among farmed poultry in 32 months.

While bird flu cases have been discovered in Korea since then, all the cases were found to involve less severe strains. The first highly pathogenic case in wild birds this year was reported Oct. 25 in Cheonan, South Chungcheong Province.

South Korea has been responding with its alert for bird flu raised to the highest level since finding the first domestic case at a duck farm in Jeongeup.

The Interior Ministry announced last week that it would spend 6.2 billion won in disaster safety funds to quickly respond to the bird flu situation while setting up a special response team with local government officials.

The government is also planning to devote 60 billion won from next year’s budget to compensate poultry farmers affected by the outbreak.

Municipal and provincial governments can order additional measures as needed to curb the virus spread.

The Agriculture Ministry said in a briefing Tuesday that the government will strongly respond to any violations to virus control measures from poultry farms.

“Our analysis results showed that (many poultry farms) are not abiding with even the most basic disinfection and biosecurity protocols even though the virus is already apparent nearby,” Park from the ministry said.

“We urge farm owners to thoroughly execute virus control measures to protect their farms from the virus.”

The country has also banned imports of poultry products, live poultry and eggs from countries that have reported highly pathogenic bird flu cases, including France, Sweden, Belgium and Denmark.

Despite such culling efforts and a ban on imports, the Agriculture Ministry said the local poultry supply is stable, with much stacked up and ready to meet market demand as needed.

As of September, Korea was producing 46.4 million eggs per day, up 7.3 percent from the same month a year earlier. Local farmers were raising 8 percent more chickens for meat at 88.2 million and 7.3 percent more hens for eggs at 73.9 million.

The number of farmed ducks fell 2.4 percent to 9.3 million, but the ministry said demand for duck meat has accordingly fallen from the COVID-19 pandemic.

“The ministry will thoroughly respond to prevent any supply issues in cooperation with producers and retailers,” Park added.