The Valenzuela city government suspends the business permit of the North Luzon Expressway toll operator after the company fails to solve the problems with its electronic payment system and ease congestion on the turnpike.
By: Christia Marie Ramos, Krissy Aguilar, Miguel R. Camus - @inquirerdotnet
INQUIRER.net, Philippine Daily Inquirer / 05:00 AM December 08, 2020 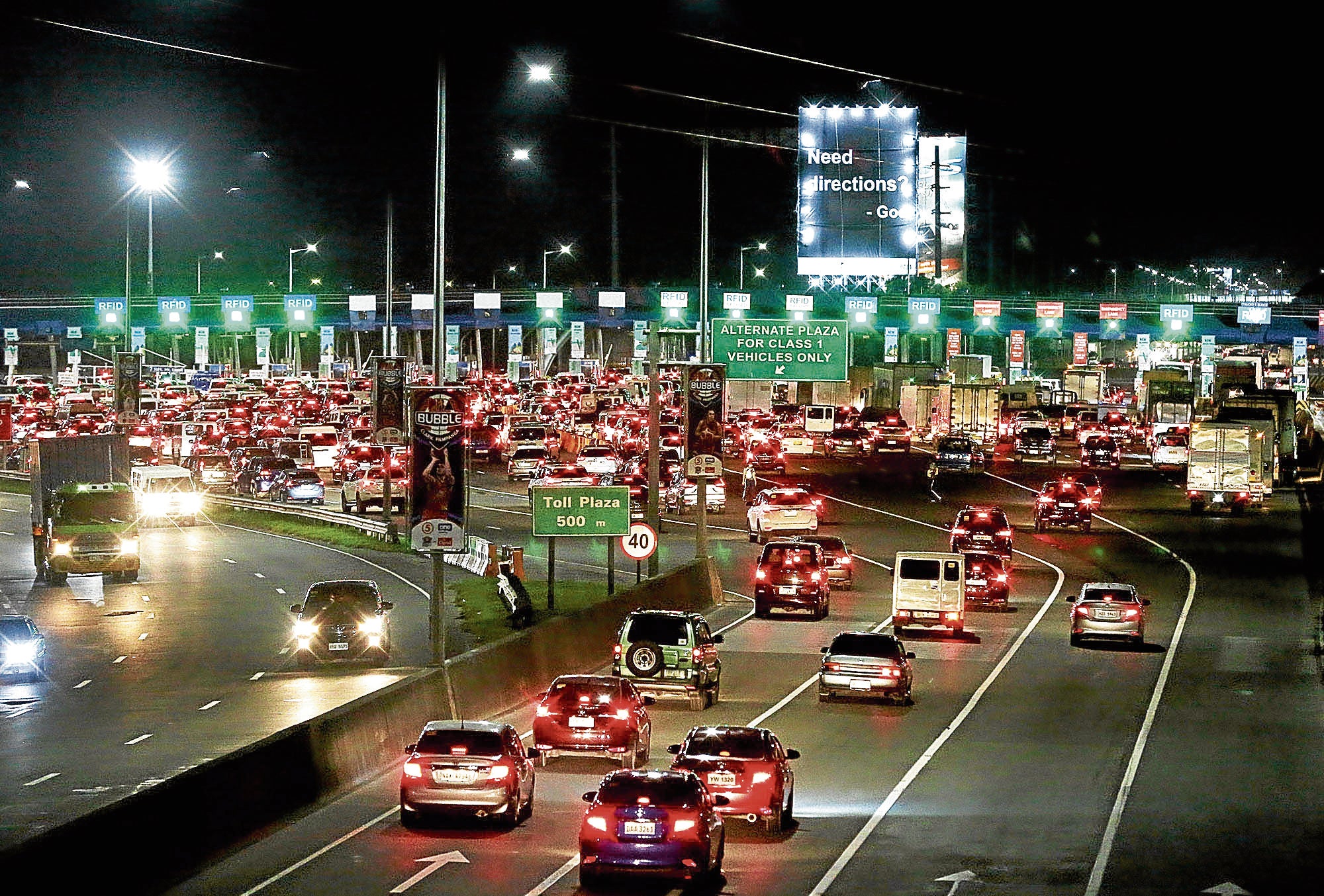 MANILA, Philippines — Sen. Sherwin Gatchalian demanded on Monday the resignation of the head of the Toll Regulatory Board (TRB) over the monstrous vehicular congestion on turnpikes caused by the faulty implementation of an electronic toll collection system.

“If you ask me, the TRB is really not functioning. Whoever is the head of that agency should resign and his post should be given to someone who knows the job,” Gatchalian, who is seeking a Senate inquiry into the chaos caused by the introduction of radio frequency identification (RFID) to eliminate cash payments at toll plazas, said in a radio interview.

The TRB is the agency that regulates the country’s tollways. It is overseen by the Department of Transportation (DOTr) and is headed by an executive director, currently Abraham P. Sales.

Sales had not commented on Gatchalian’s call for his head as of press time on Monday.

The preparation for the shift to cashless toll payment was marred by the painfully slow distribution of RFID stickers at toll plazas in recent days, causing kilometers-long tailbacks that disrupted economic activity in municipalities along the turnpikes, particularly at Gatchalian’s political base, Valenzuela City, where the North Luzon Expressway (NLEx) interchange is located.

The full shift began on Dec. 1, but malfunctioning sensors at the toll plazas caused gridlock on the tollways, and the daily chaos at the interchange in Valenzuela drew demands from Gatchalian’s brothers, Mayor Rex Gatchalian and Rep. Wes Gatchalian, for a stop to the modernization until the technical problems could be solved.

Slow action by the toll operator forced Mayor Gatchalian to suspend the company’s business permit on Monday. Without toll collection, vehicles breezed through the toll plaza, easing congestion at the interchange.

“This problem did not happen overnight,” Senator Gatchalian said. “It reached this point because it had been neglected. For me, the TRB has a big responsibility for this mess.”

Gatchalian earlier warned the tollway operators that they would lose their contracts with the government unless they fixed the problem with the modernization of toll collection.

He called for a review of the agreements with the government of the operators of NLEx and the South Luzon Expressway (SLEx) for violations involving the shift to electronic toll collection.

“The TRB can cancel the contract if public interest is compromised. Operating expressways is a privilege granted to operators. They are granted [privilege] to serve the public,” Gatchalian said.

“If the operators cannot provide good service and the public suffers, the people have the power to take back the contracts,” he added.

In the meantime, he said, echoing Mayor Gatchalian’s suggestion, the operators should consider a “toll holiday” while they are solving the problems with the new toll collection system.

“We are aware that their system is rotten and does not work, so let the people go through without paying toll,” Gatchalian said.

In a separate radio interview, TRB spokesperson Julius Corpuz said the board was dealing with the problems caused by the modernization of toll collection.

“We understand the complaints of Senator Gatchalian, Mayor Gatchalian and Representative Gatchalian, but they are unaware that we are trying to solve the problems of motorists resulting from the implementation of RFID,” Corpuz said.

Corpuz urged careful study of Senator Gatchalian’s warning about the revocation of the tollway operators’ contracts. “Let us see if there is a need to go that far or just solve these problems quickly so traffic on the expressways could be improved,” he said.

Asked to comment on Mayor Gatchalian’s call for a toll holiday, Corpuz said it was an option. He, however, said there were other ways to ease congestion on the toll roads.

“Our observation this past week is that there’s an improvement. But we won’t stop because we know that there are a lot of complaints,” he said.

The NLEx operator had asked for more time to fix the problems with its RFID system, but Mayor Gatchalian rejected its appeal on Monday.

“I have been calling the attention of your higher-ups regarding the technical glitches and inefficiency of your then Easytrip (and later RFID) for the past seven years. You therefore had more than enough and reasonable time to make your system stable and reliable,” he said in a letter to NLEx Corp. general manager Luigi Bautista.

“The monstrous traffic jam caused by the technical glitches in your RFID system is already taking its toll on the economic, mental and general well-being of our citizens. The suffering has to stop. The public deserves better,” Gatchalian said.

The mayor demanded that the company take full responsibility for its shortcomings and mistakes and apologize to the public.

He gave the operator up to 5:01 p.m. on Monday to comply with his demands or he would issue a cease-and-desist order to stop the company’s operation in Valenzuela.

“This saga is not just about Valenzuela City anymore, but for the traveling public as well. The city government is acting on behalf of the general welfare and safety of the public on this concern,” Gatchalian said.

NLEx Corp. apologized to the public and the Valenzuela government and promised to comply with Gatchalian’s demand that it quickly solve the problems with its RFID system.

“We are sorting out the issues one by one and we have to accelerate the resolution,” Quimbo said.

But as the congestion did not ease, Gatchalian suspended NLEx Corp.’s business permit. Motorists were allowed to pass through the toll plazas within Valenzuela, but the operator was not allowed to collect toll.

“Heavy traffic will more or less be alleviated. It may not be the cure to all but we addressed one of the major traffic issues,” Gatchalian told reporters after serving the suspension order on NLEx Corp.

Also on Monday, Speaker Lord Allan Velasco appealed to the DOTr to consider extending the deadline for vehicles to get RFID stickers to the first quarter of next year.

“At the rate things are going, I don’t think all 6.1 million registered vehicles in Metro Manila, Central Luzon and Calabarzon will be provided with RFID stickers by Jan. 11, 2021,” Velasco said in a statement.

“It would be more practicable if the deadline is further extended to March 31, 2021, to give all our motorists enough time to secure the stickers, [as] we are still in a pandemic where movement of people is limited,” Velasco said.

—With reports from Meg Adonis and Julie M. Aurelio