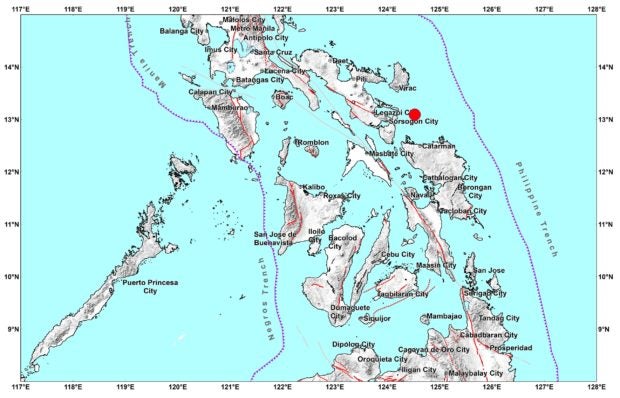 The quake centered 37 kilometers northeast of Prieto Diaz town in Sorsogon province, according to the Philippine Institute of Volcanology and Seismology (Phivolcs).

There were no immediate reports of damage or injury from the tremor that struck at 10:37 p.m. at a depth of 77 kilometers.

Phivolcs initially placed its magnitude at 6.4.

“The earthquake magnitude was updated to magnitude 5.4,” Phivolcs director Renato Solidum said in a text message to INQUIRER.net on Tuesday.

“The initial magnitude contained in the Earthquake Information number 1 was an automatic determination, and this was updated after analysis of more data that came in and released as Earthquake Info number 2 where the final magnitude is 5.4,” Solidum explained.

The earthquake was felt in the following areas:

Instrumental intensities were also recorded in the following areas: