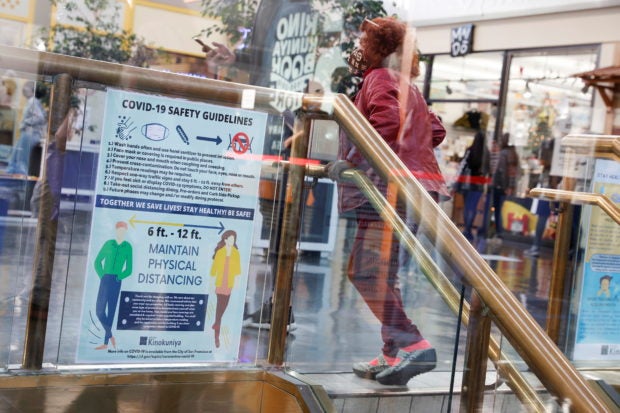 A masked customer ascends a flight of stairs inside Japan Center in Japantown ahead of the new stay-at-home order in attempts to contain the spread of the coronavirus disease (COVID-19) in San Francisco, California, U.S., December 6, 2020. REUTERS/Stephen Lam

LOS ANGELES — More than 23 million people in Southern California were preparing on Sunday for the harshest lockdowns in the United States as COVID-19 cases spiked to record levels in the country’s most populous state.

The restrictions in California, ordered by Governor Gavin Newsom to take effect on a region-by-region basis as hospital intensive care unit beds are filled almost to capacity, call for bars, hair and nail salons, and tattoo shops to close again.

As of 11:59 p.m. on Sunday, the affected regions were also required to shut down even outdoor restaurant dining.

Newsom, a first-term Democrat, has threatened to withhold funds from local governments that refuse to carry out the restrictions.

The clampdown has angered some Californians eight months into the pandemic, including some law enforcement officials. The sheriffs of Los Angeles, Orange, and Riverside counties have said they won’t help impose them.

Riverside County Sheriff Chad Bianco said in a videotaped message posted on the department’s website that his office “will not be blackmailed, bullied or used as muscle” against county residents to enforce the governor’s orders.

“Orange County Sheriff’s deputies will not be dispatched to, or respond to, calls for service to enforce compliance with face coverings, social gatherings or stay at home orders,” his counterpart in Orange County, Don Barnes, said in a written statement.

The San Francisco Bay Area will also go into lockdown starting at 10 p.m. on Sunday, under a separate set of orders issued by Mayor London Breed.

Newsom and Breed have both been sharply criticized after dining on separate nights at a posh Napa Valley restaurant, The French Laundry, in November despite repeatedly admonishing Californians to avoid such outings. 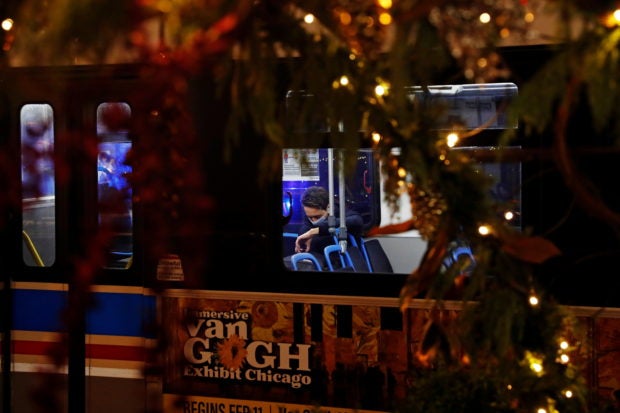 A man wearing a protective face mask, as the global outbreak of the coronavirus disease (COVID-19) continues, sits aboard a CTA bus in Chicago, Illinois, U.S., December 6, 2020. REUTERS/Shannon Stapleton

As the nation struggles under the latest surge in the pandemic, Dr. Deborah Birx, the White House’s coronavirus response coordinator, complained on Sunday of mixed messages coming from U.S. governors.

“Right now, across the Sun Belt, we have governors and mayors who have cases equivalent to what they had in the summertime yet aren’t putting in the same policies and mitigations that they put in the summer, that they know changed the course of this pandemic across the South,” she said in an interview on NBC’s “Meet the Press” show.

President-elect Joe Biden, a Democrat who defeated Donald Trump in the Nov. 3 election, has said that on taking office on Jan. 20 he will enact mask mandates where he has authority, such as at federal buildings and for interstate travel.

Trump said on Twitter that former New York City Mayor Rudy Giuliani, his personal lawyer, had tested positive for the virus. Trump did not say if Giuliani was experiencing symptoms or had quarantined.

In New York City, one of the early epicenters of the U.S. pandemic, some public schools in the nation’s largest school district prepared to reopen for daily in-person classes on Monday after a citywide shutdown.

An estimated 190,000 children in programs geared for early childhood, elementary and special needs students will be eligible to return to classrooms, the city said.