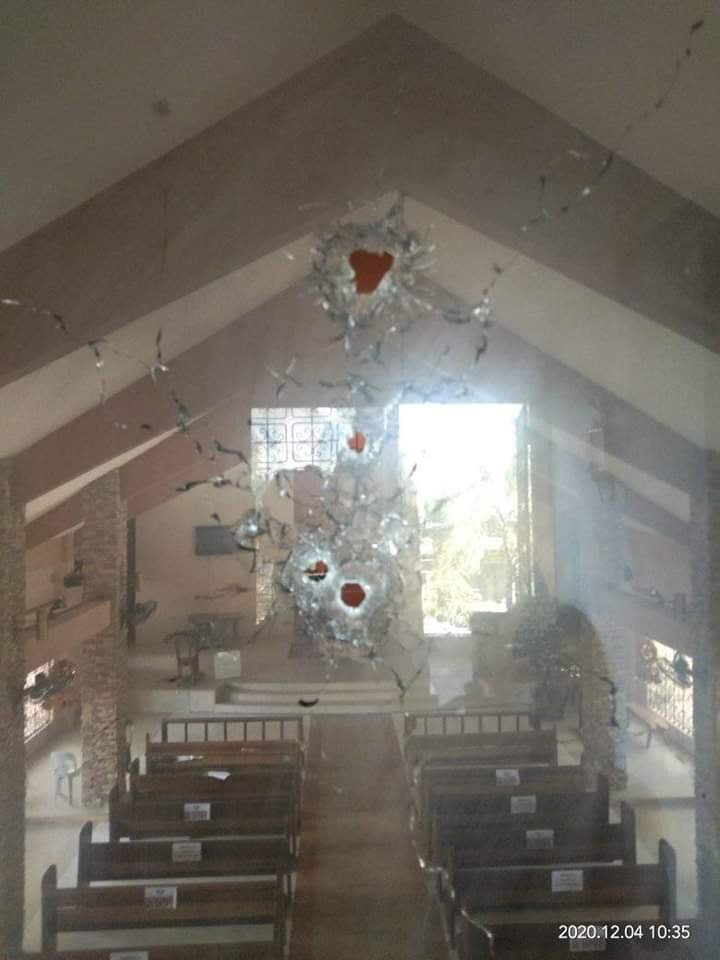 The glass window of the choir’s chamber at the church bore bullet holes, too. PHOTO FROM FR. DENZ BASADA, OMI

COTABATO CITY—The chief of police of Datu Piang town, Maguindanao province has been relieved of his duties following a raid by Islamic State-linked Moro gunmen on the town’s military and police outposts last week. 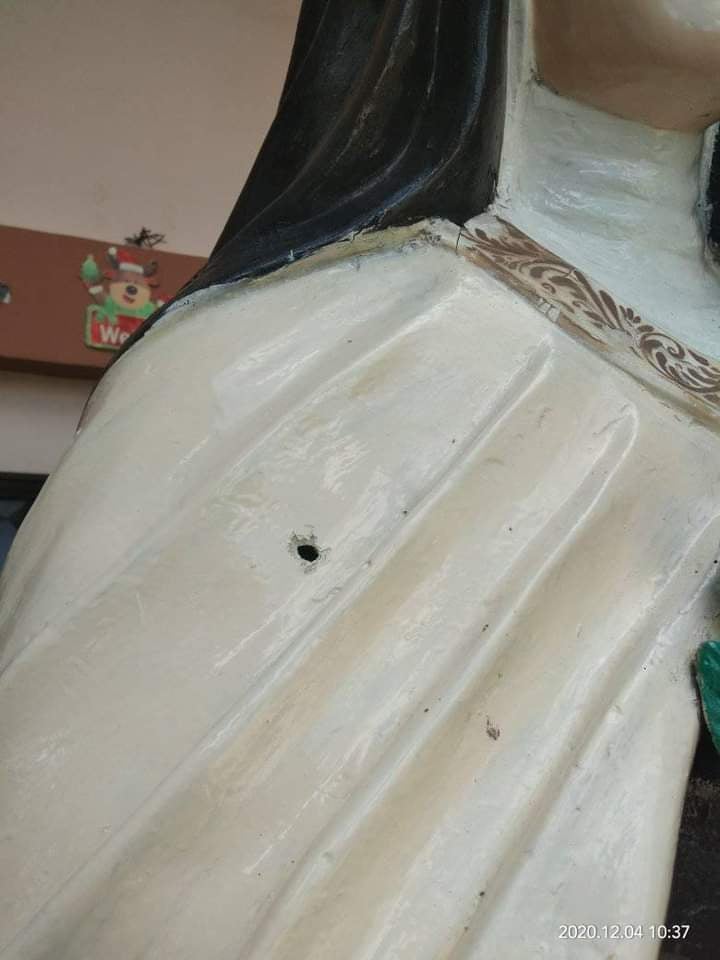 A bullet hole is visible on an image of Sta. Teresita, patron saint of Catholics in Datu Piang town, Maguindanao, following an attack by terrorists on Dec. 3. PHOTO FROM FR. DENZ BASADA, OMI

The relief of Bayona came days after gunmen from Bangsamoro Islamic Freedom Fighters (BIFF), who have sworn allegiance to IS, laid siege to the police station of Datu Piang and burned a police patrol vehicle.

Bayona has been reassigned to the BARMM police regional headquarters in Parang town, Maguindanao, according to Rodriguez.

The BIFF gunmen, belonging to the IS group Dawla Islamiya, were believed to be targeting Bayona when they stormed the police and Army outpost at a village in Datu Piang.

Lt. Col. Anhouvic Atilano, speaking for the Army’s 6th Infantry Division, said the gunmen were out to get Bayona, who had led the arrest of two men with relatives in the BIFF prior to the terrorists’ siege.

The attack sent civilians, majority of them Muslims, cowering in fear in their homes while others running to safety as the terrorists, many of whom were teenagers, opened fire at houses.

Bullet holes were visible on tinted glass windows of the parish church and one found its mark on an image of Sta. Teresita, the town’s patron saint.

Initial findings by the Special Investigation Task Group said the attack could be in retaliation for the killing of Abu Suffian, a BIFF member, in Cotabato City last Dec. 1.

Suffian was suspect in a bomb attack in front of a Cotabato City mall on Dec. 31, 2018 that left two persons dead.

Police are also considering as a motive the alleged rivalry involving town officials, one of whom has close relatives in BIFF.

Rodriguez had announced that police would file a string of criminal charges against Salahuddin Hasan, alias Salah, and Muhiden Indong, alias Commander Motorola, for the Datu Piang attack.

Abu Jihad, who claimed to be spokesperson of BIFF Kagi Karialan faction, said illegal gambling and unIslamic activities, like the sale of drugs, and other illegal acts prompted the BIFF raid.

Police and military officials, however, said there was an attempt to burn the two Church facilities which was foiled by policemen and soldiers from the 6th Infantry Battalion.

Government troopers deployed to the back of the church had traded gunshots with the BIFF group.

“I commend the police and soldiers who withstand (sic) the attack and foiled attempts to burn the church,” Rodriguez said. “Unfortunately, a police car was torched.”

Rodriguez also ordered the deployment of SAF troopers to towns near Datu Piang, where BIFF operates.