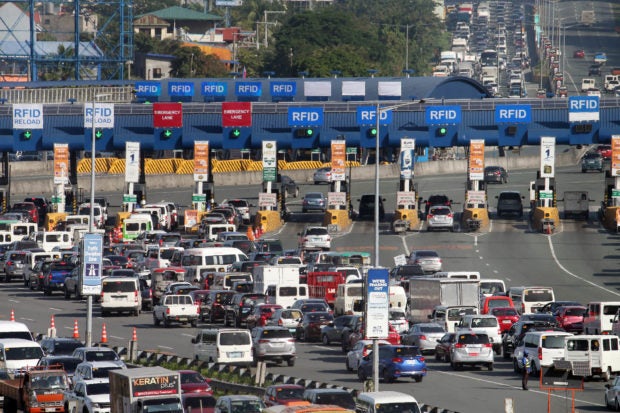 SLOW LANES Motorists endure the traffic along North Luzon Expressway on Dec. 1, as full cashless transactions are implemented there for the first time. —NIÑO JESUS ORBETA

MANILA,  Philippines — Toll operators may lose their concession contract with the government unless they fix glitches in the implementation of mandatory cashless payment on expressways, which have resulted in massive traffic jams over the past week, a senator warned on Sunday.

Sen. Sherwin Gatchalian called for a review of the agreement between the government and Metro Pacific Tollways Corp. and San Miguel Corp. Tollways, urging the operators of the North Luzon Expressway (NLEx) and the South Luzon Expressway (SLEx) to get their act together.

In a statement, Gatchalian said he would file a proposed resolution within the week calling for a Senate inquiry into “issues of nonperformance and other possible violations” in the implementation of the Radio-Frequency Identification (RFID) program.

Gatchalian criticized the two toll operators for failing to repair malfunctioning RFID sensors at toll plazas before the Dec. 1 deadline for cash transactions, which had contributed to bottlenecks on the expressways.

The senator cited several complaints of defective sensors that could not detect RFID tags on vehicles using the NLEx interchange going to Valenzuela City.

“It’s obviously the [responsibility] of the toll operators to ensure that the RFID sensors are working and should be able to read each and every car sticker that passes through it because otherwise, what’s the use of this kind of technology if it does not serve its purpose?” he said.

Gatchalian also assailed the Toll Regulatory Board (TRB), which regulates the operation and maintenance of toll facilities, for “failing to lift a finger in the wake of numerous complaints from motorists of long queues and traffic congestion.”

Under the implementing rules signed by the TRB, toll operators are required to “ensure at all times the efficient operation and maintenance of the toll collection facility,” according to the senator.

“Such is an utter display of callousness to the plight of the motorists who, because of technical glitches and apparent inaction of concerned authorities, get stuck in traffic for hours,” Gatchalian said.

“It’s all over the news that snags in the installation of RFID stickers prior to and especially on the day of the start of the cashless toll collection resulted in the high volume of cars along the expressways. This has been happening for several days now,” he said.

“Had there been any clear sign or action from the concerned parties in resolving this monstrous traffic jam? None,” Gatchalian said.

“The public expects to take [its] cue from the authorities but obviously no one is taking the lead,” he added.

“Toll road operators have the temerity to exact fees from the public without any commensurate services. It’s deplorable to say the least,” the senator said.

“I see the need for a cashless toll collection system at the expressways, especially at this time when we have yet to contain the spread of the coronavirus disease (COVID-19),” he said.

“But we cannot just sit back and allow motorists to be stuck in traffic. Time wasted cannot be regained,” the senator added.

Billions of pesos are lost due to traffic congestion, Gatchalian said, citing the 2017 survey of the Japan International Cooperation Agency (Jica), which found that the traffic problem in Metro Manila cost P3.5 billion in lost opportunities per day.

That Jica study projected that amount to balloon to P5.4 billion daily by 2035 if no interventions were made.

Gatchalian issued the stern warning a day after similar ultimatums were made by his brothers, Valenzuela City Rep. Wes Gatchalian and Valenzuela City Mayor Rex Gatchalian, who both complained of RFID glitches to and from NLEx booths in their city.

The Valenzuela representative on Saturday urged the Department of Transportation (DOTr) to stop the implementation of the cashless toll collection system until the operators resolved the glitches in their RFID systems.

The mayor, on the other hand, threatened to suspend the NLEx Corp.’s business permit for its “RFID fiasco.”

On Dec 1., the government implemented mandatory cashless transactions on expressways but permitted dedicated lanes for the installation of RFID tags on vehicles still without them. Motorists will not be apprehended for not having tags until mid-January.

Earlier, Senators Grace Poe and Nancy Binay asked the DOTr to consider extending the window of time motorists were allowed to use the expressways without RFID tags, considering the huge numbers who had yet to comply. —DJ YAP INQ