MANILA, Philippines — A son of recently slain National Democratic Front of the Philippines (NDFP) peace consultants on Saturday said his elderly and ailing parents could not have exchanged gunfire with the police and that he could have have fought for them in court had they been taken alive.

VJ Topacio, son of Agaton Topacio and Eugenia Magpantay, both 68, was responding to a statement made earlier by Philippine National Police chief Gen. Debold Sinas who said the couple, who spent many years in the communist underground, would not have given up quietly.

The police said they were to serve a search warrant on the couple at their home in Angono town, Rizal province, at 3 a.m. on Nov. 25 when they were met by gunfire.

It was unclear if the couple were charged with any specific crime.

Sinas said in an interview with ANC on Thursday that the family could seek an investigation if they believed the PNP committed wrongdoing, but he urged people “not to jump to conclusions.”

Responding to Sinas in a Facebook post on Saturday, VJ, a human rights lawyer, said his parents would have called a lawyer instead of fighting.

“You do not fight fair,” he told Sinas. “I would have asked that you arrest them. I could have fought for this in court. When they were killed, I wish you had allowed us to retrieve their bodies. But you hid them and you didn’t turn them over immediately.” 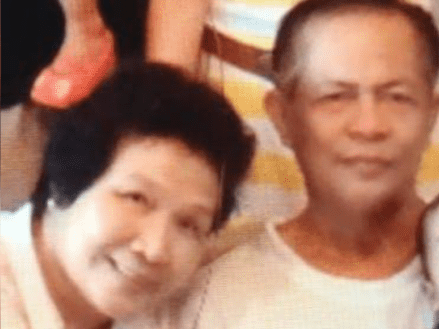 LATEST TO FALL Agaton Topacio and Eugenia Magpantay, both 68, were killed when they allegedly fought a group of police officers who were to serve them a search warrant at their home in Angono town, Rizal province, on Nov. 25. Their sons said the elderly couple, who were suffering from various ailments, could not have put a fight and believe they were executed. —CONTRIBUTEDPHOTO

The Communist Party of the Philippines said the couple were sickly and had already retired as peace consultants to the NDFP.

But age had nothing to do with it, Sinas said.

“They were leaders and spent a lot of time in the underground movement. They were properly trained,” he said.

Sinas defended the police action and said the warrant was served at that time of day to prevent Magpantay and Topacio from learning about it.

“If it was served during daylight hours, everyone would have seen, they could have spotters or contacts who could warn them and they’d likely have escaped,” he said.

But another son, Tony Topacio, said in a separate Facebook post on Thursday called the killing “an execution, murder in the highest degree possible, an assassination.”

“Overkill would be a huge understatement,” he said.

Tony described his father as “an artist throughout his life,” who spent his time making bonsai.

He said his mother was “sickly and feeble … who was a teacher all throughout her life, in her last hours, would have been found armed with ‘pointed sticks’ that could be used for puncturing the eyes of ugly enemies but generally used for writing.”

VJ earlier said his mother suffered from diabetes and recently went into a four-day coma, while his father was in constant pain due to enlargement of the heart, a knee injury and frozen shoulder.

“There is simply no way that the elderly couple was even able to put up a resistance, let alone an armed one, against dozens of policemen,” he said.

Tony described his parents as “simple, elderly retirees who just [wanted] to be left alone in peace after a life of championing the oppressed, the farmers, the peasants, the workers, and the Filipino.”

“They could not have, overnight, summoned their inner Keanu Reeves and downloaded all the necessary skills to repel the ‘tokhang’-like maneuvers popularized early in the Duterte regime but was birthed much earlier down in the South back in the day,” he said.

Reeves is a Hollywood actor, popular for his action movies.

The brothers also said the police gave them the runaround before they were able to retrieve the remains of their parents.

VJ said they learned about the death of their parents only from their neighbors, not the police.

When the brothers sought to recover the remains, the police directed them to go from one place to another—from a Rizal police station, to other stations in Angono and Antipolo and to as far away as Camp Vicente Lim in Laguna province.

“Fortunately, my brother was able to locate them at Antipolo Memorial Homes where he was able to identify our parents,” VJ said.

Still the police did not immediately release the bodies, demanding that his brother produce identification for their parents.

When they finally recovered the remains, the police gave them no documentation regarding their deaths such as an investigation, a medicolegal or even just a spot report, VJ said.

“We literally got zero [papers]. We were only able to recover the bodies,” he said.

He told the Inquirer on Saturday that his parents’ remains had already been cremated.

The brothers had already sought the help of the Commission on Human Rights in probing the killing.

Topacio and Magpantay were the latest NDFP consultants killed this year.

Randall Echanis was beaten and stabbed to death in Quezon City in August. Another consultant, Randy Malayao, was shot to death while sleeping inside a bus in Nueva Vizcaya in January.

President Duterte terminated talks to end the 52-year-old insurgency in 2018, saying the rebels continued attacking soldiers and police despite the ongoing negotiations.

—With a report from Patricia Denise M. Chiu