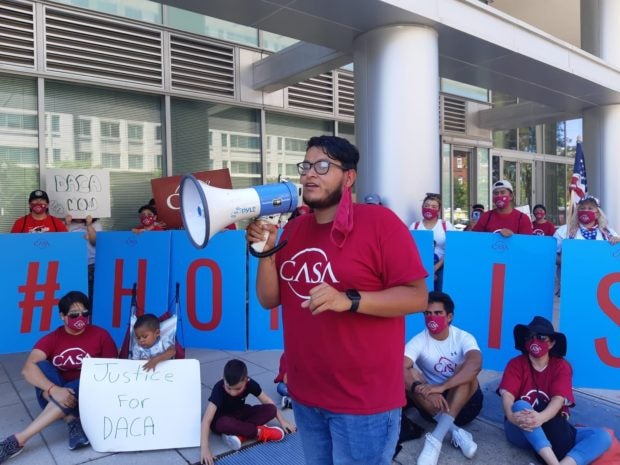 Dreamer Jorge Benitez speaks on microphone during a rally to protest the announcement that the US government will not accept new applications for protection for “Dreamers” in Washington on July 29, 2020. – Jorge and Bayron (not pictured) Benitez are siblings. They both came to the United States as undocumented children with their mother. Jorge is sheltered by an immigration program that allows him to work, but his younger brother isn’t after President Donald Trump ended protections granted under an Obama-era policy. (Photo by Ariela NAVARRO / AFP)

WASHINGTON, United States  – A US judge ordered the Trump administration Friday to fully reinstate a program that protects from deportation immigrants who came to the country illegally as children.

The administration must allow newly eligible immigrants to apply to the so-called DACA program, Judge Nicholas Garaufis of the US District Court in Brooklyn wrote.

Over the summer, the administration had issued a memo limiting the program to those who were already enrolled.

Then-president Barack Obama instituted DACA by executive order in 2012 to help some of the more than 10 million people estimated to be living in America without documentation.

It applied to people who were brought into the United States illegally as children and then grew up here. For many it is the only country they have ever known.

As part of his crackdown on all kinds of immigration, Trump moved to end the program in 2017, calling it unconstitutional.

The case ended up in the US Supreme Court, which ruled in June that the Trump administration had not followed proper administrative procedures to end the policy.

But in response, the Department of Homeland Security reinstated it only partially. It limited DACA to those already enrolled, rather than allow new applicants as well. And it cut the length of DACA permit renewals to one year, rather than the two years the program had allowed.

On Friday, Garaufis said Homeland Security must announce the full reinstatement of DACA on its website by Monday.

More than 300,000 new applicants could now be eligible for DACA, the Center for American Progress think tank said.

“This is a really big day for DACA recipients and immigrant young people,” said Karen Tumlin, director of the Justice Action Center, who litigated the class-action case.

Immigration is a hot button issue in the US, and Congress over the years has failed repeatedly to pass reform legislation dealing with the millions of people living in the country without authorization.

Prospects for Dreamers to live and work in the US permanently, rather than just with renewable permits, remain unclear.

President-elect Joe Biden has vowed to restore DACA when he takes office in January.