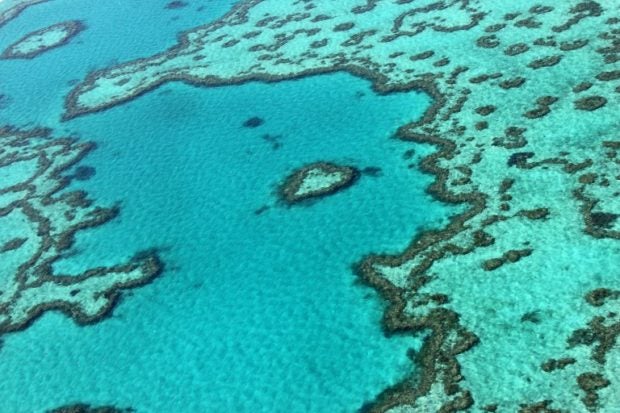 (FILES) This file photo taken on November 20, 2014 shows an aerial view of the Great Barrier Reef off the coast of the Whitsunday Islands, along the central coast of Queensland.
Australia’s under-pressure Great Barrier Reef is an asset worth Aus$56 billion (US$42 billion) and as an ecosystem and economic driver is “too big to fail”, a study said June 26, 2017. The World Heritage-listed reef is the largest living structure on Earth and its economic and social value was calculated for the first time in the Deloitte Access Economics report commissioned by the Great Barrier Reef Foundation. / AFP PHOTO / Sarah LAI

The International Union for Conservation of Nature (IUCN) revealed in a new report that shifts due to the changing climate now imperil a full third of the 252 UNESCO-listed natural sites around the globe.

Overall, 94 of the sites are facing significant or critical risk from a wide range of factors — including tourism, hunting, fire and water pollution — marking an increase from the 62 listed in the previous study published in 2017.

The study also hinted that the COVID-19 pandemic was taking a toll on some of the world’s most beautiful and precious natural places.

However, climate change is by far the biggest single threat.

It constitutes a high or very high risk factor at 83 of the sites, and has thus overtaken invasive and non-native species, which topped the threat list three years ago.

The report “reveals the damage climate change is wreaking on natural World Heritage, from shrinking glaciers to coral bleaching to increasingly frequent and severe fires and droughts,” IUCN director-general Bruno Oberle said in a statement.

“This report signals the urgency with which we must tackle environmental challenges together at the planetary scale.”

The coronavirus crisis had showed the need for the global community to “stand together and work as one for the common good,” the IUCN report said.

Since its assessment had begun before the novel coronavirus first surfaced late last year, IUCN said it had systematically recorded how the crisis was affecting the World Heritage sites.

But the report said it was becoming clear that the pandemic and associated restrictions were impacting or had the potential to impact more than 50 of the sites.

Some of the effects were positive, “most notably a decrease in pressure from tourism visitation on natural ecosystems,” it said, warning though that “negative factors are numerous.”

It pointed to how the closing of sites to tourism were causing a significant loss of revenues and livelihoods, as well as how limits on in-person staffing had led to reduced control over illegal activities.

“These factors are increasing the risk of wildlife poaching and illegal use of natural resources, with incidents recorded in some sites since the pandemic,” the report said.

Overall, the study found that 30 percent of the sites faced “significant” threats, and seven percent are considered “critical”, meaning they “require urgent, additional and large-scale conservation measures” to be saved.

Alarmingly, two new sites have been moved up into the critical category since 2017, including the world’s largest coral reef.

Australia’s Great Barrier Reef has seen dramatic coral decline amid ocean warming, acidification and extreme weather, which in turn has resulted in shrinking populations of marine species, the report found.

Protected areas in Mexico’s Gulf of California are also among the sites now deemed in critical condition, joining the likes of the Everglades National Park in the United States and Lake Turkana in Kenya, which already figured on the list.

Brazil’s Pantanal Conservation Area was meanwhile badly damaged by unprecedented wildfires in 2019 and 2020.

Meanwhile, the rapidly-melting Kaskawulsh Glacier had altered the river course, depleting fish populations in the Kluane site in Canada and the United States.

The IUCN report found that eight sites had improved since 2017, but double as many have deteriorated in that time.