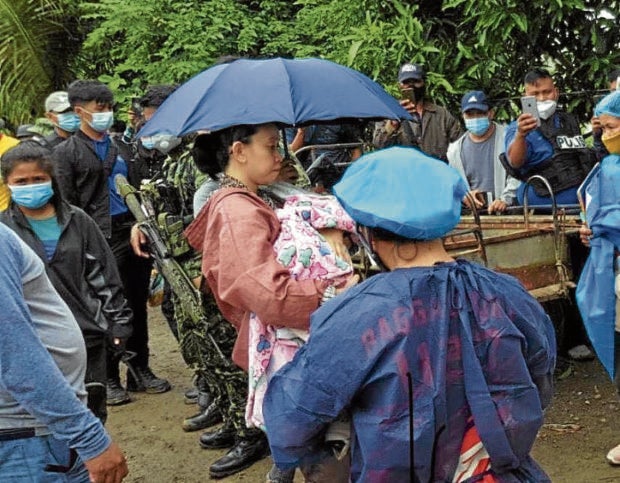 HER FATHER’S DAUGHTER Amanda Soccoro Echanis, a peasant organizer, carries her month-old son, Randall Emmanuel, following her arrest early on Wednesday. Police say they found an assault rifle, ammunition and two grenades in her house in Baggao, Cagayan province. She named her son after her father, Randall, the slain consultant to communist rebels in the aborted peace talks. —PNP CAGAYAN PHOTO

MANILA,  Philippines — To prevent a repeat of an earlier tragedy, Malacañang on Thursday called on the Department of Social Welfare and Development (DSWD) to take care of the 1-month-old child of Amanda Socorro Echanis, a daughter of slain peace talks consultant Randall Echanis, who was arrested for alleged illegal possession of firearms and explosives.

Echanis, 32, and her son are in the custody of the Criminal Investigation and Detection Group (CIDG) in Tuguegarao City after she was arrested before dawn on Wednesday at her house at Barangay Carupian in Cagayan province’s Baggao town.

Possession of grenades or other types of explosives is normally a nonbailable offense.

“We hope that would not be repeated. But I’m calling upon the DSWD to take steps to ensure that the welfare of the child would be protected,” Roque said in a press briefing.

He said that caring for a baby does not exempt a person accused of a crime from being detained, but it also does not mean that the government would neglect the child.

“It is always the rule that government will take steps for the best interest of the child,” Roque said.

Nasino was separated from her infant daughter River after a month on orders of the court which said the Manila City Jail did not have the facilities for the baby. The baby died of pneumonia three months later in a hospital.

Nasino later filed a complaint seeking the dismissal of Judge Marivic Balisi-Umali who separated her from her child, saying the judge “acted with conscious indifference to the rights of the complainant and her coaccused.”

Echanis’ mother, Linda Lacaba Echanis, appealed to authorities not to separate her daughter from her grandchild.

“If you have any humanity left, you should understand why you should not have arrested and detained my daughter and her baby,” she said.

The baby, Randall Emmanuel, named after his activist grandfather who did not live long enough to see him, still had no birth certificate.

“We’re still grieving the gruesome torture and murder of my husband Randall,” Linda told reporters. “And now they have arrested my daughter and her son.”

She urged the Commission on Human Rights and the United Nations to investigate the arrest, and demanded that the Cagayan police release her daughter.

Before her arrest, Echanis and groups affiliated with the Kilusang Magbubukid ng Pilipinas (KMP) were Red-tagged by the Cagayan Valley regional information officer Ivylyn Corpino, according to the Alliance of Peasant Women (Amihan) of which she was a peasant organizer.

“It’s true that the police weren’t attempting to arrest the baby, but where is their humanity that they want to separate the baby from his mom?” said Echanis’ Amihan colleague Cathy Estavillo.

Police said Echanis insisted on keeping her baby with her following her arrest on a warrant issued by Judge Sheila Gacutan-Labuguen of the Baggao Municipal Trial Court.

“The baby was not arrested along with Echanis as claimed by some groups. In fact, an ambulance was sent with medical personnel to assist the mother and her son,” Police Lt. Col. Andree Camhol-Abella, public information chief of the Cagayan police, told the Inquirer.

The police and the military claimed Echanis, who allegedly went by the alias “Waya” or “Julian,” was the finance officer of West Front-Komiteng Probinsya ng Cagayan of the New People’s Army (NPA) operating in the region.

Her 74-year-old father, who was head of Anakpawis, was a consultant for the National Democratic Front of the Philippines in the aborted peace talks with the government. He was stabbed to death inside his apartment in Quezon City last August.

In a statement, Anakpawis said Echanis was arrested on “planted evidence.”

“She has just given birth to her first child. We call on her immediate and unconditional release on just, humanitarian grounds,” it said.

Anakpawis national president Ariel Casilao told the Inquirer that the presence of a firearm and grenades in Echanis’ home was “clearly beyond logic, for what kind of mother would stock such dangerous weapons near her baby?”

Adviento’s wife, Lina Dagohoy, said soldiers destroyed their door and pointed guns at them while they conducted the search “without any warrant.”

She said it took hours for police to produce a search warrant and initially found no firearms in the house. She said the guns and ammunition that were reportedly found in the house were “planted.”

Danggayan ti Mannalon ti Cagayan (Danggayan), another farmers’ group, said the arrest of Echanis and the raid on Adviento’s house “proved that the government is desperate to silence dissent.”

“The government’s disregard of the rule of law and use of its armed forces against peasant organizations show its frustration to quell the people’s movement for genuine land reform,” it said.

Adviento, who also heads the Danggayan, said he was not at home during the raid because he was coordinating distribution of relief goods for the victims of Typhoon “Ulysses” (international name: Vamco) in Cagayan.

“The attempt to arrest me and the trumped-up charges against Amanda Echanis are blatant examples of political persecution and an attack on democracy and people’s rights,” Adviento said.

Zenaida Soriano, national chair of Amihan, said helping poor farmers during calamities was not a crime.

“This (arrest) is the height of immorality and fascism when amid government neglect, it attacks those who are actively uplifting the welfare of the marginalized and oppressed,” she said.

Amanda, a graduate of Philippine High School for the Arts and a former University of the Philippines student, was a researcher for a nongovernmental organization catering to the urban poor before she started organizing landless peasants in Cagayan Valley, according to Amihan.

She was a toddler and one of the youngest political detainees when her father was arrested in the 1990s, according to Karapatan secretary general Cristina Palabay.

“And when we spoke yesterday, she was very much the same Amanda I have met many years ago—the embodiment of her parents who are known activists, the embodiment of the Lacabas, who were known as freedom fighters during martial law,” Palabay said.

Read Next
Makabayan to fight poll disqualification bid
EDITORS' PICK
Acer Philippines welcomes you to its first flagship store
New Year, New Rediscoveries
Is your company a growth champion? Stand up and be recognized!
PNP’s Covid-19 cases jump to 9,809; 52 new infections logged
Pope Francis to miss events due to new flare up of leg pain—Vatican
More than 150 National Guard in Washington for Biden inauguration test positive for coronavirus
MOST READ
Former US envoy to PH Sung Kim appointed to State Department
Ellen DeGeneres, too, is baffled by viral Filipino soda ad
UP frat condemns red-tagging after denouncing abrogation of DND agreement
Dustin Poirier knocks out Conor McGregor at UFC 257
Don't miss out on the latest news and information.