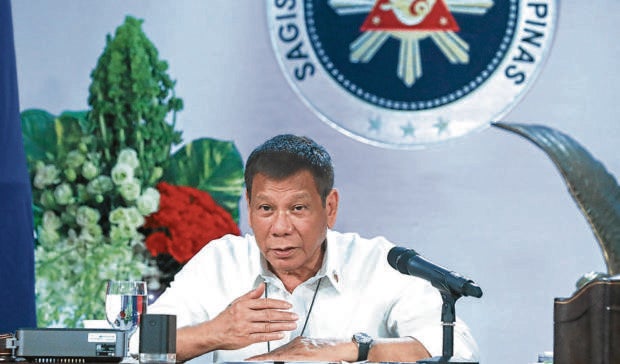 MANILA, Philipines — The Department of Justice (DOJ) is rushing the guidelines for the removal of groups and individuals from the government’s so-called terror list although the list itself has not been published, as required by the controversial Anti-Terrorism Act of 2020, which has itself been challenged before the Supreme Court.

Justice Undersecretary Adrian Sugay said the DOJ was now drafting the rules to guide the Anti-Terror Council (ATC), created by the new law, in the process of delisting suspected terrorists as stipulated in the implementing rules and regulations (IRR) of Republic Act No. 11479.

“We are in the process of crafting the rules. We hope to submit the rules for the ATC’s consideration within the month,” Sugay said. “I understand that there is a meeting [of the ATC] set for next week. We will try to finish the rules before then.”

The list itself has not been published as required by the law, although President Duterte himself tagged in a television appearance on Monday night several groups of being communist fronts.

Seeing RedAmong the groups that Duterte mentioned in his Monday tirade were the Makabayan bloc of the House of Representatives, comprised of six lawmakers from Bayan Muna, ACT Teachers party list, Gabriela Women’s party, and Kabataan party list.

“These [are] legal fronts of the communists, all of them … We are not Red-tagging you. We are identifying you as members in the grand conspiracy comprising all the legal fronts that they have organized headed by [the National Democratic Front of the Philippines, or NDFP],” Mr. Duterte said.

“The [Armed Forces of the Philippines] is very correct,” he went on. “You are being identified as the members of the communist so that we know. That is the truth, not Red tagging.”

The President made the remarks as the Supreme Court prepared to hear oral arguments in January on RA 11479 and its IRR, which has also been assailed as exceeding the provisions of the law for which it was created.

Petitioners contesting the legality of RA 11479 have argued that the power of the ATC to designate alleged terrorists—separate and distinct from the judicial power of proscription—flouted the right to due process and the presumption of innocence as enshrined in the 1987 Constitution.

Moreover, opponents of the law also decried the implementing rules for surpassing the provisions of RA 11479 when it introduced the term “reasonable ground of suspicion” in place of the judicial principle of probable cause spelled out in a provision of the new terror law.

Under the controversial terror law, the ATC, composed of eight Cabinet members, may declare a group or individuals as terrorist after it publishes its list of terror suspects in newspapers, the government’s Official Gazette and its own website.

Those identified as terror suspects may request the ATC to remove their names from the list within 15 days after it was made public.

But Justice Secretary Menardo Guevarra said that the “government’s action will depend on how delisted people act in the future.”

The legality of the law and its implementing rules, however, has yet to be determined by the Supreme Court, which has set oral arguments for Jan. 19, 2021.

To date, officially, there are 37 petitions against the said law, which is almost double the petitions filed against the reproductive health law and the anticybercrime law.