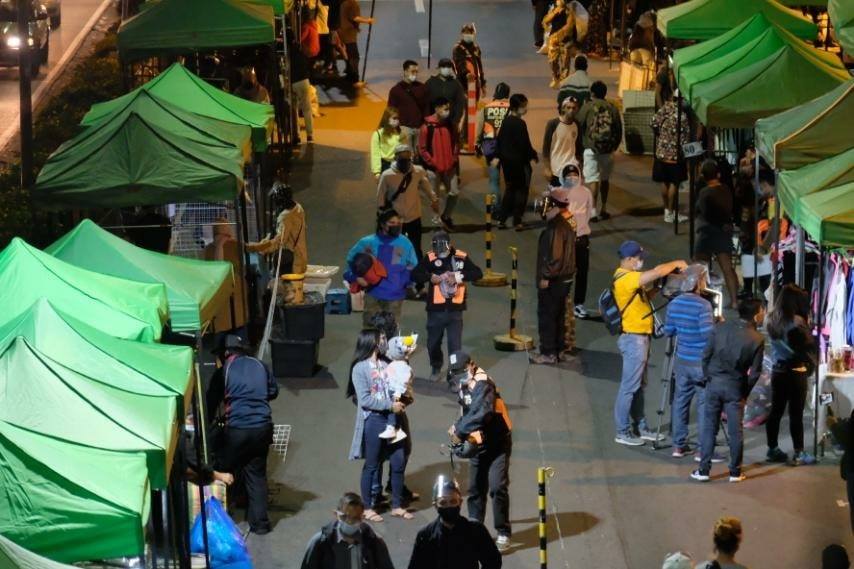 MANILA, Philippines — Mayor Benjamin Magalong admitted that he is to blame for the swelling of crowds at Baguio City’s Night Market along Harrison Road on Tuesday, but assured the public that they are working on a way to fix the crowd issue.

Magalong explained on Wednesday that he is taking full responsibility for what happened, as the influx of people in the makeshift night market near Burnham Park stemmed from an earlier Christmas tree lighting event.

He however appealed to people not to judge the actions of Baguio residents, as they have been restless after adhering to lockdown protocols set to avoid localized COVID-19 transmissions.

“Excited lang ‘yong mga tao, it’s been eight months since wala ‘yong k’wan na ‘yon, we should just understand ‘yong behavior but again as I’ve said, I’m taking full responsibility for what happened, if there’s anybody to blame ako po ‘yon,” Magalong said in a briefing held by the Department of Tourism (DOT).

“You blame me for what happened.  And I’m doing my best to correct it,” he added.

According to Magalong, they have placed several systems and health protocols to minimize the risk of coronavirus transmissions in the night market, which is usually packed with people during the wee hours of the night prior to the COVID-19 pandemic.

(What happened last night was an offshoot of what happened an hour before that.  First we had the Christmas tree lighting, then after that the people went to our night market which also opened during that night.)

“What we did was to closely monitor it on video […] at 8:30 (p.m.)manageable siya, at 9:30 dumagsa na ang mga tao, ‘don na kami nagkaroon ng problema.  After that, after an hour na-control ‘yong crowd, and at 10:30 manageable na ulit ‘yong crowd.  So meron tayong critical na oras,” he added

(At 8:30 p.m. it was still manageable, by 9:30 people already flocked to the area, that’s when we had a problem.  After an hour the crowd was controlled, and by 10:30 the crowd was again manageable.  So we have a critical time slot.)

Despite eventually managing to control the crowd, Magalong still decided to suspend the night market operations and go back to the drawing board.

“Despite the fact that we have systems in place, we have put in place several measures, crowd control issues still surfaced, and that’s the reason why at 3 o’clock in the morning I suspended the night market operations,” he noted.

Magalong was one of the speakers in a DOT briefing about helping tourist spots including Boracay — badly hit by the travel restrictions placed due to the pandemic — reopen and resume operations.

Tourism Secretary Bernadette Romulo-Puyat said that they do not have a problem with Magalong as his system has served as a guide for tourism amid the health crisis.

(We have no problem with Mayor Magalong […] we’re just grateful that he can help us also here in Boracay.)

“The systems he put in place are so efficient, there is no because of tourism.  So we hope that we can institute it in every tourist destination,” she added.

“Palagi naman naming pinapaalala, may COVID pa tayo, but then we can restart the economy, we can restart tourism provided that minimum health and safety protocols should be followed.  Kaya ‘yon talaga ang sine-stress namin talaga, kahit na nakapag-test na kayo, you know you’re negative, always wear a mask, keep a distance, and when able you wash your hands,” she stressed.

(We have always reminded them that the pandemic is still here, but we can restart the economy, we can restart tourism […] that’s what we are stressing, that even if you get tested, even if your results came out negative, always wear a mask […])

(Even if you test negative, do not go out partying.  We remind LGUs to ensure the implementation of minimum health protocols.)