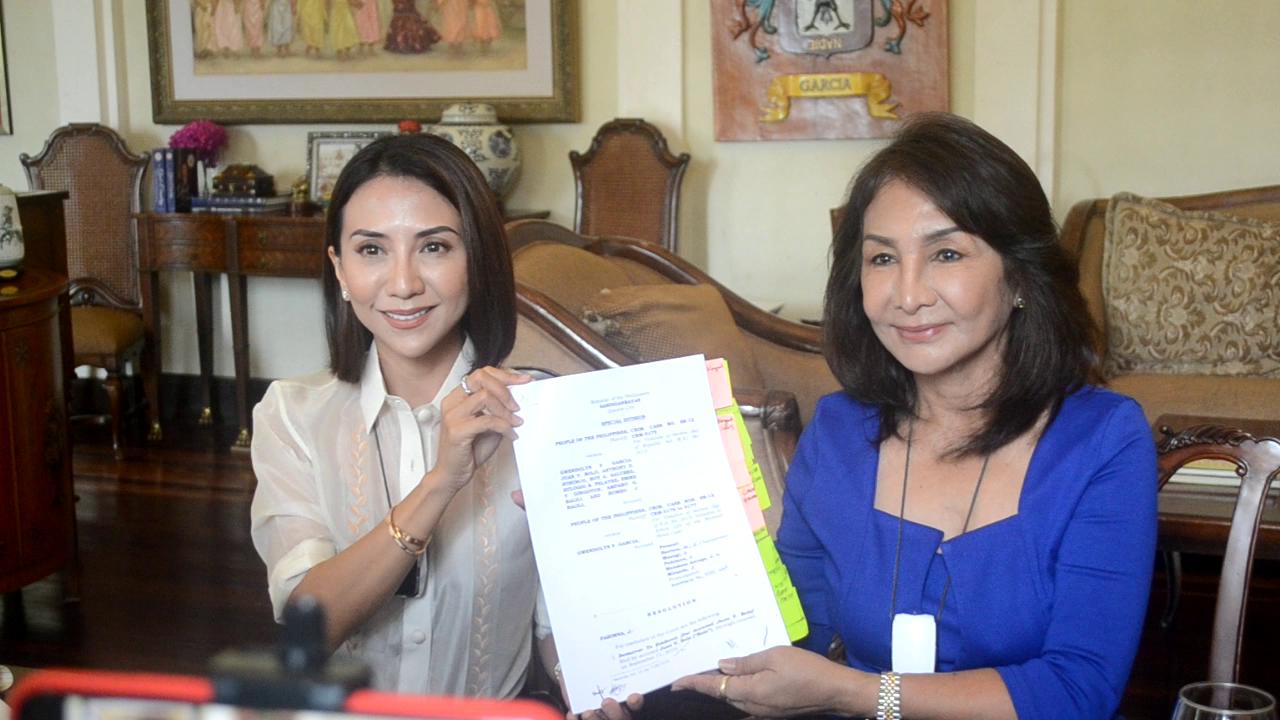 Cebu Gov. Gwendolyn Garcia (right) and her daughter Liloan Mayor Christina Garcia-Frasco (left) show the 81-page ruling of the Sandiganbayan that dismiss the criminal charges against her and seven others in relation to the controversial 2018 purchase of the Balili beachfront property in the City of Naga, south Cebu. (DALE ISRAEL/INQUIRER VISAYAS)

CEBU CITY –– Cebu Gov. Gwendolyn Garcia felt vindicated by the decision of the anti-graft court to dismiss the criminal charges against her and seven others regarding the controversial 2008 purchase of the Balili beachfront property in the City of Naga, south Cebu worth P98.9 million but which turned out to be mostly underwater.

In a press conference on Wednesday, Garcia said she and her family can heave a sigh of relief after years of being ridiculed by her opponents.

Garcia believed her political opponents were behind the case to besmirch her reputation. She did not name the person she was referring to.

“I feel that once again it has been proven that the truth will set us free (and) justice has been served,” Garcia said. “Even before the decision came out, the Cebuanos themselves vindicated me because I won the elections overwhelmingly.”

During the press conference at the Capitol, Garcia was joined by her daughter Liloan Mayor Christina Garcia-Frasco, who was equally jubilant of the Sandiganbayan decision.

“Governor Gwen did nothing more or less than to act in the best interest of the Cebuanos. We have always believed that to be her intention, and it took eight years for this court decision to be put on paper. We have been behind her all this time,” Mayor Frasco said.

“I also could not help but think of our family who would have been so happy to learn of this decision as well. That includes the late Inday Esperanza, former Mayor Nelson, and Mayor Marlon Garcia.”

The two siblings of the governor died last September.

“I hope that up above, they know that once and for all Governor Gwen was vindicated and that lolo Pabling has lived to see justice served, finally after all these years,” said Mayor Frasco, who is also among the lawyers who defended the governor.

In its decision promulgated on Nov. 26, the Sandiganbayan said the prosecution failed to prove the guilt of the accused as well as five other former government officials and two owners of the property, who were accused of violating the Anti-Graft and Corrupt Practices Act.