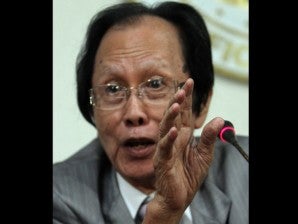 Retired Supreme Court Justice Serafin Cuevas on Monday said there was no truth to a Philippine Daily Inquirer story which reported him as saying that someone from Malacañang had tried to pressure him into quitting as chief lawyer for impeached Chief Justice Renato Corona.

Supposedly in exchange for withdrawing as chief defense counsel in the Corona case, criminal charges would be dropped against Magtanggol Gatdula, the sacked chief of the National Bureau of Investigation and, like Cuevas, a member of the Iglesia ni Cristo (INC).

Interviewed on Radyo Inquirer, Cuevas also denied having said that he was subjected to some form of “harassment” by the Bureau of Internal Revenue over family-owned buildings in Quezon City, days after Corona’s  impeachment trial began on January 16.

“That is not true. I did not say anything like that. I deny that,” Cuevas said in Filipino.

In the Inquirer story, the 83-year-old retired justice said he was approached by one of his former law students—whom he described as now one of  Malacañang’s “rah-rah boys”—and asked to leave the defense team. In exchange for his withdrawal, the kidnapping case against Gatdula would be dropped.

Cuevas identified the supposed Malacañang emissary but asked the Inquirer to withhold the person’s identity.

In the Radyo Inquirer interview, Cuevas categorically denied the story.  He even apologized to Malacañang for the story.

“Nobody talked to me. I hope Malacañang would forgive me, I did not say anything like that,” he said.

Cuevas said Gatdula’s being an Iglesia member like him  might have fueled speculation about the supposed proposed  deal for him to withdraw from Corona’s defense panel.

“That’s what many of our friends in the media thought, because we are both members of the Iglesia,” Cuevas said. “(But) but there was no maneuvering. Nobody talked to me.”

“And who is Serafin Cuevas that Malacañang would bother to talk to me? I am a volunteer for Chief Justice Corona. He can change me anytime,” Cuevas said.

The Palace on Monday maintained it had not pressured anyone involved in the impeachment trial.

She said the issue was Corona’s ability to acquire his assets considering his income.

“After all, (Internal Revenue) Commissioner Kim Henares’ testimony last week has not, to date, been rebutted by the defense,” Valte said in a separate, prepared statement.

“We hope Justice Cuevas will give as much emphasis to his retraction as he did to his initial claim. The country cannot afford distractions of this sort from the impeachment trial proceedings.”

Valte said the Palace considered these issues “peripheral” and “collateral.”

“We should focus really on what the substance of the impeachment is,” she said.