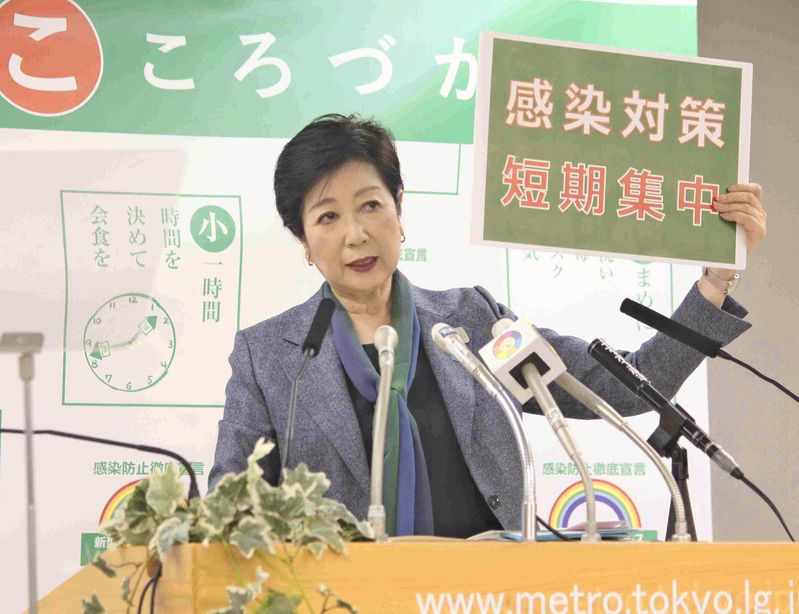 Tokyo Gov. Yuriko Koike calls for cooperation with the request for shorter hours in restaurants and other establishments at a press conference on Friday. (The Yomiuri Shimbun)

TOKYO — In the midst of a resurgence of novel coronavirus infections, the Japanese government is rushing to review the Go To Travel tourism promotion campaign. It has already decided to restrict travel involving the cities of Osaka and Sapporo, only to be criticized for its lagged response.

Now the focus is expected to shift to Tokyo, where it is widely believed that the government will soon restrict the campaign in line with the intentions of the metropolitan government.

At the request of the governors of Osaka Prefecture and Hokkaido, the government on Nov. 24 suspended subsidies for travel to destinations in Osaka City and Sapporo, including existing reservations. The suspension applies to trips departing on or before Dec. 15.

However, criticism grew over the fact that the restrictions only applied to travelers arriving in those cities. So the government on Friday also asked residents of both cities to refrain from using the travel campaign through Dec. 15.

As for other areas where infections have spread, Land, Infrastructure, Transport and Tourism Minister Kazuyoshi Akaba, who is in charge of the project, said at a plenary session of the House of Councillors on Monday, “We will consider the [suspension of the campaign] based on opinions of the government’s subcommittee on measures against the coronavirus, as well as those of the governors of each prefecture.”

One of the next candidates for restrictions is Tokyo. Shigeru Omi, the chairman of the subcommittee, has expressed his opinion that the infection situation in Tokyo’s 23 wards meets to the criteria for considering the suspension of operations.

The metropolitan government appears to consider such options as restricting the campaign operation only within the 23 wards, and just calling the residents to refrain from traveling.