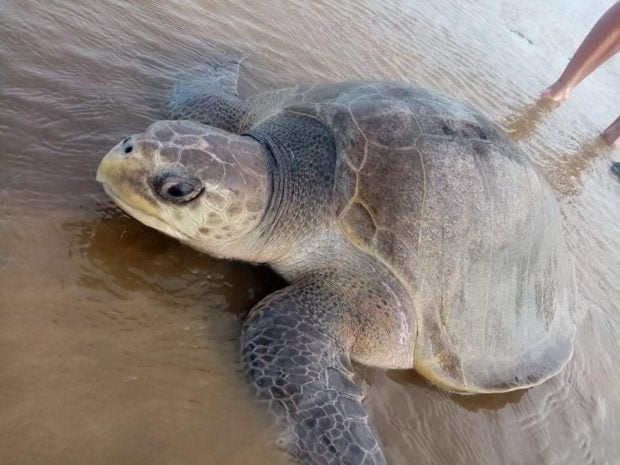 Mayor Matt Florido, in a post on his Facebook, reported that barangay residents found the turtle at 9 a.m.

“I immediately dispatched the Menro (municipal environmental and natural resources office) to proceed to the area and returned the turtle into the sea,” Florido said.

Florido said the authorities put a tag on the turtle indicating that it was found in their locality, which he described as “the town with a heart.”

Authorities examined the turtle before it was returned to the bay.

Jay Lim, project officer of environmentalist group Tanggol Kalikasan (TK), said the turtles usually climb up to the shore to lay and hatch their eggs from October to December.

He urged local authorities to search for the turtle nesting sites along the coasts and protect the area.

The International Union for Conservation of Nature and Natural Resources listed the green sea turtle as “endangered (facing a very high risk of extinction in the wild).”

Green sea turtles have an average life span of up to 80 years and can grow up to five feet and weigh up to more than 300 kilos.

Republic Act No. 9147 (Philippine Wildlife Resources Conservation and Protection Act) prohibits the hunting, selling, and killing, as well as collecting of the eggs, of endangered species.