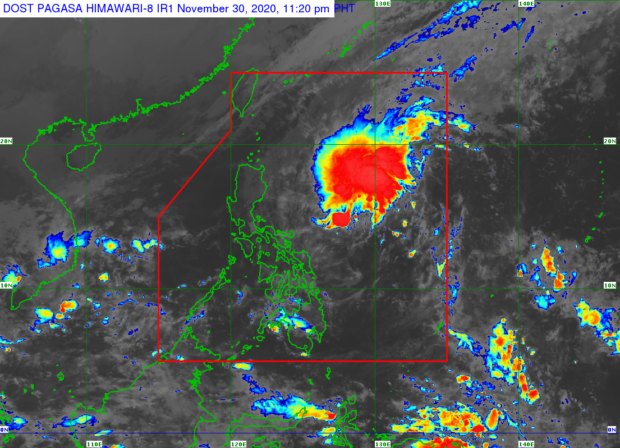 The first days of December will bring rain to residents in Southern Luzon and Visayas regions as a low pressure area (LPA) moves closer to the country this week.

Its effects will be compounded by the tail-end of a frontal system, resulting in several provinces in Luzon and Visayas experiencing cloudy skies with scattered rain showers and thunderstorms on Tuesday, according to the Philippine Atmospheric, Geophysical and Astronomical Services Administration (Pagasa).

As of 3 p.m. Monday, the weather disturbance was estimated at 475 kilometers east of Legazpi City in Albay province and was likely to make its presence felt to residents in Bicol and Eastern Visayas, as well as in the provinces of Quezon and Aurora.

In an earlier weather advisory, Pagasa said the LPA remained less likely to become a tropical depression by Tuesday.

Senior weather specialist Chris Perez, however, said provinces in Southern Luzon and Visayas should still prepare for inclement weather as the LPA moves closer to land.

Residents in affected areas were advised to brace for potential flash floods or landslides due to moderate or heavy rain.

In Luzon, cloudy skies with light rain will prevail over Cagayan Valley, the Cordillera Administrative Region and Nueva Ecija province due to the northeast monsoon or “amihan.”

With the ground still possibly saturated with water due to previous storms, especially in areas upstream of rivers and their tributaries, residents should watch out for potential flooding, Perez said.

Cloudy skies with isolated rain showers due to local thunderstorms will also prevail in Metro Manila and the rest of the country on Tuesday. INQ