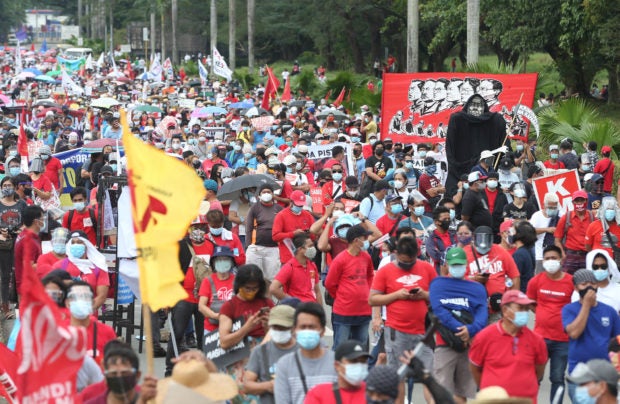 BONIFACIO’S HEROISMHAILED Workers led by Kilusang Mayo Uno stage a rally at the University of the Philippines Diliman to mark the 157th birth anniversary of Andres Bonifacio and to protest Red-tagging and the new terror law. —NIÑO JESUS ORBETA

President Duterte on Monday participated in an online commemoration of the 157th birth anniversary of Andres Bonifacio, calling on the Filipinos to relive the values that the hero fought for more than a century ago.

“His love of country—which aroused our ancestors to fight for our freedom and secure our rightful place in the community of nations—is very vital now, more than ever, as we overcome the challenges of COVID-19 pandemic,” Mr. Duterte said in a video message aired during the televised commemoration at the Bonifacio Monument in Caloocan City.

Recalling Bonifacio’s extraordinary courage and determination, Mr. Duterte encouraged Filipinos to come together in overcoming challenges in order for the nation to secure a much better and brighter future for every citizen.

“As we remember his life and deeds, may the values he fought for, inspire us all to become worthy heirs of the just, progressive, and inclusive society that he envisioned more than a century ago,” he added.

The Bonifacio Day rites at the monument was led by Defense Secretary Delfin Lorenzana and Caloocan Mayor Oscar Malapitan. They were joined by Caloocan City Rep. Dale Gonzalo Malapitan and National Historical Commission of the Philippines chair Rene Escalante, among other officials.

For her part, Vice President Leni Robredo reminded Filipinos that courage was not “bluster, or power, or brute strength; but the courage of compassion” in her official message marking Bonifacio Day.

“This courage is not a farce, but the kind that doesn’t fold in the face of adversity. It is rooted in love for fellow Filipinos and in the belief that nobody should be oppressed or left behind, and that everybody has the right to dream and to forge a better life in a more just, free and humane society,” she said.

Meanwhile, a broad coalition of organizations joined the protests at the University of the Philippines Diliman to mark Bonifacio’s birth anniversary on Monday, vowing to fight back in the “civil war” that the Duterte administration was waging against rights activists and critics.

Former Anakpawis representative Ariel Casilao said that were Bonifacio alive, he would have been “first on the list of the Red-tagged and accused as a terrorist” under the Duterte regime.

“The Duterte regime is [antithetical to] Bonifacio’s legacy. It is a puppet of foreign superpowers, it is an oppressor of the Filipino people, it is the scourge of the toiling masses. To honor Bonifacio means to defend the people and oppose the Duterte regime,” he said.

Echoing his sentiment, farmer group Kilusang Magbubukid ng Pilipinas said that the Duterte regime’s propensity to vilify its perceived enemies, including farmers fighting for their right to life and land, was “an affront to the revolutionary legacy of Andres Bonifacio and our forefathers who sacrificed their lives in war to achieve the freedoms and democracy that we are enjoying today.”

In Pampanga province, some 400 activists from the Bagong Alyansang Makabayan gathered at Plaza Miranda in Angeles City on Bonifacio Day to demand a stop to supposed state terrorism under the Duterte administration.

Around 30 riot police met the activists as they marched toward Plaza Miranda at around 10:30 a.m.

In Baguio City, activists’ groups marked Bonifacio Day with a protest at Malcolm Square. Carrying placards, the protesters asked the government to uphold indigenous peoples’ rights and livelihood. They also expressed their opposition to the jeepney phaseout and the privatization of the Baguio public market. —With reports from Tonette Orejas and Kimberlie Quitasol INQ