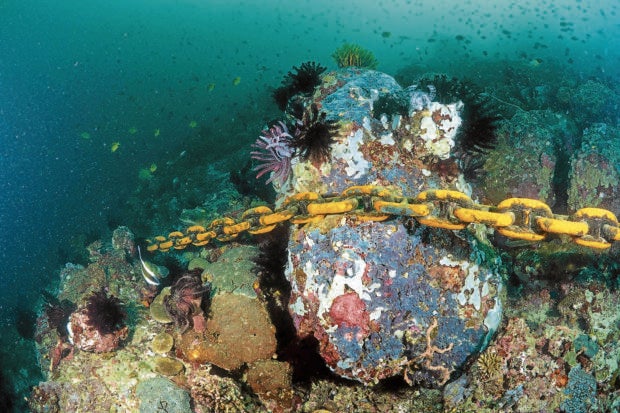 CHAIN ON A REEF An anchor chain from a stranded ship lands on a coral reef at Batalang Bato marine sanctuary in Tingloy, Batangas.—PHOTO COURTESY OF DANNY OCAMPO

But even so, the team urged the owner of the MV Princess Annabelle to survey and find the means to remove the vessel, either by dismantling or dragging it off the reef.

Once the ship is removed, a more comprehensive assessment by the Department of Environment and Natural Resources is necessary “to determine the full extent of the damage and to estimate the economic value … to restore [and] to compute possible claims against the company,” said environmental conservationist Danny Ocampo.

“It should be noted that [the] removal of the vessel is the first priority so that the … protected reef can return to its natural state as soon as possible,” he said in an online interview on Monday. Ocampo led a team of nine volunteer divers that inspected the sanctuary in Barangay Sto. Tomas on Nov. 22. The group went down as far as the ship’s anchors, one hitting the reef at 25 meters and the other at 30 m deep.

Ocampo said the divers were “prepared to see the worst damage,” thinking the ship’s hull had plowed through the reef.

“But surprisingly, most of the damage [was only] from the anchors and chains of the vessel. As one of us said, it was like some divine force lifted the vessel and gently placed it [atop] the reef,” he said.One of those who helped draw up the recommendations was Alan White, president of the Coastal Conservation and Education Foundation.

Conservationists were very particular about this sanctuary that abounds with surgeonfish, snappers, groupers, sweetlips and barracuda, since the ship was swept away and drifted from the anchorage bay in Batangas City on Oct. 26 during the onslaught of Typhoon “Quinta” (international name: Molave).

The 2.5-hectare Batalang Bato was established in 2013 and was one of the first marine sanctuaries in the country. It was one of the more “well-protected” as it was declared a “no take (fishing), no diving” zone, except for research and documentation.

Princess Aldovino, chair of the sanctuary’s management committee, said the shipowner from Romblon province was working to secure a permit from the local government of Tingloy to salvage the vessel.