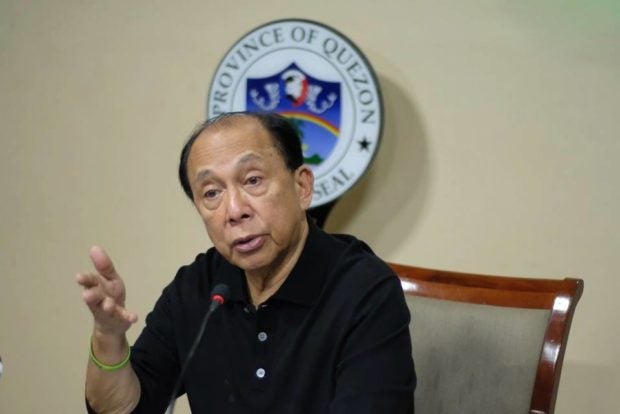 MANILA, Philippines — The Sangguniang Panlalawigan of Quezon has passed a resolution giving Governor Danilo Suarez the authority to take necessary steps, on behalf of the provincial government, to stop the Kaliwa Dam project.

The resolution was approved on November 27, with 11 of the 13 members of the provincial board, headed by Vice Governor Samuel Nantes, voting for its passage.

Earlier, Suarez opposed the construction of Kaliwa Dam as he warned of legal action against proponents of the said project.

“I’m with you, I don’t like Kaliwa dam either. If you would continue Kaliwa Dam, I’d see you in court,” Suarez told members of the Save Sierra Madre network, which is also opposing the construction of Kaliwa Dam in the town of Infanta.

“You have the support of your governor. This is my commitment to you. That will never go as long as I am the governor,” he added.

Suarez likewise questioned why the government would borrow money for the project.

“Why are we going to borrow money, and let the government ultimately pay the lender, when there are private sectors who can do the job without harming the government?” Suarez said.

In September, Presidential Adviser on Flagship Programs and Projects Vince Dizon said that Kaliwa Dam is among the government’s priority projects for water security.

To recall, in 2019, President Rodrigo Duterte gave the go-signal for the China-funded Kaliwa Dam in Quezon province, saying it is the “last resort” for Metro Manila’s dwindling water supply.

But many groups expressed concern over the project as it would pose environmental issues to livelihoods and it would displace thousands of indigenous peoples.

The Commission on Audit also raised questions over the Metro Manila Sewerage System’s  (MWSS) issuance of a notice to proceed (NTP) for the Kaliwa Dam project, including “deficiencies” in some of the requirements related to consent from affected indigenous peoples.

Read Next
US Supreme Court mulls Trump bid to exclude illegal immigrants from population count
EDITORS' PICK
PNP’s Covid-19 cases jump to 9,809; 52 new infections logged
Pope Francis to miss events due to new flare up of leg pain—Vatican
New Year, New Rediscoveries
More than 150 National Guard in Washington for Biden inauguration test positive for coronavirus
Is your company a growth champion? Stand up and be recognized!
Acer Philippines welcomes you to its first flagship store
MOST READ
AFP to apologize to UP alum falsely included in list of NPA members — Lorenzana
Former US envoy to PH Sung Kim appointed to State Department
Tennis: Alex Eala claims first pro title
Ellen DeGeneres, too, is baffled by viral Filipino soda ad
Don't miss out on the latest news and information.