In first for Australia, prime minister speaks to parliament on video link 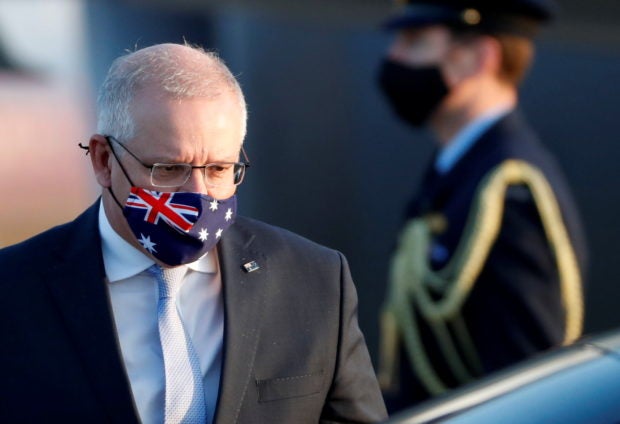 SYDNEY — Prime Minister Scott Morrison became Australia’s first leader on Monday to make an appearance before parliament by video link, as he spends time in quarantine following a recent trip to Japan.

While not the first such session by a world leader, with British Prime Minister Boris Johnson having addressed parliament online, Morrison spoke to Australian lawmakers on a big screen television placed at the back of the House of Representatives.

Morrison, who last week became the first world leader to meet Japanese Prime Minister Yoshihide Suga, spoke on the coronavirus, which Australia has largely contained, and aspects of the country’s economic recovery.

“Our relative success here in Australia sometimes shields us from the sheer scale of the devastation that has occurred elsewhere,” he said in comments that had been delayed a few minutes by technical issues.

Monday marked 24 hours with no new locally acquired infections for Australia, though its death toll rose to 908 after disease complications killed one person in southeastern Victoria state who had earlier been cleared of infection.

Australia’s tally of more than 27,800 infections is far fewer than many other developed countries.

With infections curtailed, authorities in Victoria said they would resume a system of hotel quarantine for locals returning from overseas.

The state had barred entry to Australians returning home following an outbreak of more than 20,000 cases sparked by infections among hotel workers caught from those in mandatory 14-day quarantine.

Many of the workers, who had second jobs, then carried the virus further in the community.

The outbreak was only contained after a stringent lockdown for more than 100 days in the state capital of Melbourne, home to about 5 million people.