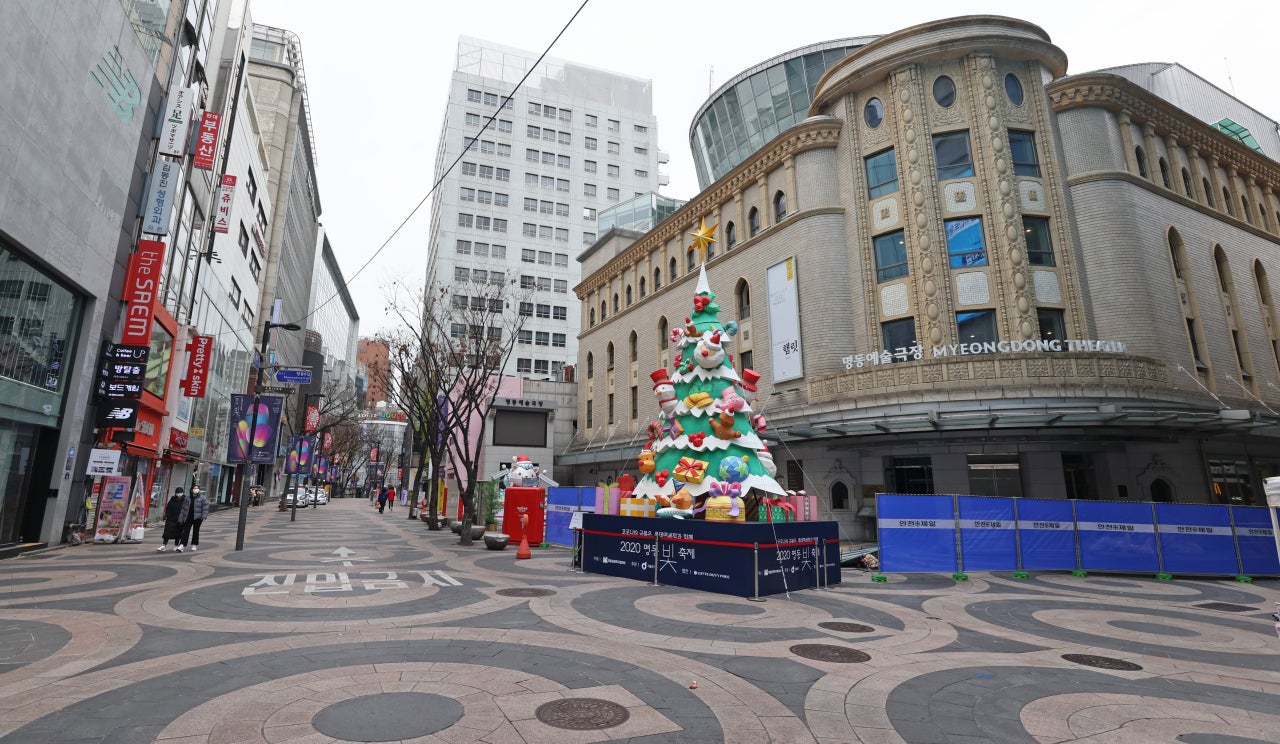 Street in Myoung-dong, a popular tourist district in central Seoul, appears empty on Sunday amid a resurgence in novel coronavirus cases. (Yonhap)

SEOUL — The South Korean government once again defied its own COVID-19 blueprint and decided against moving up to a higher level of social distancing despite recent metrics that support more intensive intervention.

In announcing the decision to keep the capital area under the current Level 2 distancing measures, Prime Minister Chung Sye-kyun said in Sunday’s emergency press conference that “excessive controls will lead to other sorts of losses that will ultimately be suffered by the people.” He went on, “This isn’t something that will stay fixed, but one that can be subject to changes as the situation evolves.”

Chung, who presides over the government’s COVID-19 response headquarters, admitted that Korea is now facing “what is the most serious crisis since the first peak in March.”

“Now it’s the people, rather than the government, who must lead the fight against COVID-19, by taking the everyday steps to thwart the risks,” he said. “Only then can we triumph against the virus.”

Korea’s count of new COVID-19 infections fell to 450 on Sunday after recording three consecutive 500-plus days as the number of tests declined over the weekend.

The nationwide test positivity rate rose to over 3 percent the same day, the highest since the summer resurgence. The positivity rate, the percentage of people who test positive out of all those who are tested, has remained above 2 percent for the last few days.

Experts point out that the government failed to abide by its social distancing blueprint, which outlines the criteria for easing and tightening restrictions based on considerations such as case rates and other epidemiological factors.

Based on the already softened guidelines that came into effect earlier this month, Korea qualifies for the second-most-restrictive tier. The seven-day average of new community-transmission-linked cases per day has recorded over 400 in the past week.

Infectious disease specialist Dr. Eom Joong-sik of Gachon University Gil Hospital in Incheon said Korea has made such compromises with the COVID-19 rules one too many times. Korea has a history of rolling back restrictions in favor of economic stability, despite not meeting the necessary benchmarks.

“When the government moved on to the least restrictive social distancing tier in October, Korea’s COVID-19 metrics were not eligible for it,” he said.

He said the rate of increase in the number of cases and the positivity rate showed an alarming trajectory. “Cases will probably continue to swell through the forthcoming week,” he said. “There is no way around it than to beef up mitigation measures not only until the Suneung but for the rest of the winter.”

Government officials have said the upcoming Suneung — the yearly college entrance exam that tens of thousands of high school seniors are expected to take, slated for next Thursday — is the target period for maintaining the current midlevel restrictions. Korea currently prohibits indoor dining past 9 p.m. and limits the operation of nightlife businesses.

Experts warn that the winter wave could be “unlike anything” the country has experienced so far in the pandemic.

“The initial wave in Daegu and North Gyeongsang Province was tied to a single community so we knew whom we had to test and isolate, and it took us a month to contain the epidemic. The second wave in summer took around two months to subside, as a higher proportion — nearly 70 percent — of cases being discovered were from community transmission,” said infectious disease specialist Dr. Lee Jacob during Saturday’s roundtable talk organized by the National Academy of Medicine of Korea.

“The latest wave of infections is anticipated to take even longer to die down because we’re not able to specify where the cases are coming from. This trend shows how prevalent COVID-19 is in communities,” he said.

As hospitalizations surge, beds are becoming scarce once again.

There were 5,759 patients with COVID-19 currently being treated in isolation either at hospitals or other health care centers as of Saturday. This is more than three times the number a month ago, when the number of isolated patients was around 1,600.

Saturday’s data showed that out of the 4,362 COVID-19 beds in the country, more than half, or 2,411, were occupied. The total number of available intensive care unit beds that can accommodate COVID-19 patients was just 69. Public doctors at the National Medical Center forecast at the Nov. 24 press conference that the remaining ICU beds would run out in the coming week.

“During the earlier spike in August and September, hospitals were overloaded when the number of isolated patients neared 5,000,” said infectious disease specialist Dr. Kim Woo-joo of the Korea University Medical Center in Guro, southern Seoul, warning that the health care systems were on the verge of breaking down.

“The only way to rein in the spread and avert an imminent health care collapse is to keep the curbs in place. How the government can protect the suffering small businesses and vulnerable workers while the social distancing lasts will be key in surviving the long COVID-19 winter.”