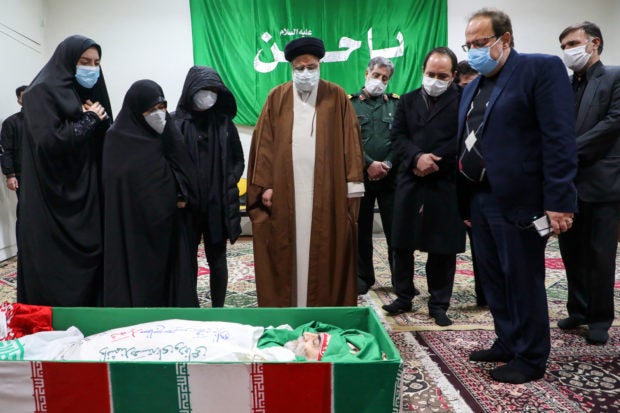 Iran’s Judiciary Chief Ayatollah Ebrahim Raisi (C) pays respects to the body of slain scientist Mohsen Fakhrizadeh among his family, in the capital Tehran on November 28, 2020. – Mohsen Fakhrizadeh, dubbed by Israel as the “father” of Iran’s nuclear programme, died on November 27 after being seriously wounded when assailants targeted his car and engaged in a gunfight with his bodyguards outside Tehran, according to Iran’s defence ministry. The assassination comes less than two months before US President-elect Joe Biden is due to take office, after a tumultuous four years of hawkish foreign policy in the Middle East under President Donald Trump. (Photo by – / MIZAN NEWS AGENCY / AFP)

TEHRAN  – Iran’s president on Saturday accused arch-foe Israel of acting as a US “mercenary” and seeking to create chaos, vowing Tehran would avenge the assassination of a top Iranian nuclear scientist.

The Islamic republic’s supreme leader Ayatollah Ali Khamenei called for the perpetrators to be punished, while President Hassan Rouhani stressed the country would seek its revenge in “due time” and not be rushed into a “trap”.

Mohsen Fakhrizadeh, dubbed by Israel as the “father” of Iran’s nuclear programme, died on Friday after being seriously wounded when assailants targeted his car and engaged in a gunfight with his bodyguards outside Tehran, according to Iran’s defence ministry.

The assassination comes less than two months before US President-elect Joe Biden is due to take office, after a tumultuous four years of hawkish foreign policy in the Middle East under President Donald Trump.

“They are thinking of creating chaos, but they should know that we have read their hands and they will not succeed,” Rouhani said.

He pinned the blame for the killing on “the wicked hands of the global arrogance, with the usurper Zionist regime as the mercenary”.

Iran generally uses the term “global arrogance” to refer to the US.

Students vented their anger by calling for revenge and burning US and Israeli flags outside Iran’s foreign ministry in Tehran, as well as pictures of Trump and Biden.

Trump unilaterally withdrew in 2018 from a multilateral nuclear deal with the Islamic republic, which sought to contain its atomic ambitions, and has re-imposed crippling sanctions. But Biden has signalled his administration may be prepared to rejoin the accord.

“This barbaric assassination shows that our enemies are in stressful weeks, during which they feel… their pressure declining, the global situation changing,” the Iranian president added.

“The nation of Iran is smarter than to fall in the trap of the conspiracy set by the Zionists.”

The United States slapped sanctions on Fakhrizadeh in 2008 for “activities and transactions that contributed to the development of Iran’s nuclear programme”, and Israeli Prime Minister Benjamin Netanyahu once described him as the father of Iran’s nuclear weapons programme.

The New York Times said an American official and two other intelligence officials confirmed Israel was behind the attack, without giving further details.

“Iran’s enemies should know, that the people of Iran and officials are braver than to leave this criminal act unanswered,” Rouhani said.

“In due time, they will answer for this crime.”

Khamenei called for “punishing the perpetrators and those responsible,” in a short statement on his official website, urging that Fakhrizadeh’s “scientific and technical efforts… in all of the fields he was working in” should be continued.

“This was a criminal act and highly reckless. It risks lethal retaliation and a new round of regional conflict,” he tweeted.

The United Nations called for restraint.

“We urge restraint and the need to avoid any actions that could lead to an escalation of tensions in the region,” a spokesman said. “We condemn any assassination or extrajudicial killing.”

Fakhrizadeh, who headed the defence ministry’s reasearch and innovation organisation, died after medics failed to revive him following the attack near Absard city in Tehran province’s eastern Damavand county.

Israel has refused to comment on the assassination, but Channel 12 television said the alert level had been raised at its embassies worldwide. A spokeswoman for the Israeli foreign ministry in Jerusalem refused to confirm the report.

Berlin called on “all parties to avoid taking any action which could lead to a new escalation,” a foreign ministry spokesman told AFP.

Iran’s ally Syria called it “a terrorist action that the international community must condemn”, in comments by its Foreign Minister Faisal Mekdad reported by state media.

Qatari Foreign Minister Mohammed bin Abdulrahman Al-Thani said the killing “will only contribute to pouring more fuel to the fire at a time when the region and the international community are looking for ways to reduce tensions and return to the table of dialogue and diplomacy”.

The assassination of Fakhrizadeh is the latest in a series of killings of nuclear scientists in Iran in recent years that the Islamic republic has blamed on Israel.

Iranian media have given little information regarding his work, but the head of Iran’s atomic organisation Ali Akbar Salehi said they had “good cooperation especially in the field of nuclear defence”.

He told state TV that Fakhrizadeh had a Phd in “nuclear physics and engineering” and worked on his thesis with Fereydoun Abbasi-Davani, the former head of the atomic organisation and himself a survivor of an assassination attempt in 2010.

US media reports described Fakhrizadeh as the “No. 1 target of the Mossad”, Israel’s spy agency, and the “brains behind Iran’s nuclear programme”.