De Lima writes to Biden, says his triumph over Trump a ‘beacon’ for PH democracy

MANILA, Philippines — Senator Leila de Lima called a “beacon” for Philippine democracy the victory of US President-elect Joe Biden against exiting President Donald Trump, whose leadership the senator likened to that of President Rodrigo Duterte.

In a personal letter De Lima sent to Biden on Nov. 18, the detained senator extended her respect and admiration to him following his electoral triumph.

“We closely follow your words and speeches and find them speaking to us also. As you know, President Duterte is cut out from the same cloth as President Trump in their politics of lies, hate, and demonization, as well as in their cornucopia of insanities in between,” she wrote. 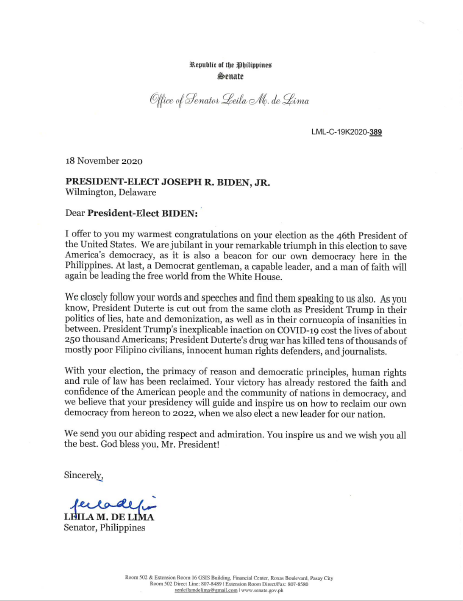 The opposition senator, who claims to be a victim of political persecution, has been in detention since February 2017 for what she claimed were trumped-up drug charges by Duterte administration.

Last January, the US Senate approved a resolution calling on the White House to impose sanctions on Philippine government officials responsible for extrajudicial killings in the Philippines, as well as the arrest and detention of de Lima.

The US Senate Resolution No. 142 invoked the Global Magnitsky Human Rights Accountability Act, which allows the United States to impose sanctions on foreign officials implicated in human rights abuses.

‘A return to democratic normalcy’

De Lima also told Biden that his election win “signaled a return to democratic normalcy and rule of law” in the US.

“We are jubilant in your remarkable triumph in this election to save America’s democracy, as it is also a beacon for our own democracy here in the Philippines. At last, a Democrat gentleman, a capable leader, and a man of faith will again be leading the free world from the White House,” she said.

“Your victory has already restored the faith and confidence of the American people and the community of nations in democracy, and we believe that your presidency will guide and inspire us on how to reclaim our own democracy from hereon to 2022 when we also elect a new leader for our nation,” she added.

Biden is the 46th President-elect of the US after defeating incumbent Trump in the recent 2020 US presidential election. He also served as Barack Obama’s vice president from 2008 to 2016.

Read Next
Lopez: DTI eyes reopening of more businesses before 2021
EDITORS' PICK
Fairways & Bluewater Resort Boracay shines in the International Arena
Through the lens of BJ Pascual: From famed celebrities to young business magnates
2020 Filipinos of the Year: Health-care front-liners
Experience clearer calls nationwide with Smart VoLTE
Essential workers: The many faces of pandemic heroism
Finding ‘3rd generation’ crucial in contact tracing, says Magalong
MOST READ
For P500, you can book this QC garden for private dining
Lacson twits Garbin ‍on Cha-cha claims
PH named 2nd most ‘Instagrammable’ place in the world
US capitals on edge for armed protests as Trump presidency nears end
Don't miss out on the latest news and information.