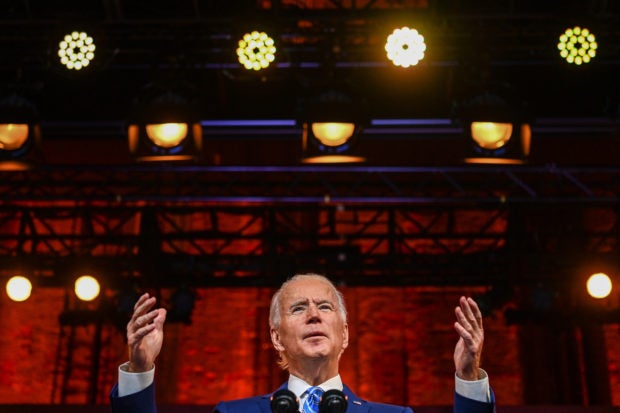 US President-elect Joe Biden delivers a Thanksgiving address at the Queen Theatre in Wilmington, Delaware, on November 25, 2020. – Biden called for an end to the “grim season of division” in the holiday speech . “I believe that this grim season of division, demonization is going to give way to a year of light,” Biden said. (Photo by CHANDAN KHANNA / AFP)

WASHINGTON – President-elect Joe Biden said Wednesday that Americans “won’t stand” for attempts to derail the US election outcome, as Donald Trump called for the results to be overturned.

In a speech on the eve of the Thanksgiving holiday, Biden said in his hometown of Wilmington, Delaware that Americans “have full and fair and free elections, and then we honor the results.”

“The people of this nation and the laws of the land won’t stand for anything else,” he said.

The Democrat’s statement signaled a hardening line against Trump who for more than three weeks has been touting conspiracy theories, with no meaningful evidence, that Biden stole victory on November 3.

Trump, who also issued a full pardon for former security aide Michael Flynn, convicted of lying to the FBI over Russia contacts, dug his heels in.

“We have to turn the election over,” he told Republican supporters in Pennsylvania.

“This election was rigged,” Trump said via telephone, repeating several claims of vote tampering that have been shot down in courtrooms across the country. Trump said “all we need is to have some judge listen to it properly.”

Trump had been due earlier to appear in person at the Republican meeting, which took place near the Civil War battlefield site of Gettysburg. He canceled at the last minute.

It was in fact held in a hotel in the small town and, rather than an official hearing, was merely a forum for Trump’s ardent supporters to push his evidence-free claims.

Biden won Pennsylvania by a margin of 80,000 votes on November 3, helping him assemble a convincing nationwide victory and making Trump a one-term president.

Trump, who tore up countless norms during his four years in power, is carving out new territory with his refusal to concede to Biden.

Supporters suggest he is already eying an announcement of running for president again in 2024.

Building his brand ahead of a new campaign might be one explanation for the real estate tycoon’s dogged pursuit of such a lost cause.

Giuliani and other Trump lawyers have seen baseless challenges to the vote counts rejected by courts across the country.

And while Trump is alleging — among other conspiracy theories — that voting machines deliberately deleted millions of his votes, the government election security agency declared this “the most secure” election in US history.

After coming under pressure from a slowly building trickle of senior Republicans, Trump on Monday ended his blockade of government assistance to ease Biden’s preparation for assuming the presidency on January 20.

But Trump has yet to take even the simplest steps in normal post-election protocol, starting with a phone call to Biden.

“No, I have not heard anything from President Trump,” Biden told NBC News.

Given Trump’s threats before the election not to recognize the results, Biden told NBC he is “not surprised by the response of the president.”

Since the election, Trump has largely disappeared from his usual work schedule and has not once taken questions from journalists.

He flexed his political muscle Wednesday, however, with the pardon to Flynn — potentially the first of more to come for friends and associates caught up in the various scandals of the administration.

“It is my Great Honor to announce that General Michael T. Flynn has been granted a Full Pardon,” Trump tweeted, wishing the disgraced former national security advisor a “truly fantastic Thanksgiving!” holiday.

Flynn pleaded guilty in 2017 to lying to the FBI over his Russian contacts.

Read Next
Trump pardons Michael Flynn, who lied to FBI over Russia
EDITORS' PICK
Metro Manila to remain under COVID Alert Level 2 until December 15
Legarda: Ending Violence Against Women, a cause for all
A delightful blessing!
Duterte open to making jabs mandatory; Cabinet mulls ‘pressuring’ the unvaccinated
IATF tightens border control, suspends entry of fully vaxxed nationals from ‘green’ countries
Villar Group gears up for AllValue Shopping Party on Dec. 3; around P 1-million promos and discounts up for grabs
MOST READ
Quiboloy warns of ‘much worse than Omicron virus’ if his ‘persecution’ is not stopped
Bongbong Marcos’ conviction in tax case not a crime involving moral turpitude — lawyer
Marcoleta defends pol ads on ABS-CBN
IATF tightens border control, suspends entry of fully vaxxed travelers from ‘green’ countries
Don't miss out on the latest news and information.