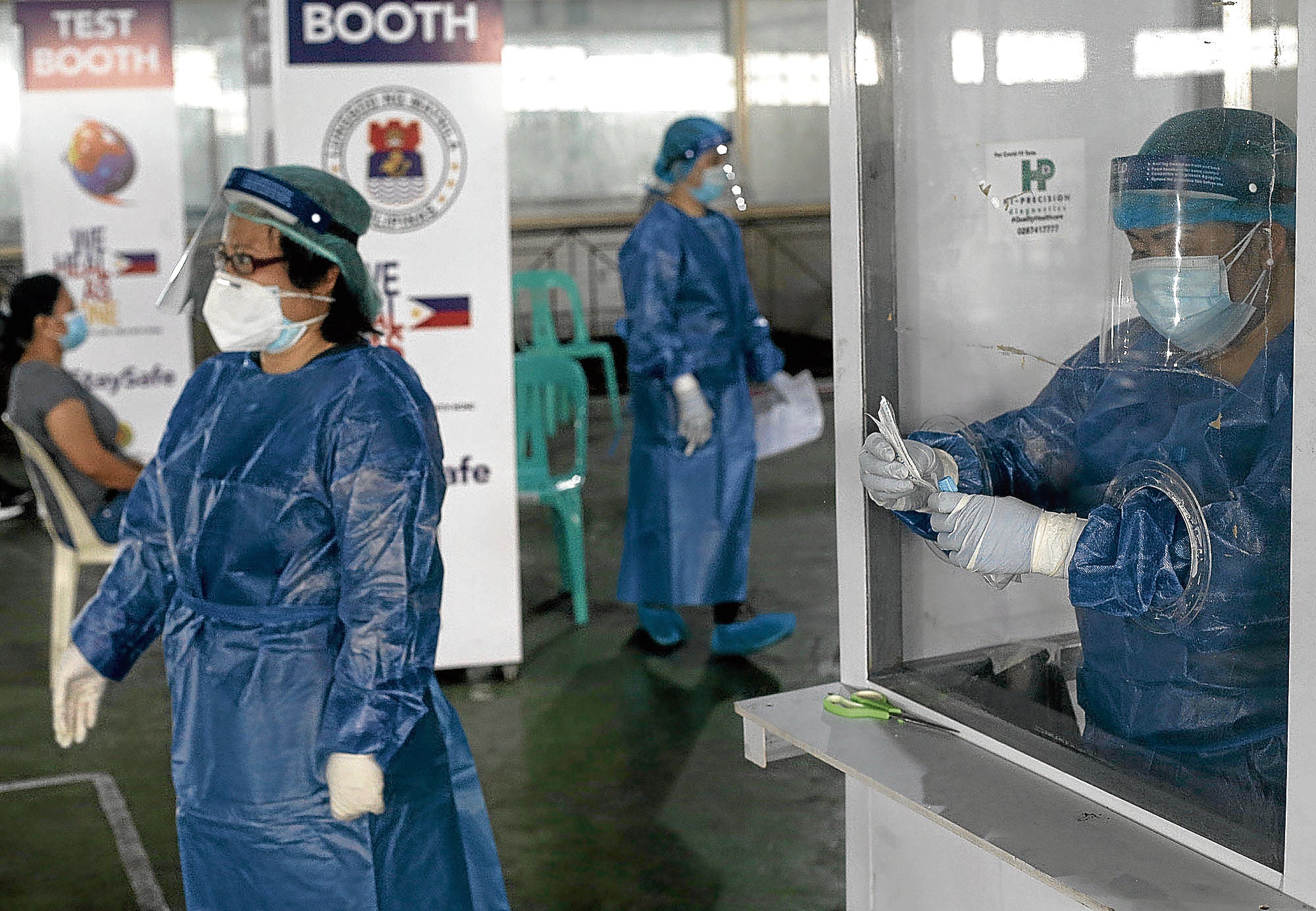 DUTY AT HOME File photo shows health workers conducting free swab tests in Manila about a month before the easing of the deployment ban. —RICHARD A. REYES

Labor Secretary Silvestre Bello III on Tuesday urged nurses to launch strikes against “exploitation” and for better pay and working conditions in private hospitals as the plight of health-care workers again drew attention after the government set a cap on the number allowed to work abroad during the pandemic.

In a radio interview, Bello also said he supported legislation to raise the salaries of nurses in private hospitals to the same level as those serving in government, who recently received a wage upgrade.

He slammed big private hospitals for demanding training fees from new nurses to gain work experience. The amounts range from P6,000 and P10,000 to as high as P18,000 a month, he said.

“That is why this becomes a cause for exploitation. Private hospitals exploit nurses. Instead of getting paid, they are the ones paying for a training fee,” Bello said.

“That is why I encourage nurses to go on strike so these five-star hospitals cannot operate. Go on strike and let these hospitals learn the value of your profession,’” he added.

Davao City Rep. Paolo Duterte, the President’s son, has filed a bill to set a minimum wage for nurses in the private sector and to raise their salaries to the level of their counterparts in public hospitals.

Duterte said private sector nurses were being paid an average of P9,757 a month.

Presidential spokesperson Harry Roque said he didn’t know whether the President would certify the bill as urgent, but he was aware that Bello supported it.

Bernard Olalia, chief of the Philippine Overseas Employment Administration, also supported the bill, saying it would help convince nurses to work in the country.

Roque said the number of nurses and other health-care workers who would be allowed to work abroad would be limited to an “initial” 5,000 annually.

The cap may be eased once a vaccine against COVID-19 became available, Roque told reporters in Malacañang.

He said a resolution on the deployment cap from the Inter-Agency Task Force for the Management of Emerging Infectious Diseases had been signed by the President and would soon be published.

Roque clarified that the cap was only for new hires, not for returning health-care workers.

Other lawmakers had pressed the government to provide better compensation and benefits to health-care workers, particularly those under the emergency hiring program of the Department of Health (DOH).

Sen. Joel Villanueva, the Senate labor committee head, said the DOH program was worse than “endo,” or the scheme to abort the regular employment of workers.

Villanueva last Friday said “the most effective way to make our health-care workers stay and work in our country is to offer better employment terms including competitive salary and benefits, and its timely payout.”

The senator blasted the DOH for its “persistent failure to augment the health human resource needed for the country’s COVID-19 response,” likening its hiring practices to those of greedy private corporations.

“What the DOH is doing to our health-care heroes is worse than ‘endo,’” Villanueva said, referring to the practice of some companies to terminate workers at the “end of contract,” or before the sixth month of their employment to circumvent labor laws compelling them to regularize their employees.

The senator said he had been writing the DOH since May to urge the agency “to ensure the salary and benefits of health-care workers are commensurate to the risk” posed by COVID-19.

Sen. Risa Hontiveros, in a statement on Tuesday, echoed Villanueva’s sentiments about the need to push for better working conditions for our health workers.

“It is an injustice that 16,000 health workers under the emergency hiring program of the DOH still have not been paid their hazard pay and special risk allowance,” she said.

“On the other hand, a cap of 5,000 health workers was placed on those who can go abroad. We must ensure first that the promise of better benefits for our health workers will be met before any such limitation or restriction,” Hontiveros said in Filipino.

“In order to strengthen our country’s response against COVID-19 and encourage our health workers to work locally, the government must invest and allot its resources to provide a more competent salary and benefits package to ensure that their welfare is being taken care of,” she said.

In Senate Bill No. 1837, Sen. Cynthia Villar proposed that the minimum wage for nurses in the private sector be determined by the National Wages Productivity Commission.

Sen. Richard Gordon’s Senate Bill No. 562 sets aside 10 percent of the internal revenue allotment of local governments to compensate nurses whom they employ.

Other bills like Senate President Pro Tempore Ralph Recto’s Senate Bill No. 832 and Sen. Sonny Angara’s Senate Bill No. 325 propose reforms to develop the nursing profession by increasing the protection of their employment and raising the standards of nursing education. —REPORTS FROM DONA Z. PAZZIBUGAN, JEROME ANING AND DJ YAP INQ