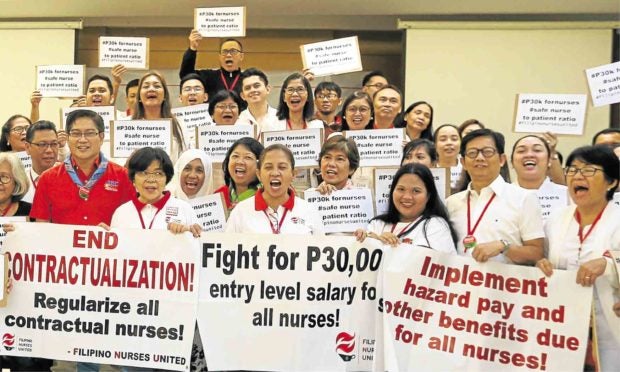 PAY HIKE DEMAND Members of the Filipino Nurses United call for a P30,000 entry-level salary for nurses in October, 2019, the start of the organization’s two-day congress in Manila. —EDWIN BACASMAS

Labor Secretary Silvestre Bello III said this has been his advice to nurses allegedly being exploited by “five-star” hospitals who supposedly ask for training fees as high as P18,000 a month.

(If you have no experience, you will not be accepted for jobs abroad, that is why a lot of nurses left here, are new and have no experience. That is why this is also a cause for exploitation. They are being exploited by private hospitals. Instead of them being paid, they are the ones paying for a training fee.)

“That is why I encourage nurses to go on strike para ‘di maka-operate itong mga five-star hospitals,” he added.

(That is why I encourage nurses to go on strike so these five-star hospitals cannot operate.)

According to Bello, some hospitals supposedly ask nurses to pay training fees ranging from P6,000 to P18,000 a mont.

“Kaya sinasabihan ko yang mga nurses, ‘Go on strike and let these hospitals learn the value of your profession,’” he added.

(That’s why I advise nurses to ‘Go on strike and let these hospitals learn the value of your profession.’)

Bello added that his department has furnished a proposed bill to presidential son and Davao City Rep. Paolo Duterte seeking to increase the salary of private nurses to the level of pay being received by nurses in government hospitals.

“Ok naman ang pay and benefits of nurses in the government sector. Yun lang ating mga nurses and medical workers in the private sector na hindi lamang underpaid, they are even exploited,” the labor chief said.

(The pay and benefits of our nurses in the government sector are ok but those in the private sector are not only underpaid, but they are also exploited.)