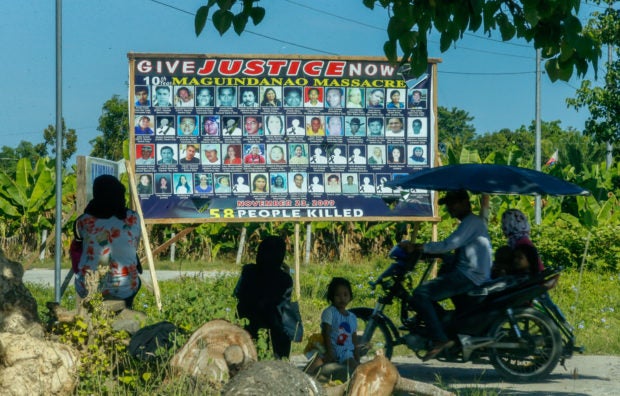 A billboard with pictures of the 58 victims of the Nov. 23, 2009, Maguindanao
massacre stands on a side of the road to Barangay Salma Ampatuan in Maguindanao province,
where they were stopped by gunmen that included members of the Ampatuan political
clan, hauled up a rise above the road, and mowed down. INQUIRER file photo / JEOFFREY MAITEM

MANILA, Philippines — Exactly 11 years after the single deadliest event for journalists, victims face both old and new challenges in their quest for justice.

On November 23, 2009, 58 individuals were mercilessly killed in the town of Ampatuan, Maguindanao. Thirty-two of the victims were journalists.

The Maguindanao massacre, also known as Ampatuan massacre, was dubbed as the worst election-related violence in the country and single deadliest attack against the media.

In this year’s commemoration of the massacre, a resolution by the Department of Justice (DOJ) was released regarding the second wave of complaints.

Still, victims continue to find answers and justice as new issues unravel before them.

In an online forum on Monday, Grace Morales, a relative of two slain journalists, detailed the condition of the victims’ families in the past years.

According to Morales, financial support was overwhelming during the first few years after the incident. However, it eventually waned, forcing other children to drop out of school.

(When it comes to the children’s education, there was support during the first year. We are very thankful for that, however later on, we started to look for funds. There are children who stopped going to school because they can no longer afford it.)

Morales also shared that they are still coping with the trauma caused by the incident. Some families and members of their legal team also receive threats up to this day.

(Families transfer from one place to another because of the threats, not only toward us but also to our lawyers.)

The battle for the 58th victim

After last year’s promulgation, the victims continued to appeal for the inclusion of Midland Review’s Reynaldo Momay in the case as the 58th victim.

“I pray and believe that the same Constitution will bring justice for me and for my father. I can only wish that one day, that 57 will be up by one,” said Maria Reynafe Momay Castillo, daughter of the 58th victim.

“For me, to forget is not an option. It is never an option, and it will never be an option,” she added.

Aside from the DOJ’s decision to indict only eight out of 48 individuals in the second wave of complaints, Atty. Nena Santos, legal counsel of families of victims, questioned some aspects of the resolution.

Santos said she is puzzled as to why the prosecutors found no probable cause to charge the other 40, despite the lack of counter affidavit.

(The irony is, out of the 48 only eight had probable cause. The 40 others were found to have no probable cause and was dismissed.)

Most of the cleared names in the resolution were from the Ampatuan clan. Cotobato City Mayor Cynthia Guiani-Sayadi was also included in the list.

(What we’re wondering about is that in the decision, there were only three paragraphs of legal bases to dismiss the case. But the cited case is very doubtful.)

(This is questionable because everyone who did not file a counter affidavit were still removed from the case. Is that allowed? Is it not supposed to be automatic to have probable cause if there is no counter affidavit?)

Despite the updates on the case,  Santos clarifies that the case is still unsolved.

“The case is still unsolved because it is still on appeal,” she reiterated.

“Until the final decision of the Supreme Court on the matter is promulgated, released, and has attained finality, that’s the only time we can say that this case is finally resolved,” she added.

According to Santos, there are three key details that are still unresolved: the pending appeals submitted at the Court of Appeals, the accused individuals who are still at large, and the motion of reconsideration for the second wave.

Santos reminded the media to be active when it comes to reporting about the case.

(I’m asking the media to always remind the people that there are pending appeals in the Court of Appeals that are needed to be watched.)