US Secretary of State Mike Pompeo, who was in Israel last week, was also at the reported talks, a diplomatic correspondent at Israeli public broadcaster Kan said on Monday.

The broadcaster cited unnamed Israeli officials as saying that Netanyahu and the head of the Mossad spy agency, Yossi Cohen, “flew yesterday to Saudi Arabia and met Pompeo and MBS in the city of Neom,” referring to the often used initials of Prince Mohammed. 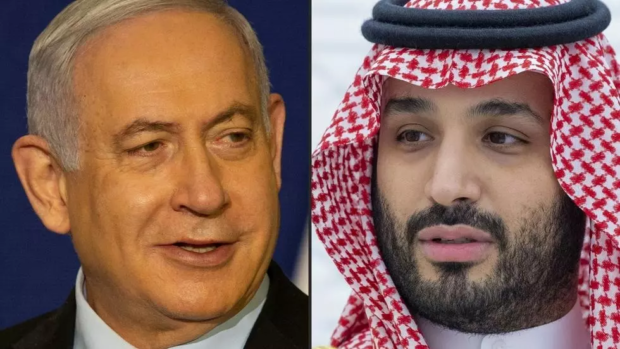 The reported meeting comes weeks after Israel agreed on historic US-brokered deals to normalize ties with two Saudi allies in the Gulf, the UAE, and Bahrain, pacts known as the Abraham Accords.

Multiple other Israeli media outlets reported on a Netanyahu trip to Saudi Arabia, including prominent diplomatic correspondent Barak Ravid of Walla News and Axios, who reported Netanyahu and Cohen flew on a plane belonging to an Israeli businessman Udi Angel.

Netanyahu’s office was not immediately available to comment on the reports.

The Saudi royal court and media ministry did not immediately respond to AFP’s request for comment on the reported meeting between Netanyahu, Prince Mohamed, and Pompeo.

Pompeo had traveled to Neom on Sunday from the UAE as part of a Middle East tour.

The Abraham Accords were brokered by outgoing US President Donald Trump’s administration.

US and Israeli officials have repeatedly indicated that more Arab states were set to forge ties with Israel. Sudan has agreed to do so in principle.

Publicly, Saudi Arabia has said it would stick to the decades-old Arab League position of not having ties with Israel until the Jewish state’s conflict with the Palestinians is resolved.

Israeli experts have raised questions about the prospects of expanding the Abraham Accords under US President-elect Joe Biden’s administration, particularly with respect to Saudi Arabia.

Trump’s administration downplayed the role of human rights in international diplomacy, and in particular was cautious about criticizing Saudi Arabia’s rights record, notably over the murder by Saudi agents of prominent journalist and Saudi royal critic Jamal Khashoggi.

Multiple Israeli analysts have said that a Biden administration, which will face pressure from the progressive left in the Democratic Party, would suffer a backlash if it pushed for an Israeli-Saudi peace deal without any meaningful rights reforms agreed by Saudi Arabia.

With Trump’s term set to end on January 20, some Israeli experts have speculated that Washington would lobby hard for an Israeli-Saudi deal before Biden takes office.

Israel and the Arab Gulf state have engaged in quiet diplomacy for years over their common foe Iran.